Slick renovations and a new chef put this rainforest retreat back on the map. 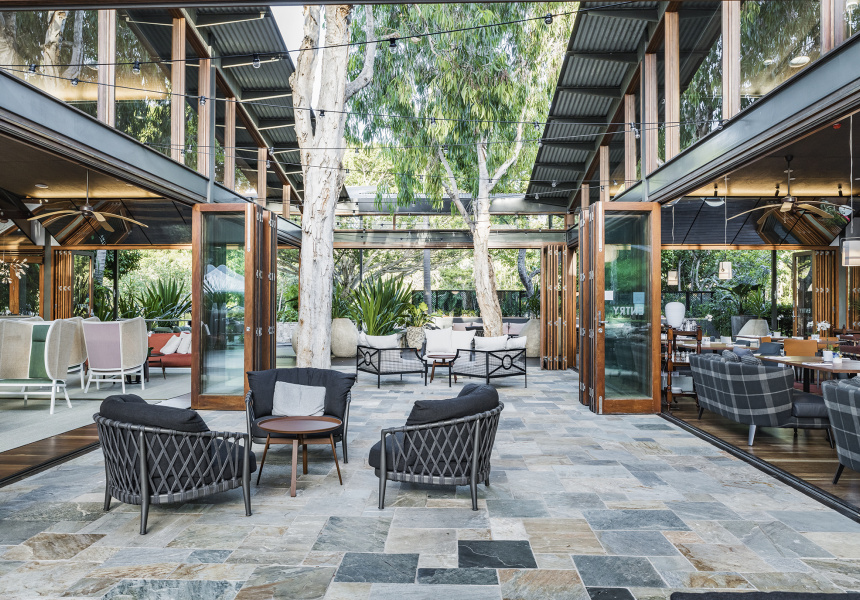 After boldly declaring he was leaving Sydney forever in July, chef Matt Kemp has found a new home at the Byron at Byron Resort & Spa. The chef, formerly of Balzac and Banc, has taken on the role of executive chef, working alongside head chef Gavin Hughes.

“We will be concentrating on flavours that are beautiful, light, healthy and fragrant to create a cuisine unique to the resort and Byron Bay,” says Kemp. Linguine comes with Ballina king prawns, fennel, chili, tomatoes and bottarga. “The produce on our doorstep is like nothing else,” says Kemp.

Kemp’s arrival coincides with a timely refresh for the 91-suite resort. Away from the main drag and set in a 18-hectare rainforest, it’s an oasis in the heart of Byron. The restaurant, bar and reception areas have just emerged from a six-week renovation by led by interior designers Luchetti Krelle (Longrain Tokyo, Banskii), bringing it up to date.

“The concept of the refurbishment was to personify the well-travelled Australian and to bring a more residential quality to the resort’s hub,” says general manager Lyn Parche.

A striking copper island bar sets the new tone. On the veranda, Italian furniture, European lighting from SPACE, antiques, art and curios are scattered throughout; it’s as though they’ve been collected over many years.

Julian Meagher, winner of the 2015 Archibald Prize for his portrait of Silverchair frontman Daniel Johns, has been commissioned to create a series of contemporary still lifes featuring Australian natives. The works hang on the veranda alongside double-sided landscapes, marking the transition from inside to out. A Look Inside: Pretend You’re in Sorrento, Italy, at the Conti’s Glamorous New InterContinental Hotel