Twelve New Australian Hotels To Check Out (and Into) in 2022

It was a buzzy year for hotel openings after a relatively subdued 2020. From a Palm Springs-inspired retro beauty to a glorious Melbourne return for the Hilton brand, here’s where to stay on your next trip away. 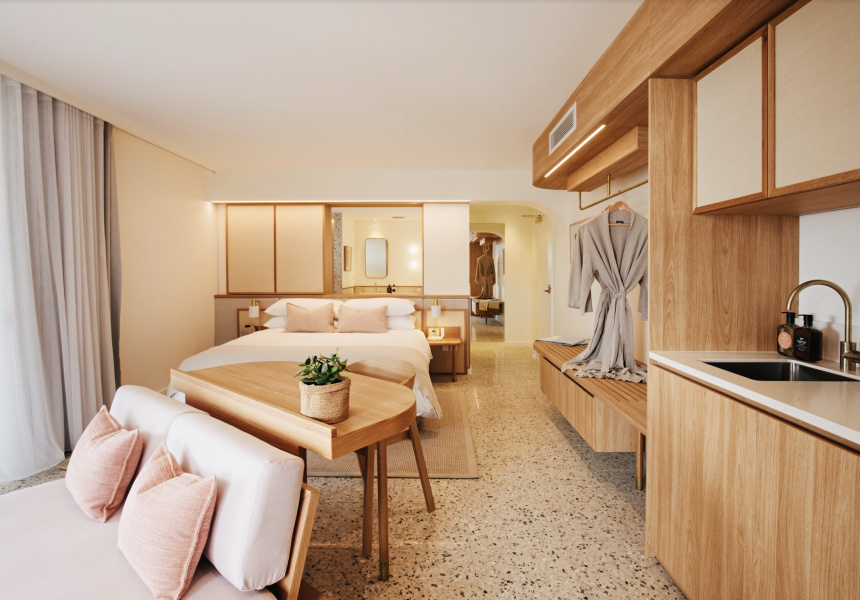 Hotels bounced back in 2021. Not even Melbourne and Sydney’s respective lockdowns were enough to stop a raft of openings around the country.

It means that, as borders come down, there’s a bunch of options that will help you make the most of your next interstate holiday.

Here are 11 of the best new hotels to try around the country.

The Mysa Motel – Gold Coast
A retro-inspired, pastel-hued resort, Mysa is the classic Gold Coast ’80s cream-brick motel of your childhood transformed into a dreamy Palm Springs-style retreat. Husband-and-wife team Jason Raine and Eliza Raine have nailed the treatment: the signage is pink and neon, the furniture restored vintage, and breezeblock walls feature throughout the property.

There are just seven light-filled rooms, painted in lavender, peach, mint and carnation, each decorated with images of the surrounding area by photographer Trent Mitchell. Some rooms have private courtyards and all have a smart TV. There’s also a classic kidney-shaped swimming pool that’s been converted into a magnesium mineral pool. The property has sustainability in mind, too. Rainwater services the toilets and garden, while solar panels power the motel rooms.

The motel is just a short stroll to the beach and a 10-minute drive from the Gold Coast Airport.

Hotel X – Brisbane
In a quieter year for hotel openings in Brisbane, Hotel X was a clear standout with its flash digs, and brilliant food and beverage options. It’s also ideally located high on the hill in Fortitude Valley, near the clubs of Brunswick Street, the restaurants of James Street, and heaving riverside precinct Howard Smith Wharves. That position means it boasts a brilliant outlook from rooftop bar and restaurant Iris, although you should also make time for ground-floor sister venue Bisou Bisou: what it lacks in views it makes up for with a menu of terrific French food.

Downstairs is Lona Misa, Shannon Martinez and Ian Curley’s superb vegan restaurant, and Chapel Street’s nightlife is only a short walk away.

Hilton Melbourne Little Queen Street – Melbourne
The Hilton brand returned to Melbourne in May with this 244-room hotel split between the magnificent, heritage-listed Equity Chambers and a modern high rise. The restored and refurbed chambers scream old-school glamour, drawing on both the Exotic Revival and Romanesque architecture styles. There’s also a bunch of heritage suites in this part of the hotel, finished in timber panelling, modern carpet and low-slung velvet-upholstered furniture. The rooms in the tower have been given a more modern, brightly lit treatment, and you’ll get skyline views from the higher floors.

The on-site restaurant, Luci, is set in the Equity Chambers’ old grand hall and serves a Melbourne-produce driven menu in a beautiful Gatsby-esque space. There’s also a buzzy main bar and the more intimate Douglas Club cocktail bar, if you want to kick on.

The Tasman Hotel – Hobart
Coming in late in the year is this 152-room luxe Hobart hotel fronting Murray Street in Parliament Square and right near the city’s famous Salamanca Market. It’s part of Marriott’s Luxury Collection and comprises three buildings – a historic hospital, a 1940s art deco building and a new glass-ensconced pavilion. The rooms are smart, and there’s plenty of spots you can take in views of the harbour.

Its Italian restaurant, Peppina, features food by Tassie chef Massimo Mele (Grain of the Silos, Launceston) and head chef Glenn Byrnes, who has worked at local fine diners Garagistes, Aloft and Fico. Even if you’re not staying here, it’s worth visiting for its cosy sandstone bar, fireplaces and a rare spirits library, with cocktails created by leading drinks consultant Charlie Ainsbury (This Must Be The Place, Eau de Vie, Bulletin Place). It’s great to see some new accommodation options in the Tassie capital.

Outside, The Princess Theatre, Her Majesty’s Theatre and Comedy Theatre are all right on the doorstep, the hotel also conducting a well-regarded Hidden Secrets walking tour of the CBD to help guests make the most of it all.

Crystalbrook Kingsley – Newcastle
Newcastle’s first ever five-star hotel occupies the iconic old Newcastle Council administration building on King Street, right in the heart of the city. The cylindrical modernist architecture is just the same but inside the building has been completely transformed, its 130 rooms decked out in wool carpets, reclaimed timber, and suede lounges. Each features AH Beard beds, in-room tablets, Google Staycasts and 100 per cent waste-free bathrooms, with the building’s fetching charcoal and yellow palette referencing the city’s coal-mining past.

Movenpick Hobart – Hobart
Yes, your kid sister’s favourite ice-cream brand also makes hotels – has done for years – and they tend to be good ones. Take this 221-room inn that opened at the start of the year in Hobart. The rooms’ understated fit-outs favour textures over colour, and reflect the surrounding Tasmanian landscape with the palette struck through with black and timber highlights. All rooms include free wi-fi, IPTV and on-demand minibar, with the bigger suites also featuring a freestanding bathtub. This is the third tallest building in Hobart, so the higher levels offer terrific views of the CBD, the Derwent River and Mount Wellington.

The hotel is just a short stroll away from the waterfront and the historic Salamanca precinct, but there’s also a slick restaurant, Tesoro, on-site, where a Chef’s Roadtrip set menu takes you on a food tour of Tasmania.

Sequoia – Adelaide Hills
Designed to create “the feel of being in the treetops”, each of Sequoia’s suites has a day bed on a cantilevered balcony that’s perched directly above an escarpment overlooking Piccadilly Valley. The idea is to make you feel like you’re in the middle of nowhere, even though Mount Lofty House’s new six-star digs are just 30 minutes from Adelaide Airport.

Inside, the suites feature AH Beard king beds, freestanding bathtubs, sunken lounge rooms designed around fireplaces faced with Basket Range stone, and fancy TVs that slide into a bench at the touch of a button. There’s also a “moon window” in the ceiling that lets you watch the night skies. Original paintings of Piccadilly Valley flora by local artist Stephen Trebilcock adorn the walls, and sculptures and glassware from the Jam Factory are placed throughout each suite.

The public areas are just as impressive, with a reception area that overlooks the valley, and an infinity pool and two onsen fed by an on-site spring. At the centre of the common area is a dining table long enough to seat all 28 guests for dinner.

The 251 guest rooms range from smart Superior rooms to a lavish 110-square-metre Presidential Suite with a dining room, walk-in robe and study. They’re dominated by a minimalist black-and-white colour scheme broken only by a striking burgundy chandelier.

A by Adina – Sydney
A by Adina takes the apartment-focused stays of its namesake brand and gives them a glamorous do-over in the middle of the Sydney CBD.

The swish rooms are fitted out in low-key, comfortable olives, golds and greys with floor-to-ceiling windows, and feature at least a kitchenette, giving off a city-living vibe. The up-close views of Australia Square, Shell House and the workers tapping away in the surrounding skyscrapers only add to the effect.

Adina has underlined its ambitions for this place with the inclusion of the Maybe Sammy crew’s Dean & Nancy on 22. A brilliant restaurant and bar on level 22 of the hotel, it features two-storey-high windows that provide glimpses of the harbour between the surrounding buildings. It serves inventive share plates helped down by an interactive cocktails program.

Elsewhere, the hotel features a brilliant sky lobby (with a fancy gold staircase that leads up to Dean & Nancy) and a beautiful indoor swimming pool that doesn’t sacrifice those views. Outside, you’re close to the Opera House, the Botanic Garden and The Rocks, with food hotspots such as Long Chim, Restaurant Hubert, Rockpool Bar & Grill and Mr Wong all within walking distance.

The Surf – Yamba
The opening of 12-room boutique hotel The Surf reflects Yamba’s coming of age as a sophisticated holiday town.

The rooms are furnished with Scandi-style timber furniture upholstered in sea greens and soft sandy pinks; the bathrooms feature tiled curved walls and Italian terrazzo; and Bemboka throws and robes, Leif organic products and a locally sourced in-room minibar join homely touches such as vases, artworks and pot plants on the balcony. There’s also a rooftop terrace with a heated plunge pool, and EV chargers downstairs.

Outside, the sea pool and Main Beach are just a short walk away, as are the iconic Pacific Hotel and slick eateries such as Beachwood Cafe and Paradiso Restaurant & Bar.