Natalie Turnbull’s Guide to the Best-Designed Spaces in Milan 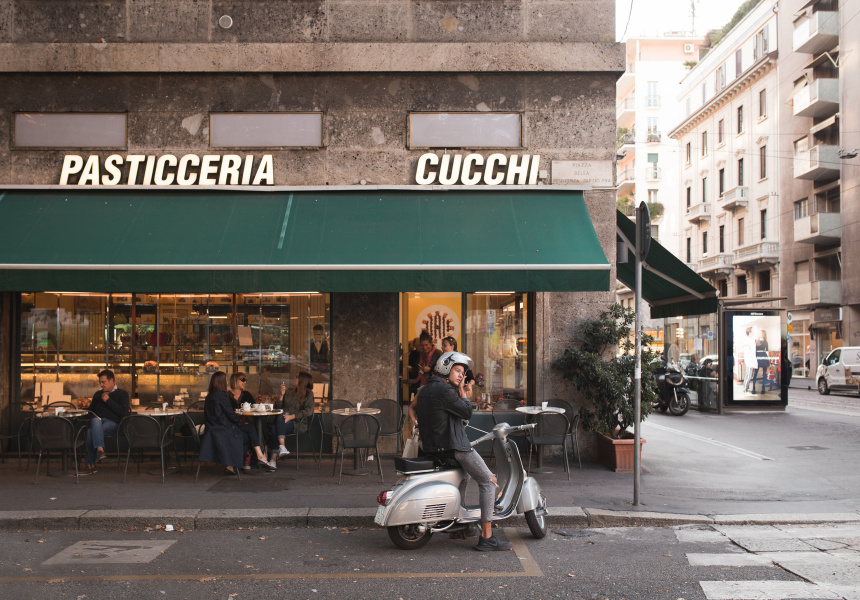 It can be tough describing exactly what Natalie Turnbull does – she just does so much. Turnbull describes herself as a stylist and an art director, but her work transcends those categorical boundaries. “I work freelance across a lot of different projects and clients, coming up with unique visual identities and languages for brands,” she says. As you’d imagine, that involves a lot of collaboration – and of course, a great deal of artistic know-how and inspiration.

Turnbull enjoyed a serious dose of the latter when she travelled to Milan in April to attend the Milan Furniture Fair – part of the city’s world-famous Design Week. It was her second trip to the design-focused city, which she says has a uniquely contemporary feel compared to other Italian cities.

“It feels quite separate from the rest of Italy,” she says. “Because it’s close to Germany, it’s got a lot of other influences. It’s not your classic Italian kind of place. It’s very focused on design and fashion and architecture.”

With that in mind, here are five spaces in Milan – from galleries and villas to restaurants and showrooms – that made a lasting impression on Turnbull.

Pasticceria Cucchi
The old-school fit-out of this bakery was recently transformed by interior designer Cristina Celestino to better match the eye-popping colours of its cakes. “It’s a super-cool cafe,” says Turnbull. “It’s got a Wes Anderson [style] eccentric feel. You can sit out on the street and it feels very Italian – everyone is dressed very interestingly.”

Famous for its artisanal, preservative-free panettone – an Italian Christmas cake that it also ships worldwide – Pasticceria Cucchi also serves coffee (of course), cocktails and wine. But what really makes this bakery memorable is its authenticity: “It gives you this feeling that you’re one of the Milanese people.”

Da Giacomo
Di Giacomo ticks all the boxes for a detail-oriented art director like Turnbull – it’s as renowned for its architecture and interiors as it is for its menu. “It’s this incredible restaurant,” says Turnbull. “The interior is a bit decadent and over the top. It’s classic Italian: really delicious pastas.”

Designed as a tribute to the Milanese trattorias of the early 1900s, this proud throwback especially soars when it comes to fresh fish and seafood, though the desserts are a close second. “Again, it’s that real Milan feeling of it being quite modern but also quite old, with a lot of history,” says Turnbull. “And the food is just amazing.”

Fondazione Prada
You don’t have to be an art-lover to appreciate this historic museum. In fact, many visitors are drawn by the in-house cafe, Bar Luce, a quirky spot inspired by mid-century Italian pop culture (replete with pinball machines and a jukebox), designed by the filmmaker Wes Anderson. “Everyone goes there,” Turnbull says. “It looks like you’re in a Wes Anderson movie, and all the waitstaff are dressed in his style. The food too: pink cake and all that.”

As for the museum, she saw a massive piece by Jeff Koons when she visited, as well as the iconic upside-down mushrooms of Carsten Höller’s permanent installation Synchro System. Plus, she says, “the actual building itself is incredible: it’s a must-do.”

Villa Necchi Campiglio
History thrives in Milan not so much through the typical Italian landmarks, but in the living legacy left by meticulous architects and interior designers – and Villa Necchi Campiglio, completed in 1935, is a perfect example of that. Designed by the architect Piero Portaluppi for the Necchi Campiglio family, the exteriors were inspired by 20th-century rationalism and the interiors by art deco. The home was bequeathed to Italy’s national trust in the early 2000s, and has been open to the public since 2008.

Turnbull gravitated to the villa because it was featured in director Luca Guadagnino’s 2009 film I Am Love. “It’s had a few different architects [since 1935] because it’s been done up a few times,” she says, “but [Portaluppi] designed the house and everything in it: every detail and object, down to the cups used. It has this amazing room downstairs which is like a living room – it was designed [almost] 100 years ago but feels so current and modern.”

Henry Timi Showroom
The influential Milanese furniture designer extends his idiosyncratic touch to every square centimetre of his namesake showroom – a minimalist triumph on all levels. “He really challenges the way people live,” says Turnbull. “He’s designed a kitchen totally different to any other kitchen you’ve ever seen. Lots of his pieces are really sculptural. With his showroom this year, he filled the whole space with dirt on the ground and all of his pieces just laid in the space. They’re all about using really raw, natural materials.”

Let go of your preconceptions about function before visiting Timi. “I’ve never seen anything like it,” she adds. “The whole experience of being in the space is really relaxing.”

This article is produced in partnership with Qatar Airways. Take advantage of Qatar Airways’ Early Bird sale and experience Europe like never before in 2020. Qatar Airways flies to over 160 destinations including 55 European cities twice-daily from Sydney, and daily from Melbourne, Adelaide, Perth, and Canberra. Book today at qatarairways.com/au or your preferred travel agent.