With killer views, fire pits and an outdoor hot tub. 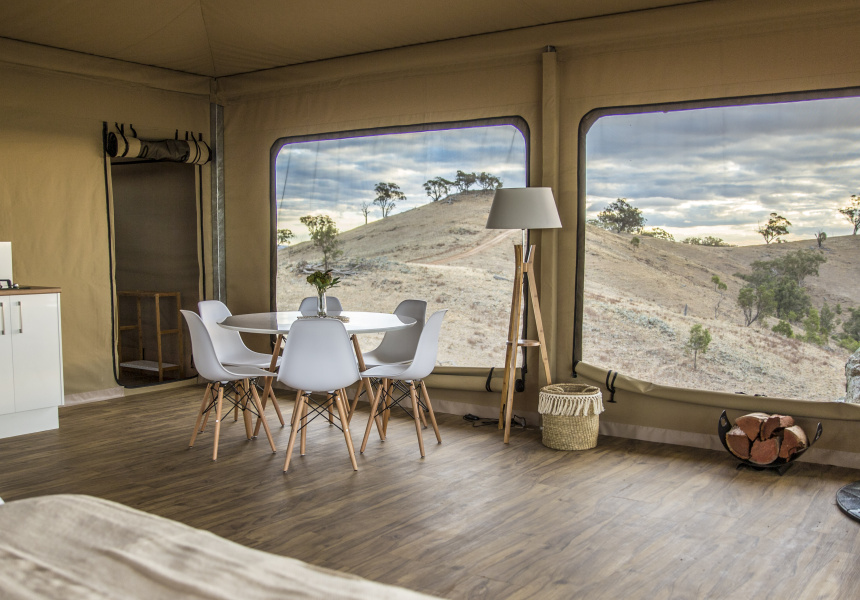 The luxury tents are on a beautiful 280-acre property that features wildlife, ridges, hills, creeks and lots of trees in the Central West wine region of NSW. It’s a 20-minute drive from Mudgee and just under four hours north-west of Sydney.

The tents are spacious. Dulili (which means “together” in Aboriginal language) accommodates seven people. And both tents have comforts you don’t usually associate with camping, such as a designer kitchen, a dining table, a fireplace, large-screened windows and a bathroom with a shower and flushing toilet. Uralla, which means “home on the hill”, is the premium tent; it has a fire pit and two free-standing tubs, one indoors and another on the deck. Co-founder of Sierra Escape Cameron D’Arcy says its ideal for stargazing or watching the sun set from.

The two latest lodgings join Sierra Escape’s other accommodation options: high-end tents with king-sized beds and glass sliding doors to take in the views of the surrounding bush. These new tents sit on top of a hill and offer panoramic views of the valley.

“Sierra Escape is designed to provide high-quality, off-grid accommodation for those who love the outdoors but still enjoy the luxuries of a hotel,” says CEO of Mudgee Tourism Cara George.

And there seems to be a lot of people looking for that type of retreat.

Since launching last year, D’Arcy says the uptake of bookings has been “mental”; the company has had about 90 per cent occupancy from April to November.

Aside from the views and the state-of-the-art amenities, D’Arcy says campers are often most impressed by the little things, such as the marshmallows to roast on the barbeque. “The setting is just perfect for guests to unplug and reset,” he says.

Now the two tents are launched, D’Arcy is on to his next project. He plans to bring in a shipping container to be used as a pool and to build an undercover deck on which guests can have barbeques and do yoga. There are also plans to host yoga retreats.

The new glamping sites are accepting bookings for January to April 2021. Dulili and Uralla start from $550 and $450 per night respectively. Since publication a pool and outdoor lounge have been installed.

This article first appeared on Broadsheet on May 14, 2018. Some details and prices may have changed since publication.