You’ll be surrounded by wildlife and world-class views, plus the eco-friendly abode is bigger than most – it sleeps up to four. The fit-out includes a luxe double shower and brekkie bar. 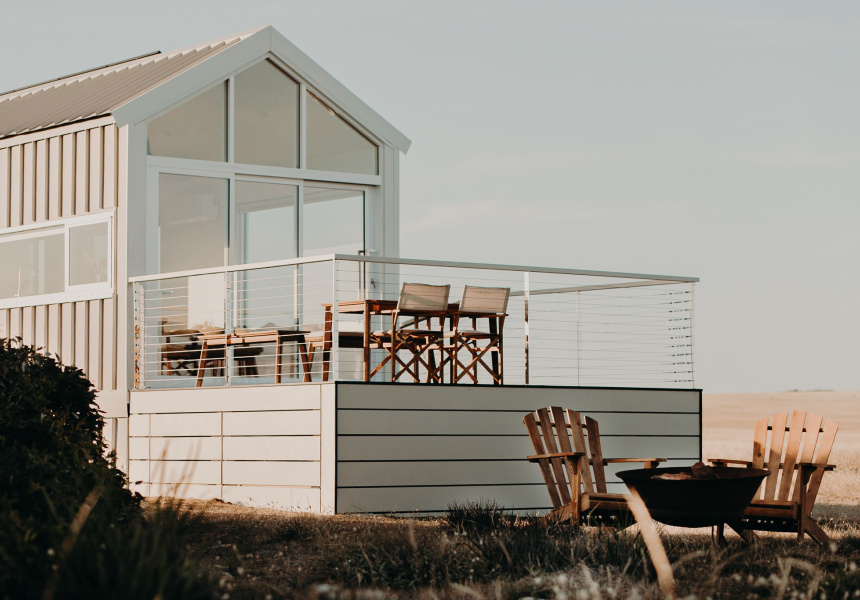 Australia’s appetite for tiny houses is insatiable. We’ve got so many choices, from Tiny Tristan on an organic farm in New South Wales to Cabn in the Yarra Valley wine region, and Unyoked’s Gili in the rainforest of the Noosa Hinterland. (Plus many others.) It seems there’s a miniature abode for everyone’s tastes – but there’s always room for more.

The latest addition is Yambara – a tiny house on South Australia’s Eyre Peninsula, which is the first offering from start-up company Eyre Way.

“It’s a magical spot, surrounded by national parks and pristine coastline. The views are absolutely world-class,” cofounder Amanda Hogg tells Broadsheet. “The wildlife is incredible, too. With sea eagles and ospreys sweeping down, and kangaroos hopping past.” During whale season, there are humpbacks galore, she says.

Hogg started Eyre Way with her partner Tim. “Yambara” means “away, out of sight” in Barngarla, the local Aboriginal language, and the property is located on remote farmland, about 30 minutes’ drive from Port Lincoln and 100 metres from its own private beach.

The couple created the eight-by-three-metre dwelling in collaboration with local designer and builder Duncan Moore. Its spectacular position is optimised with expansive windows, which afford views of Sleaford Bay, Whalers Way and Lincoln National Park in every direction, plus a roomy deck. There’s a fireplace overlooking the private beach, and an outdoor shower.

It’s spacious inside, too. Yambara sleeps up to four people: there’s a king-sized bed on the lower floor and a double-bed on a mezzanine level. Each one is dressed in 100 per cent flax linen by Bed Threads and I Love Linen. Other luxe touches include a double shower, a gold-splashed designer kitchen, a breakfast bar, and Moroccan tiles handmade by Victorian company Tiles of Ezra.

The house is also 100 per cent solar-powered and self-sufficient. “We wanted to offer travellers the experience of living simply, sustainably, and completely off-grid,” says Hogg. “There’s nothing permanently attached to the ground at all, so the house can be packed up and moved on a trailer.”

This desire to promote eco-friendly travel came from the owners’ own lifestyle. The couple and their three children have spent the best part of the past five years living in their caravan, called Frankie, on and around the Eyre Peninsula, while renting out their seaside house in Port Lincoln via Airbnb.

“We didn’t want to only explore the Eyre’s pristine bush and coastal settings on weekends or school holidays,” says Hogg. “We wanted to wake up at new locations every week.”

Since Yambara opened in November 2021, the Hoggs have been “blown away” by the response. The tiny house is booked out until mid-February, but work has already begun on creating a second tiny home, which is likely to be finished by autumn. And that’s not all – work will then start on two others, bringing Eyre Way’s collection to four.

Yambara is located in Eyre Peninsula. Rates start at $450 per night, with a minimum stay of two nights. Book here.