On a new tour departing Wilson's Prom, Victoria, get up close to one of Australia’s best kept, slightly eerie secrets. And spot seals, whales, dolphins and more along the way from a custom-built amphibious boat. 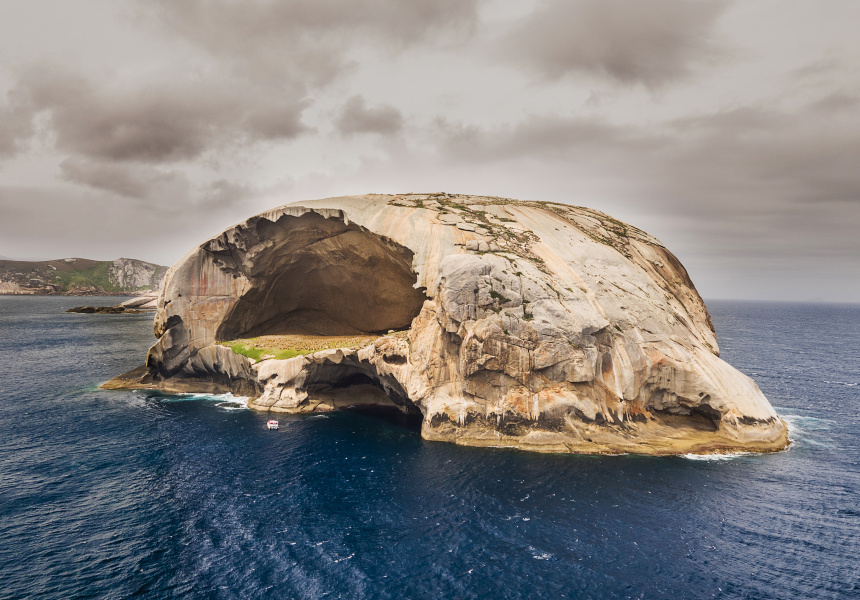 Seal-spotting on the way to Skull Rock

South-west of Wilsons Promontory in Victoria, the aptly named Skull Rock is granite rock formation that's a little other-worldly. And a new cruise will get you up close.

Pennicott Wilderness Journeys, which started out running cruises off the coast of Hobart and launched late last year in Victoria, has just added Skull Rock (also known as Cleft Island) to its list of tour destinations.

“There’s a huge cave on the western side that’s about 60 metres high, 130 metres long and 60 metres deep,” company founder Robert Pennicott says of the island. “It looks like where a brain would sit in a head … When you’re up close to it, you see about five or six skull shapes in the rock itself.”

Pennicott’s love of nature took shape when he was about 12. “I used to take a lot of friends, and their friends, fishing with me, and the scenery would blow people away,” he says.

He started taking tours around Tasmania’s Bruny Island a few years later, in 1999, and his tour groups now take to open water in eight vessels ranging from 20 to 43 seats. In Tassie, Pennicott’s team can take you to Bruny Island, Iron Pot (the state’s oldest lighthouse); Tasman Island and Three Capes Track.

Skull Rock is Pennicott’s first tour in Victoria, where he operates under the name Wilsons Promontory Cruises.

“I identified a few sites, but the one that my heart was really in was Wilsons Promontory,” Pennicott says. “Whenever I used to bring boats across Bass Strait I’d always spend a couple of hours there and find it very spiritual.”

Skull Rock really does grab your attention. It’s a mysterious looking monolith; a lone formation surrounded by ocean. Its inside is smooth, hollowed out by waves in years long past, with a carpet of greenery underneath. “I don’t think there’s anything else in the world like Skull Rock,” Pennicott says.

It’s largely untouched, too, located within the Wilsons Promontory Marine National Park, and an important breeding ground for birdlife.

Pennicott takes 30 passengers on a two-and-a-half-hour tour aboard a custom-built amphibious boat (it has wheels, so it can also travel on land). You're loaded into the boat, then driven onto Norman Beach and into the water.

“I’ve had the concept for 11 years and it’s taken about nine years and a lot of work,” Pennicott says, referring to the permits and funding required to set up the tour, as well as the crafting of his low-environmental-impact custom boat.

The tour follows the coast first, visiting South Point (the southernmost point of the mainland) and Wilsons Promontory Lighthouse. Then you’ll go past Wattle, Anser, Citadel, McHugh, Dannevig, Great Glennie and Kanowna islands. You'll almost definitely spot Australian fur seals along the way (Kanowna is one of their breeding grounds) as well as little penguins, mutton birds and the occasional fairy prion, which is a small seabird.

“We see dolphins probably eight out of 10 days,” Pennicott says. “Whales, in season, we see almost every day. And we do see seals every day.”

Wilsons Promontory Cruises run daily tours to Skull Rock departing from the Tidal River Visitor Centre, which is about three hours’ drive from Melbourne. Tickets cost $135 for adults, $85 for children up to 16, and $430 for families (two adults and three children). The cruise is suitable for all ages, but in rough weather may be deemed unsafe to run.