Inside Sequoia, a New Six-Star Luxury Lodge in the Adelaide Hills

The new addition to Mount Lofty House will open in March with an infinity pool, two onsens and 14 luxury suites – complete with sensors triggering custom aromas and soundscapes when guests enter. 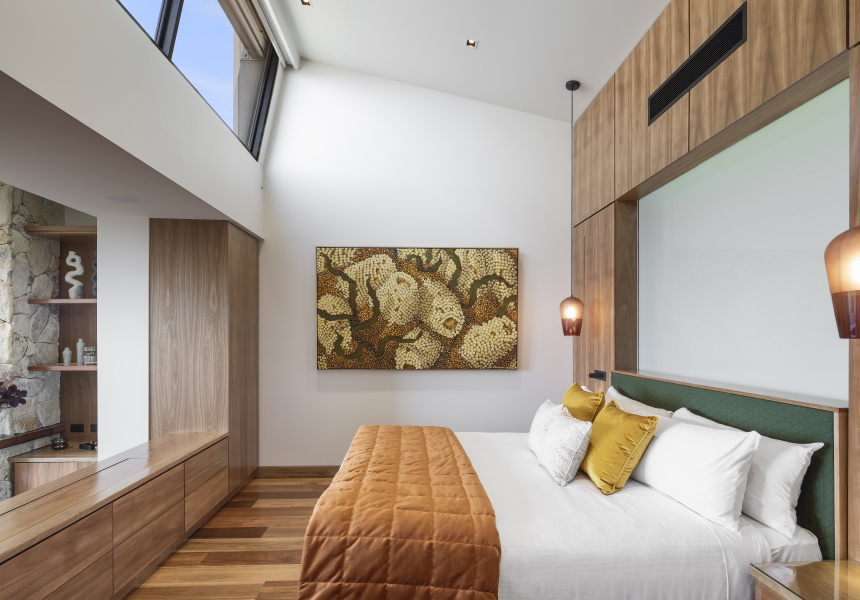 Why is the new luxury lodge in the Adelaide Hills named after a tree native to California? It turns out Arthur Hardy, who commissioned Mount Lofty House as his summer estate, was a keen botanist who planted many species around the grounds (part of which would later become the Mount Lofty Botanic Gardens). And among his most prized specimens were the giant sequoias growing just outside the manor at the centre of the estate.

They belong to the largest species of tree in the world, so when the boutique hotel decided to aim for the top with its latest addition, the name made sense. Perched on the very lip of the escarpment overlooking the Piccadilly Valley, Sequoia’s 14 luxury suites will officially open in March 2021.

Guests will enter a reception area looking out over the valley, with an infinity pool and two onsens fed by an on-site spring below. At the centre of the common area is a dining table long enough to seat all 28 guests for dinner. Fittingly, it uses 20-foot slabs from a sequoia that fell after the 1983 Ash Wednesday bushfires swept through the property, and that same tree also provided much of the timber panelling inside.

Mount Lofty House general manager Jesse Kornoff says the lodge was designed to create “the feel of being in the treetops”. To that end, each suite has a day bed on a cantilevered balcony directly above a steep drop at the edge of the Piccadilly Valley. “The idea is you can look out and feel like you’re in middle of nowhere,” he says, “but you’re still only 30 minutes from the airport.”

Inside, a sunken lounge room designed around a fireplace faced with Basket Range stone leads up to a custom-made AH Beard king bed, and behind that a freestanding bathtub hidden by a glass wall that frosts at the touch of a button. Each level looks out over the next, and if you want to watch TV from bed or the bath a screen emerges discreetly out of a bench, then descends out of sight to preserve the views. The “moon window” in the ceiling lets you watch the night skies.

Original paintings of Piccadilly Valley flora by local artist Stephen Trebilcock adorn the walls, and sculptures and glassware from the Jam Factory are scattered throughout each suite. But there are plenty of touches guests can’t see; Kornoff promises the 14 suites will be “the most technologically advanced in country”, with sensors triggering specially commissioned aromas and soundscapes when guests enter, and a night light that automatically turns on in the bathroom.

As comfortable as the suites are, Kornoff is expecting guests to spend most of their time exploring the surrounding area. That’s because Sequoia will offer a range of experiences with exclusive access to premium South Australian businesses. The on-site spa will be one of only two places in the world where the trademarked Jurlique rose is planted (the other is the Jurlique farm), and private visits to local icons Jurlique and Penfolds can be arranged.

Further afield, guests can take a helicopter to the Eden Valley for lunch at Hutton Vale Farm and a tasting at Henschke; visit the RM Williams factory and get a custom-made pair of boots; or follow the winding roads of the Adelaide Hills in a series of radio-connected supercars, swapping between a Ferrari 488 GTB, McLaren 570 and Lamborghini Huracan on the way. It is, Kornoff says, “sort of like Need For Speed … but safe” – guests will still have to observe road rules and speed limits.

And if you decide you never want to leave your room, that’s no problem. When the on-site Hardy’s Verandah Restaurant had to shut down due to Covid-19 restrictions, Sequoia’s guests were able to have a degustation delivered to their room for “fine dining in a bathrobe”, with sommelier Liinaa Berry opening and decanting bottles on request. As Kornoff puts it, “We offer money-can’t-buy experiences that it turns out money can buy.”

Suites at Sequoia are currently open for booking, and the lodge will fully open in March, 2021.