Swim year round (and all night long) in heavenly warmth at these natural hot springs around the country, including ones surrounded by forest, in remote desert, and with swish glamping tents. 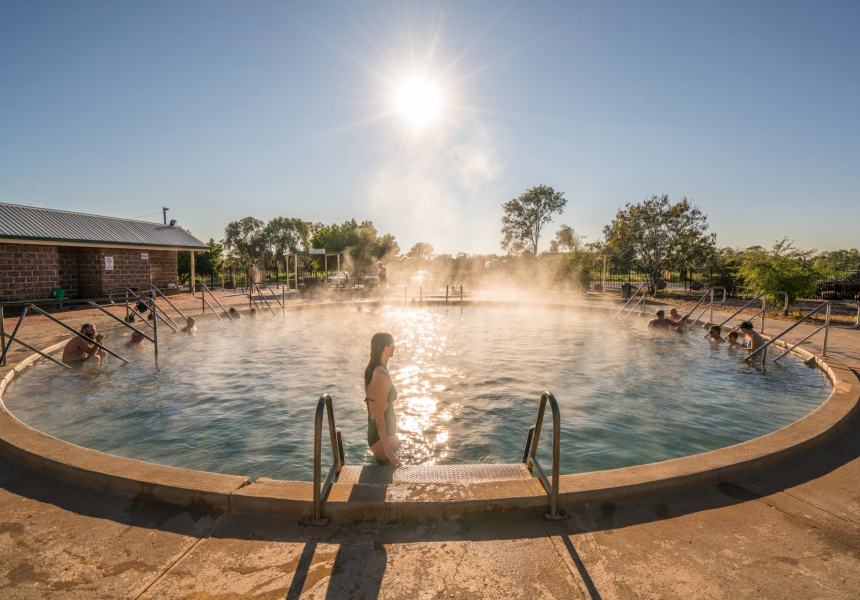 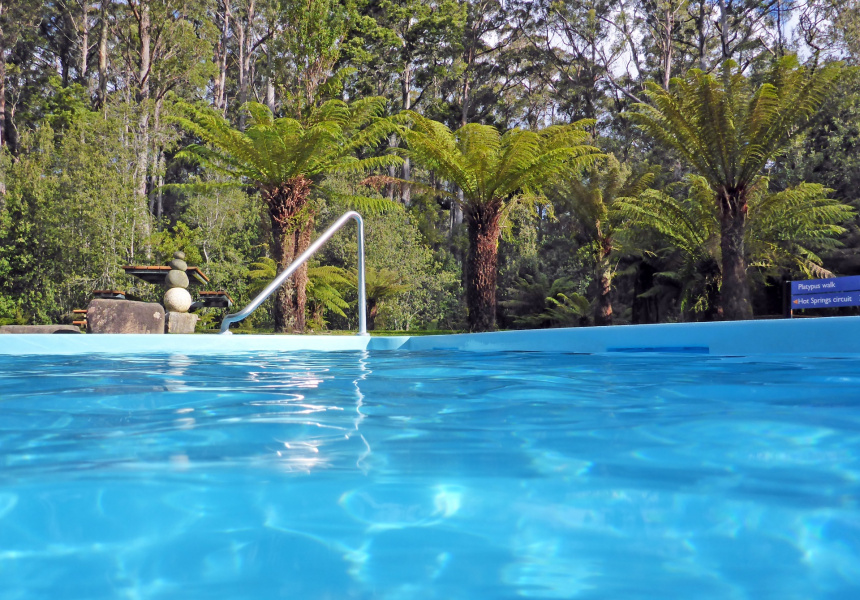 For thousands of years, humans in need of healing and restoration have been flocking to hot springs. In ancient Rome, aqueducts channelled geothermal waters into spectacular public pools, where hundreds of people would gather. In late 19th-century France, the aristocracy and bourgeoisie would spend weekends lazing around grand villas in spa towns. Now, in 21st-century Australia, we bring you dreamy hot springs in every state – from a pool carved into ancient limestone in Tasmania’s Huon Valley to a wonderland of baths on Victoria’s Mornington Peninsula, and a pint-sized pool by a waterfall in WA’s Kimberley region.

Hastings Caves and Thermal Springs, Tasmania
Ninety minutes south of Hobart, in the lush Huon Valley, you’ll find the ancient formations of Hasting Caves and Thermal Springs. Begin your adventure with a wander through the limestone caves – there are 45-minute tours throughout the day – before diving into 28 degrees of thermal heaven. Entry is $5 for adults. The water travels the limestone, gathering all kinds of mineral treasures, before making it into the roomy pool. It’s worth saving time for the hot springs forest walk nearby. And, in case that works up an appetite, there are public barbeques nearby, as well as a cafe.

Mornington Peninsula Hot Springs, Victoria
Probably the most magnificent of Australia’s natural baths, established by brothers Charles and Richard Davidson in the late 1990s following a trip to Japan, Peninsula Hot Springs is powered by geothermal springs that bubble up from more than 600 metres beneath the earth. It has a plethora of pools, baths and wellness experiences. Take an outdoor Nepalese massaging shower, dip into a Turkish hamam, sit on a bubble spa couch, spend a minute (or maybe a second) in an ice cave, stroll along a reflexology path, and a rest in a hilltop pool surrounded by panoramic views of Mornington Peninsula. Between 11pm and 5am, you can also bathe by moonlight. Up the ante with a decadent spa treatment or a meal in the Spa Dreaming Centre. And if a day isn’t long enough, try glamping from $650 a night.

Lightning Ridge Bore Baths, New South Wales
When you plunge into a bore bath at Lightning Ridge, you sink into two million years of liquid history. That’s right, the water is that old, which means it’s had plenty of time to soak up nutrient-rich minerals, as well as warm up – the temperature generally hovers between 40 and 50 degrees. Its source is Australia’s Great Artesian Basin, which, at 1.7-million square kilometres, is one of the biggest, deepest artesian basins on the planet. To explore more of it, take the Great Artesian Drive, which takes in seven hot springs across north-western New South Wales. The Lightning Ridge Bore Baths are open 24 hours a day, seven days a week, year round.

Dalhousie Hot Springs, South Australia
The most remote bath on this list is in South Australia’s Witjira National Park, on the edge of the Simpson Desert, 500 kilometres south of Alice Springs and 70 kilometres from the nearest shop. It’s largely untouched by development. More than 120 springs rise to the surface across 70 square kilometres, but the hero is undoubtedly the giant, swimmable, tree-encircled pool, which has a year-round temperature of about 37 degrees celsius. Other adventures include the two-hour, six-kilometre Kingfisher Springs walk, plus the ruins of the Dalhousie homestead, which dates back to the 1870s. You’ll also spot a lot of wildlife, including dingoes, goannas and red kangaroos. Given the springs’ remote location, be sure to check the Desert Parks Bulletin for safety alerts before setting off.

Talaroo Hot Springs, Queensland
Talaroo is the new (old) spring on the block. It’s been around for 65 million years or so, but its traditional owners, the Ewamian people, officially opened it to visitors in April 2022. Find it four-and-a-half hours’ drive west of Cairns on the Savannah Way, which continues for another 3700 kilometres to Broome. There’s one communal pool, beautifully landscaped into the surrounding forest, as well as four private pools, where for $30 you can relax in solitude for 30 minutes. Camp overnight to join a yarning circle around the firepit from 6pm and have breakfast in the Talaroo Cafe.

Molly Springs, Western Australia
This pint-sized pool is the tiniest entrant on this list, but it certainly makes a big splash. It’s very pretty, with a backdrop of rugged rock formations, cabbage tree palms and a waterfall. It’s an ideal place to settle in for several hours with a picnic. Don’t be surprised if you meet local goannas, birds and fish while you’re there. Molly Springs is in WA’s north-western Kimberley region, near the Northern Territory border. Keen to explore the area? There are loads of places to stay nearby, such as this pearl farm, a croc motel, or this four-star resort.