Ten beachfront villas you need a helicopter to reach, a lagoon-style pool you slip straight into from your room and jaunts to a private beach picnic. 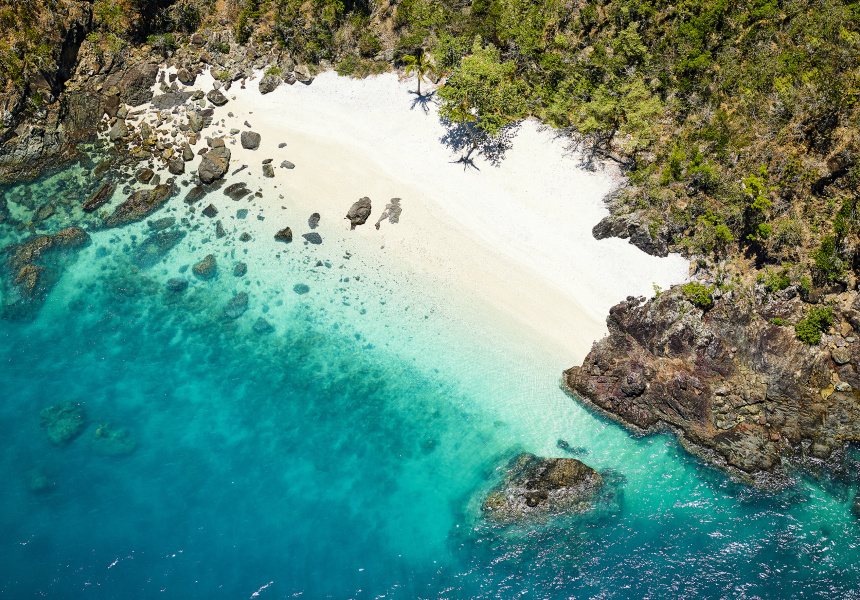 Mother Nature has not been kind to the Whitsundays over the past decade. Cyclone Debbie hit in 2017 and Cyclone Marcia just two years before that. In 2011 Tropical Cyclone Anthony swept through, as did Cyclone Yasi, which the Bureau of Meteorology described as “one of the most powerful cyclones to have affected Queensland since records commenced”.

There has been a lot of damage and devastation. But out of the debris have sprung four remarkable new resorts that celebrate tropical north Queensland with both design and activities. From Airlie Beach to Hayman Island they welcome visitors back to one of the most alluring pockets of the country. Here are the retreats you need to add to your bucket list, stat.

Elysian Retreat
Few resorts are as exclusive as Elysian: you arrive by helicopter, then check in to one of only 10 beautifully appointed beachfront villas. On a private cove enveloped by rainforest, this is the only accommodation – the only development – on the entire Long Island, which means the maximum number of other guests you’ll be sharing paradise with is 18.

A redux of the award-winning Paradise Bay Eco Resort – left closed for many years following Marcia and Debbie – Elysian’s villas ooze barefoot-luxe charm, from the Australian hardwood furnishings and floors to the light-capturing cathedral ceilings. Yet all the style doesn’t come at the expense of sustainability; the retreat is 100 per cent solar-powered.

Between swings in the hammock, make the most of the lagoon-style pool filled with stress-relieving magnesium water, glide by the sights on a paddleboard or in a glass-bottomed kayak, explore the Coral Sea on a guided snorkelling tour with a marine biologist, or retreat to the resort’s breezy restaurant, where produce comes from the on-site organic garden as well as nearby farms. elysianretreat.com.au

InterContinental Hayman Island Resort
Since switching management a number of times since millionaire Reg Ansett – the founder of now-defunct airline Ansett Australia – built it in the 1950s, Hayman Island resort’s newest incarnation is by the InterContinental Hotel Group. The most northerly of the Whitsunday Islands, Hayman’s $135-million makeover touched everything from the five restaurants and bars to the 166 rooms and suites, scattered across three wings in a crisp palette of ivory, beige and chocolate.

If money is no object, you’ll want to book the 400-square-metre Beach House overlooking the sand and featuring three suites, each with a private pool. For everyone else, there are two other places to swim, including the hotel’s signature lagoon-style pool you can slip straight into from some rooms.

The resort is alone on the 400-hectare island, with the Great Barrier Reef and some of the world’s best diving and snorkelling on its doorstop. You can jump in a chopper and head for a private picnic on the sparkling sand at Whitehaven Beach, via an overhead loop of Heart Reef – a picture-perfect composition of coral that has naturally formed into the shape of a heart. intercontinental.com

Daydream Island
Like Hayman and Elysian, the damage classic Aussie resort Daydream sustained after Cyclone Debbie was sizeable. The only structure on the kilometre-long island of the same name, a 30-minute ferry ride from Airlie Beach (on the mainland), Daydream was forced to shut and undergo a mammoth $100-million makeover, and recently re-opened looking sharper than ever.

One of the largest properties in the Whitsundays, with 277 rooms, this is probably the most family-friendly of the new crop of openings (there are kids clubs and babysitting facilities, and the Living Reef is perfect for young explorers).

Hike through the rainforest for views over the Great Barrier Reef, recline at the alfresco cinema, chopper over the islands, or explore the region’s marine diversity at the Living Reef. This enormous free-form coral lagoon, fed by ocean water, comes with an underwater observatory, designed to help visitors learn about their fragile surrounds while contributing to its conservation and restoration. Join marine biologists to learn about rays, cod, bream and butterfly fish, help plant coral, or just enjoy gliding through one of the world’s most incredible underwater ecosystems. daydreamisland.com

Freedom Shores, Airlie Beach
If you like the idea of staying on a boat but don’t have the budget to charter a mega-yacht to cruise the Coral Sea, you can bed down in one of Freedom Shores’ 10 bungalows designed to resemble fishing boats (right down to their ship-bearing names). It sounds kitsch, but it’s far from being like a theme park; the rooms come with a patio and locally made bathroom amenities, and nautical-themed artwork.

There’s a pool with views over Pioneer Bay, and day excursions include fishing and snorkelling. Volleyball nets are set up over the sand in the shade of tall palm trees, some from the set of Pirates of the Caribbean, which was shot nearby. And then you’ll find Shangri-La, one of the boats in General MacArthur’s fleet during WWII, now used to prop up a deck where you can enjoy sunset drinks at the bar.

This article first appeared on Broadsheet on August 20, 2019. Some details may have changed since publication.