There’s more than mineral waters to sip here. In partnership with American Express and its Shop Small program, here’s a snapshot of the region’s most exciting eating and drinking. 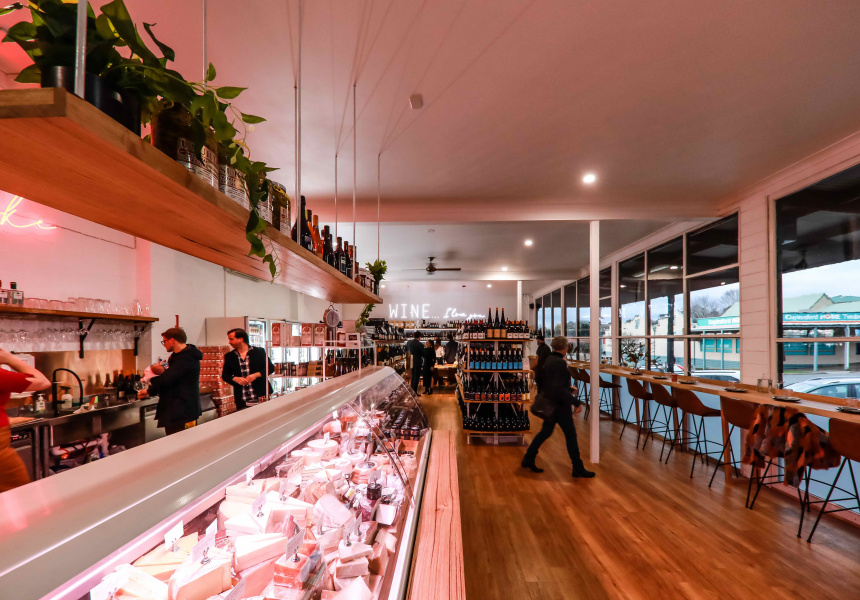 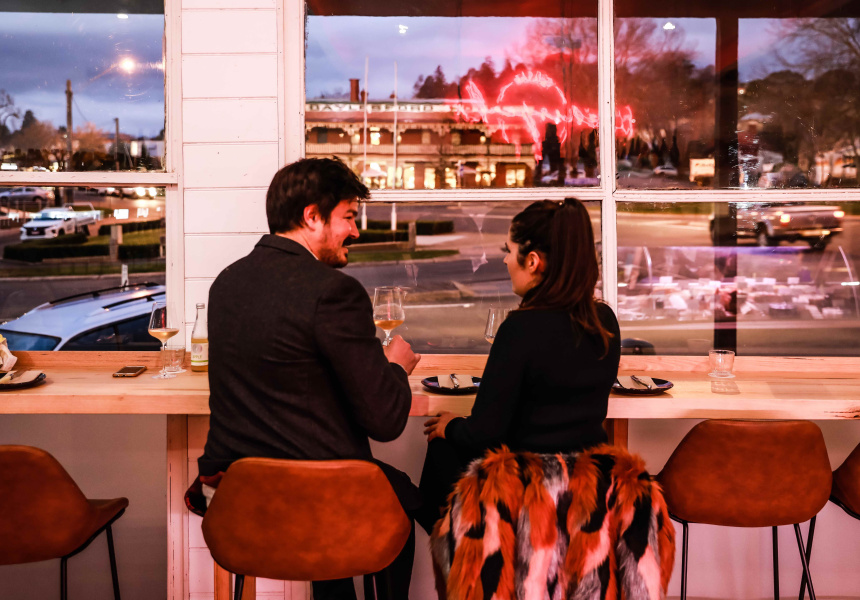 Daylesford and the Macedon Ranges is decidedly lush with farmers, growers, and makers — plus those who have (more than) a knack for transforming bountiful produce into exquisite things to eat and drink.

Here’s our pick of restaurants, cafes, bars, and breweries worth seeking out next time you’re planning a weekend jaunt.

Du Fermier, Trentham
Restaurateur-chef-baker-farmer, the inimitable Annie Smithers has dedicated a lifetime to translating the region’s red dirt and cool climes into meaningful paddock-to-plate cuisine. Her Trentham restaurant Du Fermier is a cosy space, and that’s not the only reason advance bookings are an absolute necessity. There’s a new menu each weekend, based on French farmhouse dishes and centring vegetables grown in her kitchen garden at nearby Lyonville. There, she raises cashmere goats, miniature white Galloway cattle to graze the pastures, rare breed Cheviot sheep and Sebastopol geese, as well as ducks and chickens. But the meat and poultry offering at her handsome regional resto has always leaned local. Here, you’re in for a four-course set menu with the option for matched wines from the carefully curated list.

Frank and Connie’s Kitchen, Hepburn Springs
Chef-owner Caliopi Buck named this homey restaurant after her Greek grandparents and their generous cooking influences. The menu changes weekly, sometimes daily, driven by the seasons and available produce. You can expect a few Greek dishes like housemade pita or saganaki with honey, but the remainder moseys with the whims of the chef — who spent four years dedicated to pastry and loves surprising guests with South American lamb ribs with chimichurri. To start, convince your fellow diners to share the Middle Eastern-spiced quail with hummus and pomegranate, as well as duck bao with pickled radish and cucumber. Larger plates might feature beef ragu with pan-fried ricotta gnocchi and charred broccolini. Dessert is always a must (those pastry stripes, remember). Think loukamathes (Greek donuts) or French-style crème chiboust with poached rhubarb and quince sorbet. Meanwhile, little brother cafe Harry’s peddles freshly baked cakes, coffee, and sourdough over on the next corner.

Midnight Starling, Kyneton
With its wood-panelled walls, Art Deco lighting, marble bar, and bentwood chairs, this handsome bistro will transport you straight to the (European) continent. The French bistro boasts its own kitchen garden and flower field in nearby Spring Hill, growing a lot of the fresh produce that lands on the menu. That means there’s always a veg option, like braised leeks with roasted parsnip and pickled shallots to start, followed by pastry-cloaked mushrooms. For everyone else, the bistro makes excellent use of game meats and uncommon cuts like wild hare, pheasant, or pig’s ear. This fits snugly with owner-chef Steve Rogers’ zero waste agenda — one rabbit might become rillette, ballottine, terrine, grilled livers, roasted rabbit leg, and rack of rabbit. Just add mustard and cornichons. Diners can opt for two or three courses à la carte, or a six-course chef’s selection with the option for matched local and French wines. To start, haggle with your dining party over who gets to devour the steak tartare, roasted quail, duck liver parfait, or pigeon. Then likely double up on the sought-after duck à l’orange or the fish with seasonal veg and champagne sauce. Wipe up the exquisite sauces with baguette. Chase the cheese course with crème caramel.

Mr Macedon, Macedon
For a pint-size cafe, Mr Macedon churns out an abundant breakfast-lunch offering. On the liquid front, start with an Allpress coffee before progressing to a glowy turmeric-tinted smoothie, matcha latte, or freshly squeezed juice. Vibrant, healthful, micro herb- and flower-topped eats dominate the menu, from the vegan housemade granola with coconut labneh to wild mushrooms and kale on sourdough. The vibe ramps up at lunch — think Southern-style chicken with slaw and fries or a hefty Mexican jackfruit burger with chipotle hummus. Wash down the latter with a Holgate Brewhouse beer, Harcourt cider, or a glass of red from local Granite Hills Winery. The cafe has a second outpost at Gisborne too.

Holgate Brewhouse, Woodend
One of Victoria’s oldest craft breweries, Holgate Brewhouse has always been a must-visit when in any kind of proximity to Woodend. With its leadlight windows and cosy beer garden, the 1897-built red-brick pub is a solid pit stop for beers and a top-notch pub meal. In late 2019, it got a swish new brewery and taproom — 20 years on from when Paul and Natasha Holgate founded the brewhouse. If tasting is your objective, you can beeline for here where 16 taps of limited and special release beers are ready to fill a tasting paddle. Back in the bar, you’ll find the IPA, lager, pale ale, and Hefe (a German-style wheat beer) all on tap, plus the popular Extra Special Bitter and an English Broon Ale on traditional handpump. To eat, the Cape Grim beef burger, ale-battered dory with thick-cut rosemary salted chips, and free-range chicken parma remain. Plus there’s chargrilled beer bread to start, and Thai red curry, lasagne, and falafel for the vegetarian-minded.

Winespeake, Daylesford
This cellar and deli is the second iteration of Jen and Owen Latta’s Wine & The Country. The former opened in 2013, offering a space for locals and travellers to source delicious minimal-intervention regional wines and those from further afield. Jen soon tacked on Dos Deli to add a food offering, and now the team has shuffled a little along Vincent Street to a larger, and cumulative, space. Amid 700 bottles, track down lo-fi unicorns like small-scale Jura vigneron Valentin Morel’s Les Pieds Sur Terre label and compare it with Latta’s own Jurassique Chardonnay. Natural and notorious Radikon sits aside drops from Peter Lauer in the Mosel region of Germany that trill with finesse. When it’s good wine-drinking weather, there’s oft up to 20 wines available by the glass. Alternatively, grab a bottle off the shelf to imbibe on-site or takeaway. Snacks take the shape of local and European cheeses, charcuterie, and accompaniments. 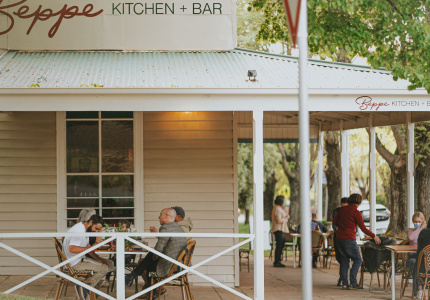 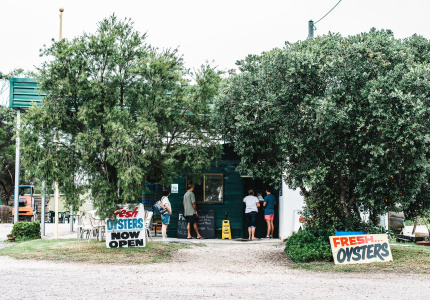 A Weekend Road Trip from Wollongong to Ulladulla