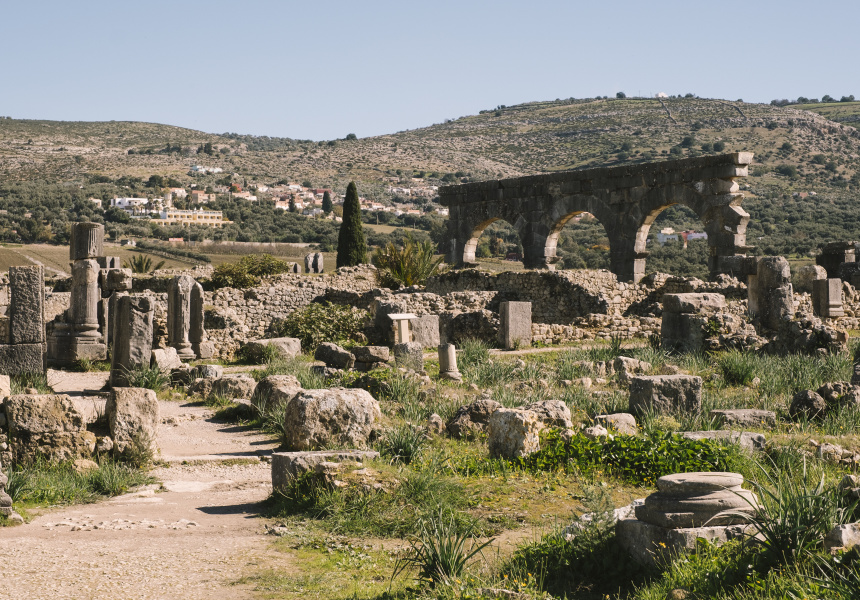 “This here is a sun bath, a solarium. You sit in the arches and water comes through the channels, like a jacuzzi.”

That’s Rachid Draou speaking, he’s an expert in Roman ruins and our local guide for the day. We’re looking at the House of Orpheus, an 1800-year-old Roman tanning salon with an inexplicably pristine floor mosaic. All the images are clear with only a few chips between them, and, more unbelievably, they’re colourful. We can see images of elephants, olive trees, deer and patterns so brightly coloured they could have been constructed last year.

“The animals were used for games in the colosseums,” he says. “Over here, that was an aquarium. They had fish just to look at, not for food.”

This is just the first building. Over there’s a temple to Jupiter – they sacrificed animals there. And that’s the forum where Romans debated politics and voted. There’s the ancient mill they used to make olive oil – there’s 60 more of those scattered around the hills. The pristine mosaic? There’s a lot more laid out in those ancient homes there. Over on that street, that’s where the slaves lived. Oh, that enormous arch? That’s just the entrance to the town. That’s an ancient Roman brothel over there – and that, well that’s where they crapped.

“They would all sit together and talk business, politics,” Draou says. “When it was cold, they made the slaves sit to warm it up; they were toilet seat warmers.”

This is the ancient town of Volubilis, former capital of the Kingdom of Mauretania and important Roman trading post. Now it’s one of the best-preserved ruins of the Roman Empire. But this isn’t in Rome, it’s not in Italy or even anywhere around it. This is in Morocco.

You can tell too. Not by the ruins themselves (they could easily be mistaken for famous sites elsewhere) but by the amount of people here. If this were in Rome, Pompeii or Athens, it would be teeming with travellers from all the continents of the world. You’d barely be able walk down the cobbled boulevard or peek into an ancient solarium without navigating bulging tour crowds, queueing and being hassled by cheap souvenir-spruiking hawkers.

But it’s not in any of those places – it’s in Morocco, a travel destination that for some reason hasn’t managed to sell the story of its history to the outside world.

The short version is that Morocco is a country with a long history of being invaded, taken over and ruled by many different forces. Its lands have been ruled by the Carthage, the Romans, Arabs, various Berber groups and the French, and each have left their mark on the culture, the people and the buildings.

You’d need an entire textbook for the long version, and that’s going to be a hell of a lot less engaging than seeing, tasting and hearing the history with a group of other enthusiastic travellers on the Moroccan streets – particularly if you’re in the company of Lahcen Taallate and his team of local guides. Taallate is our G Adventures guide, or CEO (chief experience officer) as G Adventures likes to say. He’s the one who shuffles us on the bus early in the morning, leads us to the most delicious edition of local speciality foods and answers all our questions. Through the course of the trip we learn about Moroccan martial law, the economy, feminist movements, local LGBTQI rights, the popularity of the monarchy, media ownership and more.

Another guide we meet later describes him as “behind the curtain”. While other guides just show you the beautiful “curtains of Morocco”, Taallate (a master of political science) tells it how it is. His telling of the Moroccan story is revealing, fascinating and occasionally shocking. For the culture and citizens of Morocco, Taallate has nothing but respect and love. The guides he works with, each employed to give their expertise on a different local area, carry the same philosophy.

Without all their knowledge and experience, a hidden entrance to an ancient university would simply be a beautiful door; the 7th-century quarter of the old city just an intimidating maze of dangerously narrow alleys; a royal palace would just be a beautiful sight without any knowledge of the fantastic and foul things that happened in years gone by.

None of this is more obvious than in Fes. It’s there we meet Mohammed Elaaraichi. He tells us that Fes, like many old Moroccan cities, is a mash-up of different cultures and the city can be roughly split up into three areas and architectural styles: the French-built new city, the Andalusian-influenced 14th-century medina, and the original walled city that was built in the 800s.

Elaaraichi explains this as we drive through the new city, where we’re staying. While there is a certain charm to it – the long, wide streets (one lined with palm trees is locally nicknamed the Champs-Élysées), the extra greenery and the early 20th-century Franco architecture – it’s still a city. Like many others in the world it has McDonald’s, sushi stores and Zara outlets.

But, then you turn a corner and it’s entirely and instantly different. The white walls of modernity give way to the terracotta tones, ornate doors and paved streets of the 14th-century city, Fes-el-Djedid. When we say ornate doors, we’re not talking about the occasional wooden carving or an opulent door handle here or there.

Morocco has probably the best collection of doors on earth; when they make a good door they go all out. They’re not all like this of course. The Jewish quarter and the Fes-el-Djedid are instantly humbler but no less fascinating. A Jewish quarter, or mellah if you’re local, is a space where Jewish people can live and do business. They were created we’re told, for two reasons – to keep the Jewish population separate but also to protect them and the business they provided the local economy. The mellah in Fes was the first, of its kind.

It doesn’t operate like this now. Most of the 25,000 Fes Jews fled to Israel when the country was established post World War II. The few that remain have moved into the modern part of the city. Their only legacy is the architecture (the open balconies and window peppered blocks are at odds with the rest of the old city), the old restored but empty synagogues, and the marketplace – a hodgepodge of sparsely arranged artisans, food stalls and a few oddly placed professionals (we see a few worn signs for dentists on one strip).

We then travel to Fes’s oldest quarter, the UNESCO-listed Fes-el-Bali. If there is one place in the world where you’d want a guide, it’s here in an ancient city that’s barely changed since the 800s. It is as you’ve heard, a gargantuan maze. It may be functional, with more than 156,000 people living there and seemingly even more using the streets to haggle and promote all manner of both cheap and unique handcrafted goods, but it’s not logical.

Streets, some as thin as a malnourished garden-hedge, can lead anywhere – to open markets filled with active blacksmiths, to dead-end dark alleys manned only by street cats, to food markets plump with the aroma of spices, grilled meats and baking, to ancient UNESCO sites beautifully restored and full of history. Finding any of that alone would be nigh impossible – how would I even know any of it existed? This is Elaaraichi’s town. He knows how to navigate the 9000 nameless streets and he knows which ones offer grilled flatbreads and jam, and which house the few mosques and mausoleums open to the public.

With the agility of a ballet dancer who’s spent a lifetime practicing in a china store, he guides us through the crammed alleys. After passing an aisle aromatic from the craft of ancient perfume production, we’re led through a giant wooden door and into Medersa al-Attarine, an Islamic school built during the 14th century.

It’s stupefyingly beautiful. Every inch is detailed with mosaics, intricate stuccowork and ornamental Islamic calligraphy. Almost all of the time we’re there, exploring the old students’ quarters upstairs and hearing Elaaraichi’s tales of ancient Morocco, we are the only people there.

Just around the corner, Elaaraichi proudly shows off Al-Karaouine, the oldest university in the world (founded in 859 by the daughter of a rich merchant). Down another nondescript and shady street, we see the entrance to a sparkling mosque and a great shrine. As our guide explains its history, we watch elaborately robed Senegalese and Malian families complete their local pilgrimage.

The best experience lies behind an unassuming door (remember a standard Moroccan door would be verging on ostentatious in Australia) deep in the oldest part of town. It leads to a staircase and a leather shop that’s packed, wall-to-wall with pointed sandals, leather jackets and bags – nothing unusual or extraordinary, until a man greets us and starts handing out mint leaves. Hold it to your nose and follow me, he says.

Up another flight of stairs and over a balcony’s edge, then we see something remarkable, a truly ancient and almost dead art – traditional tannery. We see hundreds of multicoloured pools, laid out to look like a sample make-up tray. In many of them, men work knee-deep in pigeon-shit reeking liquid (that’s why the mint, the pigeon turds contain ammonia, a useful softening agent) drenching cow hides. Eventually they’ll turn into world-class leather jackets and bags. The stench we’ve been warned about is nothing, because this is a sight and an experience you won’t see anywhere else.