Parts of the World Heritage listed Southwest National Park are so wild the best way to explore them is by water. This multi-day trip will take you to remote islands, one of them a base camp where you’ll sleep in a canvas yurt and dine on Tassie produce every night. 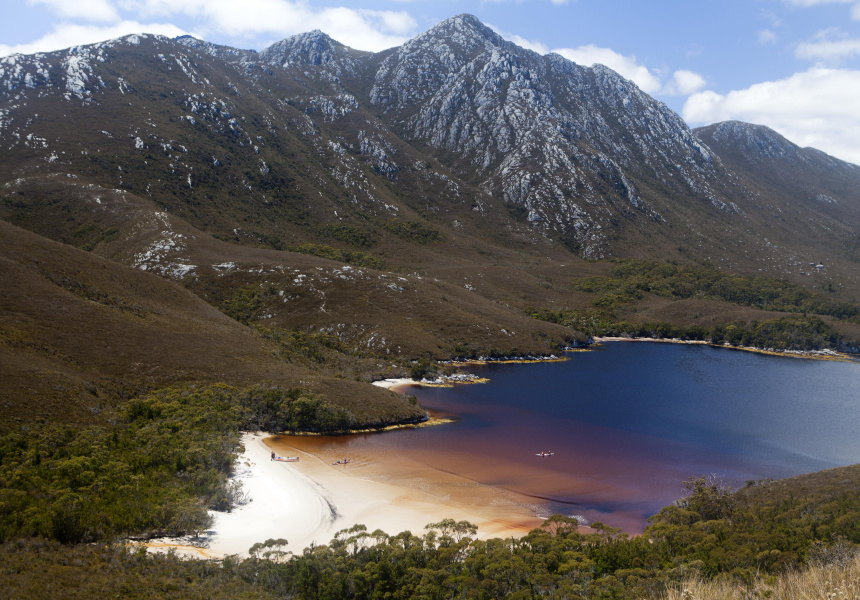 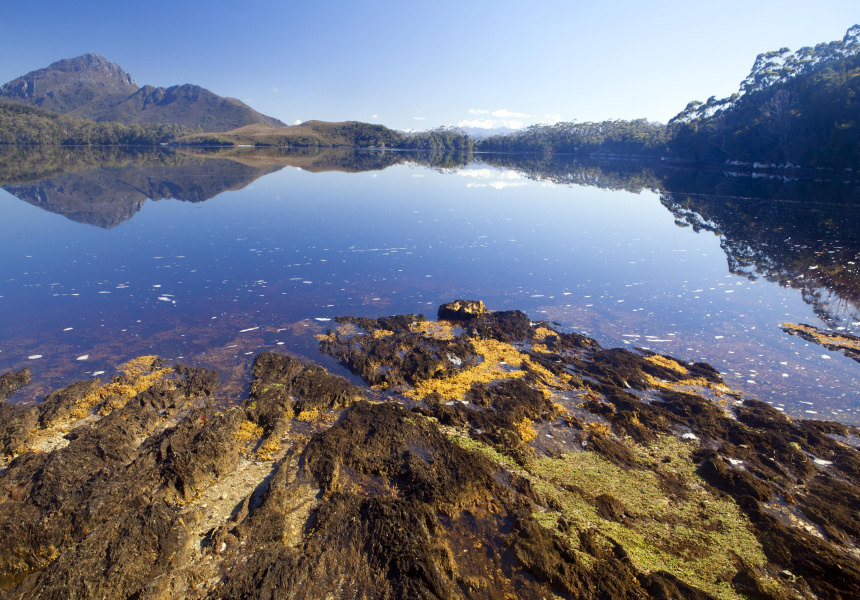 Tasmania’s Southwest National Park is like nowhere else in Australia. Comprising thousands of hectares of pristine eucalyptus forest, coastal and inland scrub, moorland and jagged mountain ranges, this wild and remote pocket is one of the world’s most unspoiled.

It’s renowned for its harsh climate, with an average of 250 days of rain per year, often coupled with cyclonic winds. It has a unique marine environment, with no recorded introduced fish species, and is home to the critically endangered orange-bellied parrot.

Parts of the park are accessible by road (it’s about three hours’ drive from Hobart) but arguably the best way to explore this World Heritage-listed site is to hike it or, better yet, kayak through it.

Named after the strong westerly winds that blast the region, Roaring 40s Kayaking operates four- and seven-day sea kayaking tours between November and April. It’s owned by kayaking instructor and guide of 14 years Reg Grundy and his wife Jenny Grundy, who has worked in vegetation management for Queensland's Department of Environment and Resource Management. The pair took over the company in 2013 to share their love of kayaking around Bathurst Harbour and the stunning coastline along Port Davey Marine Reserve.

“Paddling quietly allows you to engage more with your environment and to see and interact with nature in a really unique way,” Jenny says. “It allows you to reach locations that you couldn’t otherwise and see them from a totally different perspective. There’s also a real sense of achievement that comes from knowing how hard you worked.”

You’ll meet Jenny and Reg along with the rest of your group at Cambridge Airport in Hobart. After some repacking of your things into waterproof bags (a sleeping bag, all food and paddling outerwear is provided but you’ll need basic toiletries, thermals and other warm protective gear, plus dry clothes for camp), you’ll fly the 45 minutes with Par Avion to the tiny Melaleuca airstrip where the tours begin.

Every tour is different depending on the weather, the routes or activities the guides suggest, and what the group as a whole agrees on. We take a three-day tour (these tours have now been extended to four days), and after packing our stuff into our tandem kayak (“divorce boats” one of our guides, Tory Stewart, jokes), we slip off the pontoon into the Melaleuca Inlet, keenly aware there’s nothing between us and the water but air and fibreglass, and paddle the six kilometres through Forest Lagoon to the camp where we’ll be based.

The Forest Lagoon Wilderness Camp was originally built for cray fishers, but today it’s made up of five canvas yurts, a communal mess tent for breakfast and dinner (lunch is usually a wrap eaten on one of the islands we land on during the day), and a toilet with a pump flush, all connected by a wooden walkway. It’s not quite glamping but it’s still very comfortable; each yurt is decked out with a proper double bed and extra blankets, and space to hang any wet paddling gear outside.

We get to camp, unpack our things and have a cup of tea, then paddle the short distance across to Claytons Corner (a cottage locals Win and Clyde Clayton lived in during the ’60s and ’70s, preserved by the parks department for use by hikers and explorers for shelter and fresh water) and embark on the three-hour Mt Beattie Track hike. A moderate level of fitness is recommended to make the most out of the tour, though no kayaking experience is necessary.

We’re caked in mud by the time we reach the top and my hair’s been whipped into a bird’s nest by the wind, but it’s so worth it to watch the sun set over the wilderness from on high. Then it’s back to camp for a very welcome dinner of grilled Tasmanian salmon and mashed potato. And an early bedtime.

On day two, after a quick breakfast of muesli and pancakes, we paddle over 20 kilometres from our camp, hugging the western side of Bathurst Harbour and up through the North River. It rains briefly in the morning, then a thick fog descends. With the shadow of Mt Rugby looming in the background, and the feathered tips of the centuries-old celery top pines (named for their celery-like leaves) on the nearby islands just visible through the mist, it’s like a scene from Jurassic Park. The only sound is the gentle slap of our paddles moving through the coffee-coloured water, and the occasional bird call.

The staggering magnificence of the region reveals itself fully on day three. Sunshine transforms the water’s surface into a mirror, reflecting the bony mountains and white quartzite sands that ring the shoreline so sharply that it’s difficult to tell which half is reflection and which is reality.

Today we set a more leisurely pace and spend time floating around Celery Top Islands. There are five all up, and we land on the second – the only one where human visitors are allowed. After a scroggin break and a leg stretch we take a moment to imprint the south-west’s raw and rugged splendour onto our retinas. Then it’s time to head back to Melaleuca, wash out our kayaks, and meet the pilots before flying back to Hobart and home towards a hot shower.

This article first appeared on Broadsheet on October 1, 2019. Some details and prices may have changed since publication.