On a rugged hilltop about 90 minutes from Melbourne, you’ll find one of Victoria’s most stunning hotels. Lon Retreat is uncomplicated in just the right way. The 200-acre rural Point Lonsdale estate has been in owner Claire Gemes’s family for almost 150 years – her children are the seventh generation to live on the farm. But what was once the Gemes family home is almost unrecognisable. In its place: a sprawling sandstone homestead housing seven beautiful and spacious guestrooms, a mineral pool and day spa.

Gemes, who runs the resort with her husband Rob, worked on the overhaul for almost two years. Rob’s architect father designed the space, and Gemes worked with Pip Interiors of Barwon Heads on the fit-out. Every inch of the space feels wonderfully comfortable and lived-in.

“Everything is designed to allow you to have the time and space to soak it in, take a breath,” Gemes says. “When you come here, we figure you’re looking for space and calm. When you leave, we want you to feel as though you’ve connected again with yourself, your partner, with nature. We want to provide people with space and time.”

Gemes is friendly and down-to-earth, creating an air of informal luxury that carries through to laid-back and unpretentious service throughout the retreat. She’s an ardent supporter of local makers, too.

“We’re on a first-name basis with all our suppliers, as we love their stories,” Gemes says. “We want to know that everything has been made with love and care. It’s really special to have that.”

In one suite, a light installation is made from ostrich eggs from a farm in Winchelsea on the Barwon River, about an hour inland from Point Lonsdale. Furniture is by Byron Bay’s Pop and Scott, Relm in nearby Moolap and Melbourne-based Mark Tuckey. Wallpaper is courtesy of Willie Weston and is based on works by Indigenous artists.

One notable artwork is by Geelong-based, Perth-born artist Emma Itzstein, another by Hannah Nolan, a painter from Black Rock, south of Melbourne. Both reflect the surrounding landscape, connecting the rugged, wind-whipped scenery with the serenity of the indoor space.

No two of the seven opulent rooms are the same, though all have spectacular views of the bush, ocean and surrounding farmland.

“We’ve made sure to leave space around the property,” Gemes says. “Everywhere you go now everything is so built up. Looking out and just seeing space, it’s so nice.”

Each room is named after a cloud formation – Alto, Cirrus, Stratus – tying back to the idea of watching the weather roll in. Some rooms have private courtyard gardens, others balconies. Some cathedral ceilings, others open fireplaces. All are decked out in earthy tones of charcoal, emerald, ivory and grey, with natural stone and timber finishes. Bedside bouquets – proteas, waratahs, banksias – are from an on-site native flora plantation, managed by Gemes’s mother and sister.

In the in-room honesty bar you’ll find Leura Park Estate wines, Teddy and the Fox gin from Bellarine Distillery, Flying Brick cider, and snacks from nearby Annie’s Kitchen and The Food Purveyor. Ocean Grounds coffee from Torquay (a bit further along the coast) and Love Tea from Geelong are included in the room rate, as is breakfast for the first morning, which might include yoghurt with granola, coconut and pear chia pudding, and banana bread with cultured butter (from Geelong’s Lard Ass).

Guests are encouraged to meander to the day spa in Kip and Co robes, where you can choose from a very succinct treatment list.

“Beautiful simplicity is the basis of everything we do,” says Gemes. “It’s all about not bombarding you with a whole lot of choice. Rather, it’s about having a few simple things that are incredibly high quality.”

Treatments include facials, massages, body wraps and scrubs, starting at $165 and maxing out at $440 per person for an indulgent three-hour couples package. Hotel guests have unlimited access to the heated indoor mineral pool (water is from springs that run under the farm) at no additional cost, but day guests will need to fork out an additional $35 for a 30-minute soak. Skincare is by aromatherapy company Subtle Energies, which also features in generous in-room amenity packs. There’s an in-room spa bar, too, if you’d rather lock yourself away and DIY.

“Take off your watch. Switch off your phone. Do as much as you like, do as little as you like,” says Gemes. “There’s beauty in the art of doing nothing.”

Outdoors, there’s private access to the wild and woolly Point Lonsdale beach, and a farm track that’ll take you past sand dunes and paddocks until you reach Lake Victoria, sometimes home to the very small, very endangered orange-bellied parrot (it’s estimated there are just 14 left in the wild). There’s also a farm garden.

“This property used to be run as an orchard many, many decades ago, so we have all these heirloom veggies,” Gemes says. “We have over 100-year-old artichokes and garlic, things that you just don’t see anymore. We’ve got strawberries for days, pumpkin, squash, kale and stinging nettles that guests can buy to take home. In the longer term we’re looking at feeding that into a restaurant.”

At the moment, there’s no on-site eatery or kitchen, so guests will need to venture to nearby Queenscliff to dine, or Gemes will order in for you.

A little further out, in Mannerim, is eatery Merne at Lighthouse. Set among olive and gum trees, in a former life it was the acclaimed fine diner Loam, though it’s now very different. The kitchen is headed up by Josh Smith, (Royal Mail Hotel, Tulip, Maze) serving four or eight contemporary Australian courses in a relaxed setting. It’s about a 15-minute drive away.

And of course, there’s Aaron Turner’s acclaimed and inventive degustation-only Geelong diner Igni. Though it might be too much of a hike for dinner (it’s about 30 minutes in the car), it makes for a spectacular long lunch on the way back to Melbourne.

Rooms start at $360 per night, twin share, and include unlimited access to the mineral pool, and a breakfast hamper.

This article first appeared on Broadsheet on September 24, 2018. Some details may have changed since publication. 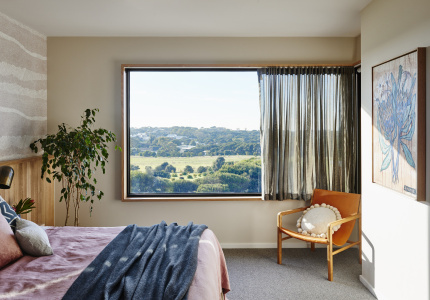