The southern NSW coast is a natural wonderland loaded with stunning beaches, national parks and tranquil towns. In partnership with Tourism Australia, we take the coast road and pick some of the best places to stop off along the way. 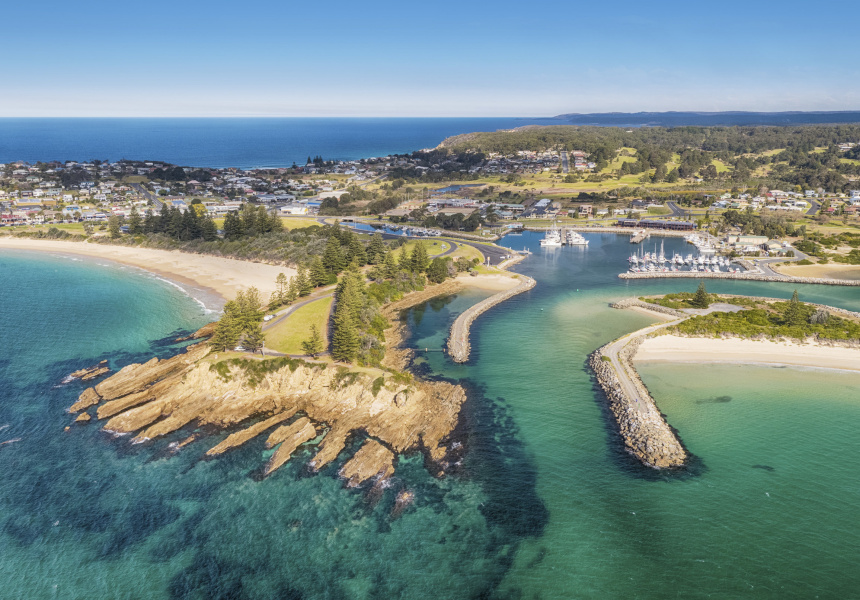 As soon as that shimmering blue ocean appears over the horizon on the southern NSW coastline, you’ll know why they call it the Sapphire Coast.

A chain of postcard-pretty beaches broken only by estuaries, lagoons, rocky headlands and coastal campgrounds rustling with wildlife, the region begs for exploration. But it’s not just natural wonders that beckon; seaside towns serve up fresh seafood, delicious gelati, craft beer and coffee to rival your favourite inner-city haunt. There’s even a rollercoaster.

Here are our favourite stops on a road trip through the Sapphire Coast.

Bermagui
The Sapphire Coast’s northern-most town epitomises the region’s appeal with its white-sand swimming beaches such as Horseshoe Bay, and surfer haunts like Camel Rock. There’s also the supremely photogenic ocean rockpool Blue Pool, and Bermagui Fishermen’s Wharf for the catch of the day. If you’re prone to sweets, head to Bermagui Gelati Clinic for absurdly good gelati made from a traditional Italian family recipe using fruit from local orchards. For something different, take a 2pm tour of Montreal Goldfield, Australia’s only coastal goldfield.

Mimosa Rocks National Park
This 20 kilometre stretch of coastline holds deep connection for the Yuin People. Learn about both the ancient and (relatively) recent history on the Mimosa Rocks walking track, which passes Indigenous middens and the wreck of the steamer Mimosa, which struck rocks here in 1863. Nelsons Lagoon also offers exceptional swimming, paddleboarding and birdwatching.

Stake out Bunga Head at sunrise to witness incredible colours spread across the crumbling castle-like rocks. A 1.5 kilometre walk from the Bunga Beach carpark takes you to the aptly named Hidden Valley, a secret beach with a deserted island feel. Meanwhile Gillards campground is classic bush camping right beside the beach (bookings required).

Tathra
Twenty minutes south of Mimosa Rocks lies Tathra and its heritage-listed wharf, a must see in this seaside village at the mouth of the Bega River.

For a unique view, grab a snorkel (or scuba dive if you’re really serious) and get among the marine wildlife that congregates round the barnacle-clad pillars. Non-swimmers may prefer the huge network of mountain biking trails, some of which were hit hard by last summer’s bushfires (but are still very rideable).

If all that activity is making you thirsty, the renovated Tathra Hotel gets the balance between classic country and contemporary foodie pub just right. (It also gets props for kicking out the poker machines and welcoming Humpback Brewery.

Merimbula
Pro surfers have given Merimbula Bar break a good reputation, but the swell can also be fickle in this part of the world. If you’re after a back-up plan that still gets the adrenaline pumping, head to Magic Mountain amusement park, where the Sapphire Speedster rollercoaster is the equivalent of dropping down the face of a left-hand break.

Further fun can be found back in town at Top Fun, the long-running entertainment lure that looks down Market Street. Take a round of laser tag, ten pin bowling, mini golf or revisit some old-school video games.

Pambula Beach is safe for swimming and has a holiday park tucked just behind. Expect to see kangaroos here in the evening, and if you feel the need to jog off your bakery excesses, the beach stretches all the way up to Merimbula (5 kilometres).

Eden
Wilderness meets the sea in the Sapphire Coast’s southern-most town, hemmed in by forested national parks on one side, and an expansive bay on the other. It’s a town with a long maritime history, which is told at the Killer Whale Museum through an artfully curated collection of artefacts and memorabilia.

The self-driven Killer Whale Trail takes you through Kiah River Inlet to the historic Davidson Whaling Station and on to the grand waterfront hotel Seahorse Inn, which dates from 1884 and is notable for being one of the Sapphire Coast’s first luxury boutique hotels. Use your phone to scan QR codes along the way for photos, videos and audio of the region’s history.

Explore the beaches of Ben Boyd National Park
Just south of Eden lies Ben Boyd National Park, where you can find intrepid camping spots at Saltwater Creek Campground. A secluded coastal hideaway with two creeks, lagoons and a wild beach, it’s great for fishing and dolphin spotting. And it’s an excellent, quiet, and stunning spot to finish (or begin) your tour of the Sapphire Coast.