The Restaurants Around Australia You Should Travel For

It's okay to base your holiday around dinner. 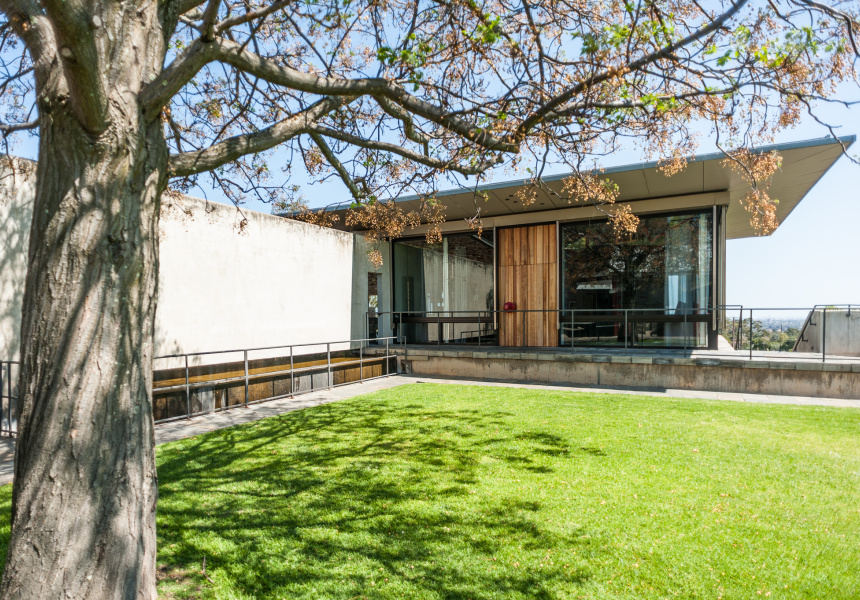 It’s not unusual to shape entire overseas trips around exploring the food of a foreign country. But increasingly it’s remote towns or unexpected cities nearer home that are catching our attention. Destination restaurants are rousing a new era of gastro-tourists, keen to base weekends away around a single, decadent dining experience. Here are six restaurants worth the effort.

When Dan Hunter, formerly head chef of Spain’s famed Mugaritz, was looking for a property to base the regional restaurant of his dreams on, he drew a 150-kilometre circle around Melbourne. The ideal spot eventually appeared two hours west of the city, in the Otway hinterland.

Hunter grows much of the restaurant’s organic produce in the restaurant’s fruit and vegetable gardens. He also sources from other sustainably minded farms in Victoria and beyond. The wine offerings match this intent, focusing on minimal-intervention drops from local growers. With a slew of awards under its belt, including No. 65 in The World’s 50 Best Restaurants for 2016 (up from 87 in 2015), Hunter decided diners might like to linger, and in February 2016, Brae opened on-site accommodation in the form of six luxury guest suites.

Set in an old Ford showroom, Franklin is luxuriously roomy in a way wine bars rarely are. Sharp lines of concrete, white brick, and copper detailing give the space a raw, industrial feel, softened by custom furniture, animal-hide rugs and lighting. Chef David Moyle (an Andrew McConnell alumnus) highlights the bold tastes of Tasmania with off-the-beaten-track seafood dishes such as urchin with nasturtium and leek; wood-roasted abalone with kelp and dried oyster sauce; and morwong with mustard oil. There are blond timber tables and well-spaced chairs, and the wine list is full of complex and juicy natural numbers. Let the team pick for you – it hits the nail every time.

With its first venue in Bronte, the Three Blue Ducks crew garnered a reputation for honest food made from local, environmentally responsible sources. Its second outpost is a 90-seat restaurant and produce store situated on The Farm at Ewingsdale – just 10 minutes from the beach.

Chefs Darren Robertson and Mark LaBrooy aim to use organic, chemical-free and grass-fed produce where possible, and ingredients are sourced from either the site’s 86 acres of productive farmland, or other local producers. .

Start your day with a farm bowl of roasted seasonal vegetables, a poached egg, housemade ferments and sprouted quinoa toast, and return for local line-caught fish, celeriac, fennel, pomelo and hazelnuts for dinner. There’s a bread-and-pastry corner known as The Bread Social, a flower shop and a produce store stocked with all sorts of interesting, locally made provisions. Allow time to visit the cows, pigs and chickens.

Conveniently set in the superbly designed Hotel Hotel, Monster is causing as much noise as the accommodation upstairs. The kitchen is run by Sean McConnell (brother to Andrew), who shapes local, seasonal produce into intriguing share plates. This means Palmer’s Island mulloway with confit leek, baby turnips, burnt butter, capers and nori, or perhaps fried pigs head with anchovy mayonnaise and fennel salad.

The kitchen is open from breakfast – think porridge with spiced quince, halva, pistachio and rose – and runs through to 1am. Set on the ground floor of the hotel, the restaurant also has a great bar and a magnificent fireplace.

This Japanese influence is seen in Huggins’ delicate plating and ingredient pairing, and his attention to seasonality. With his chef wife Emma McCaskill, Huggins has crafted a menu that supports the estate’s current vintages and preserved back catalogue, but also stands alone. Dishes such as tuna, egg yolk, anchovy and grains; partridge, jamon, “last year’s pickled peach”; and chocolate, fig and almond-milk ice-cream celebrate the region’s incredible produce.

The restaurant is open for lunch and dinner, with the option to match a tasting menu with either the sommelier’s choice, or the luxury edition of wines (a pricey pairing that delves into Penfolds’s iconic releases, making it one of Australia’s most expensive dinners). The contemporary interior of the restaurant offers a stark contrast to the heritage-listed buildings of the winery.

Australian-born David Thompson is one of the world’s best Thai chefs. Nahm, his restaurant in London, was the first Thai restaurant to gain a Michelin Star, and he recently returned home to open Long Chim in Perth. This latest restaurant, which opened in late 2015 in a CBD basement, sports rustic brick walls, corrugated-iron ceilings, copper-pipe detailing and colourful murals. It serves Thai street food in a fun, laid-back and loud environment.

It’s less refined than Nahm, but Thompson’s commitment to authenticity is still the driving force. The star dish is the Chiang Mai-style larp, for which finely chopped chicken is served in crisp cabbage-leaf cups with dried chilli and black and white pepper. The menu is designed to share, and features dishes such as dried prawns with ginger and toasted coconut in betel leaves, and a sour-orange curry of fish with flowering choy sum and tomatoes. There’s a Thai-inspired cocktail menu as well as a selection of craft beers and wine.

This article is presented in partnership with ANZ. The ANZ Rewards Travel Adventures card gives you a complimentary return domestic flight each year (until the card is cancelled), when you spend $500 on eligible purchases in the first three months.