A City Staycation Guide to Melbourne

A world’s top 50 best restaurant, a floating pontoon bar, concerts in the park and spaceship-style penthouses. In partnership with Tourism Australia, we highlight just how much you can pack into a long weekend in Melbourne. 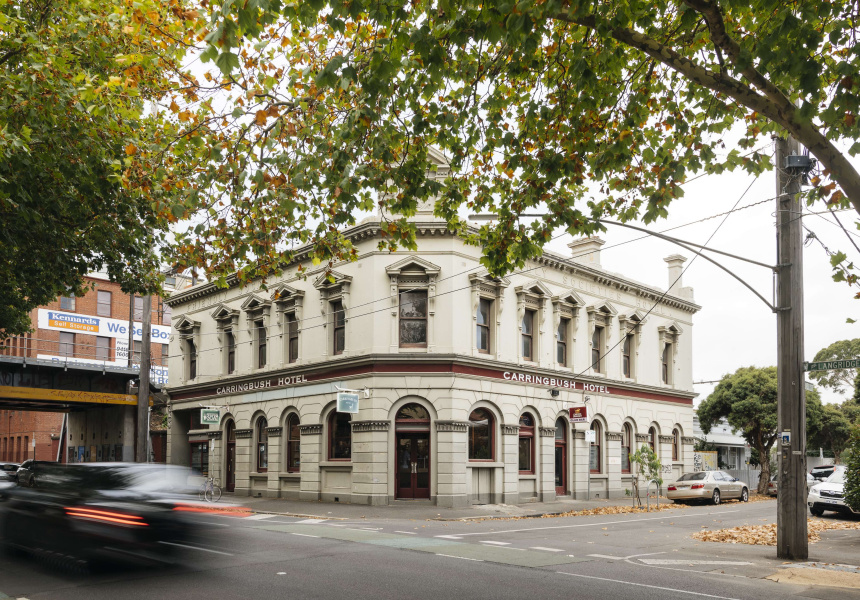 The Macquarie Dictionary’s 2020 word of the year is “doomscrolling”, but we reckon “staycation” was unlucky to miss the top billing. In a year where travel has constricted in ways we never thought possible, we’re scheming holidays not overseas but in our own backyards.

For years we’ve been spruiking the city of Melbourne to the world, often without fully appreciating it as a holiday destination for ourselves. That’s now changing. It’s the summer of the staycation, so there’s no better time to really get to know our cities. In partnership with Tourism Australia, we sketched out a guidebook to the best places to eat and drink, where to stay and what to do in Melbourne this summer.

The Carringbush Hotel
This grand old Abbotsford pub has been a Langridge Street fixture forever. But in recent years it’s changed ownership (it’s now run by the crew who brought you the Old Bar) and has been completely refurbished, in both design and concept.

It now boasts an all-vegetarian and vegan menu, as well as a sustainable, low waste, low environmental impact philosophy. That means all 22 beers are on tap (rather than bottled), as are eight wines (the list leans heavily on Noisy Ritual urban winery), there’s limited use of plastic and nearly all food is made in-house from locally sourced ingredients.

Local favourites include the homemade gnocchi, which comes with sweetcorn puree and a romesco sauce, and the Tex-Mex enchilada made from eggplant mushroom “mince”. There are also veggie takes on classic counter meals, including a veggie pie, deep-fried tofu burger and a highly recommended haloumi and mushroom burger. Time your visit for Taco Tuesday and choose from three new flavours weekly. The Carringbush Hotel is open from 11.30am every day, so you can also drop in for a Padre Coffee.

Attica
Attica needs little introduction. Since Ben Shewry took over the kitchen in 2005, this formerly unremarkable Ripponlea bistro has transformed into one of the city’s most innovative restaurants. Having featured several times on the World’s 50 Best Restaurants list, it’s unsurprising to learn Attica has a dedication to native ingredients that borders on obsession. This means honey ants (a traditional First Nations delicacy), saltwater croc ribs, bunya nuts, a range of native fish and mussels from a 13-course menu with a consistent philosophy but an ever-changing line-up.

The tasting menu is $320 per person and payable upon booking. Given there’s a limited capacity due to Covid-19 regulations, make sure to book well in advance.

Also making an appearance this holiday season is Attica’s “Summer Camp” pop-up restaurant in the Yarra Valley. It promises a very different menu and atmosphere, with a view over gum trees rather than vineyards.

Arbory Afloat
Occupying Flinders Street Station’s former platform 11, Arbory Bar & Eatery has become a much-loved fixture since it opened six years ago, sandwiched between the busy station and the Yarra.

Its sister ship is the ephemeral 69-metre-long floating pontoon called Arbory Afloat, which is tethered to the bar each year to signal the arrival of summer. This year’s theme is “Aussie beach house”, so expect lots of wicker, lime-washed timber decking, and the centrepiece swimming pool on the upper deck. Chef Nick Bennett takes charge of the menu, with Mediterranean-leaning dishes and nine different pizzas.

Arbory’s Four Pillars gin collaboration is back this year, craft beer is well stocked as always, and cocktails (there are six on tap) draw heavily on the beach theme. You’ll need to book before you board, and sea-faring types can also arrive by boat, docking at the pontoon.

Rooftop Bar
Seven flights above Swanston Street in the CBD lies this reliable stalwart of open-air festivities. It being Melbourne, the rooftop is a largely weather-dependant proposition, but a retractable roofing system has added some insurance against rain. On a balmy evening there’s no better place in town to enjoy a drink, looking out at the lights of the high-rise buildings and city streets below.

You’ll find a diverse selection of craft beer and summer cocktails here, including cocktail jugs of rosé and red sangria. Food is by Mr Yum and American-style burgers are king (including two veggie options). Orders are processed digitally via your smartphone using the QR code at your table, as per the new world order. Open from midday to 1am every day except Monday.

QT Melbourne
If you’re going to have a staycation this summer, you might as well do it in style. Boutique hotel chain QT has led the way in city-chic hotels around Australia, and this well-designed Melbourne incarnation blends seamlessly with its urbane setting.

The Russell Street location is pitch-perfect for all things CBD. It’s a stone’s throw from Chinatown, Flinders Lane and Fed Square attractions, but you can also afford to never leave the hotel. The European-style brasserie Pascale Bar & Grill occupies an entire floor, with a menu curated by executive chef Andy Harmer (ex-Vue de Monde and The Point Albert Park). There’s the grungy and herbaceous Secret Garden bar decorated with flowing foliage and specialising in all things gin, thanks to a partnership with Yarra Valley distillery Four Pillars – you might time your visit to catch a masterclass or tasting session. There’s also a rooftop bar offering a glittering cityscape vista (and it does great-value breakfasts).

As for the rooms, expect exceptionally comfortable beds, high ceilings, designer furnishings and industrial touches that are more New York loft than city hotel, and acute attention to detail. A Corner King Room comes with a standalone bath (how rare are baths in hotels these days?) and commanding views over Russell Street.

QT Club members get additional benefits, which ramp up the more nights you stay. Book four nights and you’ll get 25 per cent off, a $40 food and beverage credit, late checkout and a complimentary room upgrade.

Melbourne Spaceship Penthouse
If you’re after a private, truly unusual escape that showcases the city in a completely new way, this is the staycation for you.

Staying here feels like you’re hovering over the Yarra, or riding the bow of a ship as it slips into port. A daring architectural design provides this one-bedroom penthouse in the CBD’s south-west with a 270-degree panorama. In the foreground are the Rialto Towers, to the left is the MCG, to your right Docklands, and across the river at night Crown Casino lights up fireworks on the hour. It’s like having your own corporate box to a 24-hour CBD show.

The living area is more a sunroom, with windows that sweep back toward the roof on a rakish angle, which means sitting on the couch is more like sitting in the cockpit of the Millennium Falcon. Chances are you’ll never want to leave the balcony, though – an open-air tiled courtyard with a barbeque, an ordinary dining table and an extraordinary view.

There’s a study but there’s also no way you’ll get any work done because look at that view. There’s allocated car parking downstairs with a lift delivering you straight to your apartment, and an on-site gym.

Moonlight Cinema
The Royal Botanic Gardens will once again be the setting for the Moonlight Cinema when it makes a Covid-defying return to Melbourne this summer.

The outdoor cinema celebrates its 25th anniversary in 2021. Screenings will kick-off in January and as usual it’ll be BYO booze. There will also be Gold Grass ticket upgrades to score yourself a bean bed, exclusive lawn space and waiter service. Fancy.

The program isn’t quite complete, but so far you can expect a smorgasbord of classic drama and rom-com (Dirty Dancing, 10 Things I Hate About You), family films (Toy Story, The War With Grandpa), action (Unhinged), Australian features (The Dry, Penguin Bloom) and awful romantic pap (Love Actually).

But in many ways the movie is secondary – half the fun is getting together with friends and spreading the picnic rug out on the lush lawns of the botanic gardens, with a backdrop of trees and canopy of stars.

The newly refurbished Sidney Myer Music Bowl will host the three shows, and entry is free. Pack a picnic rug and bottle of wine and pray for good weather.

The Faun and the Firebird kick things off on January 29, featuring works by Debussy, Stravinsky and Australian composer Ross Edwards. Mambo! Dancing Across the Centuries takes place on February 6, with works by Rameau, de Fella, Bernstein and Australian composers Joe Chindamo and Paul Stanhope. The trio of concerts concludes on February 10 in swinging style with renditions of Duke Ellington (Dance With a Duke), Spanish flourishes courtesy of Ravel’s Piano Concerto in G Major, and a world premiere of Australian jazz composer Vanessa Perica’s Love Is a Temporary Madness.