Blacksmith Provedore Might Be Inspired by Memories of Childhood Summer Holidays, but There’s Nothing Retro About This Stunning Rural Restaurant 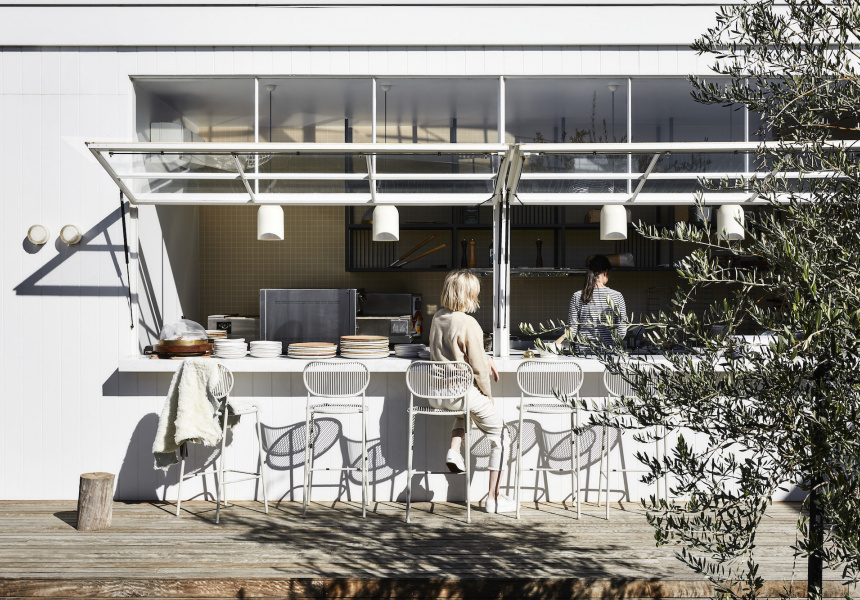 Liz Bayles reminisces about the summers she had growing up, visiting serene Lake Mulwala during the holidays from her family’s home in nearby Finley.

It’s those days that inspired her to open Blacksmith Provedore in Lake Mulwala, as a nod to the classic Australian holiday and to bring something fresh and new to the rural community.

The picturesque town of Mulwala sits on the New South Wales side of the border with Victoria, where the Murray River runs through the lake. It’s a three-hour drive from Melbourne and almost seven hours from Sydney.

After a morning of boating on the river or around the lake, dock nearby and walk across the lush green grass to Blacksmith’s sunny open pavilion. There are pink-tasseled sun umbrellas over lounge seats and outdoor dining tables, and ceiling fans keep you cool on hot days.

Step through the giant black arches and be greeted with the smell of pizzas baking in the kitchen’s woodfire oven. The interior is an elegant mix of tiles, stone and textures, and is warm and inviting.

"It’s definitely inspired by California and New York, but also Italy, Spain, Greece,” Bayles says. “When Hana [Hakim of Stella Collective] and I were designing it, she understood how much I love the tiles of Europe and the clean lines of LA.”

Those pizzas are made on a three-day slow-fermented dough that’s rolled to order. A tomato sauce, made with San Marzano tomatoes slow cooked for seven to eight hours, is used as the base for almost all them.

The hero here is the Blacksmith Pizza, which has thinly sliced San Daniele prosciutto and buffalo mozzarella from Victoria’s Shaw River over rocket and extra virgin olive oil. It’s Bayles’s take on a combination she enjoyed in Melbourne and Sydney but had trouble finding locally.

“I just wanted some freshly cut prosciutto on a pizza,” she says with a laugh.

Another favourite is the Paul Hogan pizza. It has chilli barbeque prawns, garlic butter, mozzarella, oregano, and a mix of dried and fresh chillies. The name is a play on the Crocodile Dundee actor’s ’84 tourism ad where he throws shrimp on the barbie.

A cheeseboard has a French soft, English hard or French blue cheese, served with crackers, quince paste and pickles. You can also add cured meat.

“We've really put in the effort to source fresh and local ingredients – or import if we need to, but as much as possible we stick to our local producers,” Bayles says.

Blacksmith champions local wineries. One of them is Scion Wines, a vineyard and winery in Victoria’s Rutherglen. Bayles says its rosé is one of the best she’s had. There’s another Rutherglen wine from All Saints Estate, which has been in the winemaking business since 1864. King Valley’s Pizzini Wines produces a prosecco just for the restaurant.

While the weather is cool the bar is making spicy Margaritas and the Balls to the Wall (cinnamon whisky, cloudy apple juice and fresh lime). In the spring and summer fresher and fruitier drinks come into play, such as a Mojito with passionfruit.  Blacksmith’s food and wine menu was developed by Bayles, but she had guidance from some Melbourne heavyweights. Close friend Sam Peasnell (Cheek, Dexter, Takeaway Pizza) helped brainstorm food ideas, and cousin Marty McCaig (South Press Wine House, Bar Margaux) gave tips on running a hospitality venture.

Though inspired by summer holidays, Blacksmith is a dining destination for the whole year. Bayles says when it’s cold you can eat pizzas in front of the fireplace and the space has a magical charm to it. “The look changes, and it just feels different somehow,” she says. “It changes with the season, with the mornings and evenings, with the weather and just with the light.”

This article first appeared on Broadsheet on September 5, 2019. Menu items may have changed since publication. 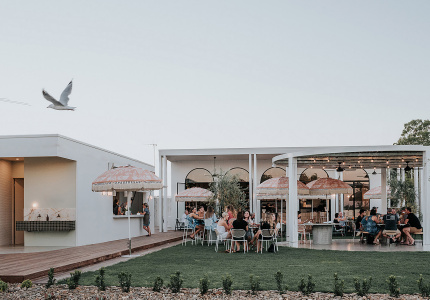