Start with breakfast in an old war-time Nissen hut, take a stroll through beautiful parklands, eat cutting-edge seafood in a riverside pagoda, follow it all up with some of the best shopping around, then end the night hopping between the city’s best cocktail bars. 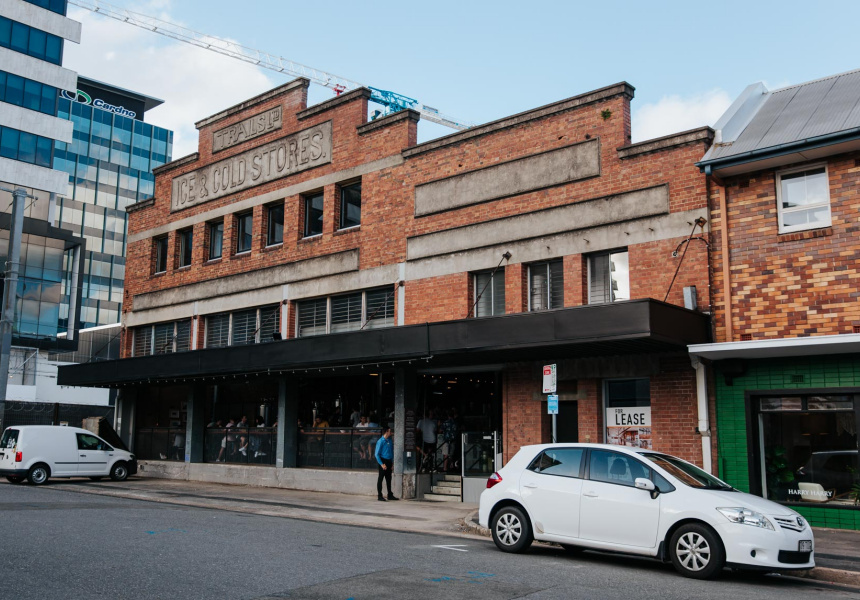 EAT HERE
Breakfast
Head to the eastern corner of Fortitude Valley and hit King Arthur Cafe. A super cute breakfast joint in an old war-era Nissen hut it may be, but there’s nothing quaint about the food here – order spicy Little Acre mushrooms with soy fried rice, or fried eggs with a potato and bacon hash and chilli greens, washing it all down with Sundays coffee.

A few blocks over is Kin + Co, another classy cafe this time housed in one of the historic wool store buildings along Macquarie Street. And if you’re floating around boho West End, head to Morning After for breakfast carbonara and a popular “secret” bacon-and-egg roll.

Still, don’t be afraid to travel to the burbs if you have an extra hour or two – there’s a heap of terrific cafes scattered across the bucolic hills north and south of the CBD. A favourite is Florence in Camp Hill – head to this beautiful eatery for brunch and follow it up with a peruse of the Camp Hill Antique Centre.

Coffee
The best coffee often depends on where you’re staying, of course, so consider this a super quick primer. If you’re in the Valley-New Farm area, hit Bellissimo for the best Italian dark roast in town or wander a few blocks north to Industry Beans for something more highfalutin. Those staying close to the CBD should aim for either Adam Wang’s Coffee Anthology – the yardstick by which all other specialty coffee in this city is judged – or John Mills Himself, a terrific little tiled grotto in a heritage-listed printshop. Just be aware that anything in the middle of the city will likely have limited hours on the weekend.

Towards West End, Blackstar is the local hero, but Streetlab’s Ethan Dou has also opened The Garner on the eastern edge of the suburb, flipping Therefore Roasters coffee and some very good Asian-fusion breakfasts. A little further out from the city, try Microlot in Hawthorne and the cherished Josie North in Toowong.

Lunch
It might be the star attraction at heaving nightspot Howard Smith Wharves, but the best time to hit Arc Dining is during the day, when it feels less a restaurant and more like a beautiful riverside garden pagoda. Former Saint Peter head chef Alanna Sapwell dishes up cutting-edge seafood, the grub backed by an enormous wine list from award-winning sommelier Iain Trinkle. If you want to keep it laid-back head to the city end of the precinct for Yoko Dining, Jonathan Barthelmess’s new Tokyo vinyl bar-inspired restaurant, or Stanley, where star chef Louis Tikaram has returned from Los Angeles’s phenomenally popular EP & LP to cook a Cantonese-inspired menu that heroes fresh local produce. Both are excellent.

Elsewhere around the city, Hellenika at The Calile is where you’ll find Brisbane’s beautiful people on a weekend (try to book a poolside cabana if you can) while for something very different, nab a seat on the balcony at Bar Alto in New Farm – in a city full of quality Italian restaurants, it’s the unsung hero.

Dinner
Deciding where to go for dinner in Brisbane in 2019 is an exquisite problem to have. Over the past 24 months this city’s restaurant scene has exploded – everything is new, and just about everything is very, very good.

A rite of passage for many a night out in Brisbane used to be fragrant Thai share plates and exceptional wines at Longtime. That restaurant is now a function space, but its spirit lives on at successor Same Same. Rendered by architects-of-the-moment Richards and Spence in great runs of concrete, white brick and vermiculate, it’s a stunning space to while away an hour or two.

To ratchet up the rambunctiousness, head two blocks over to Happy Boy. You could make a case for this being the city’s favourite restaurant, Brisbane’s hip crowd cramming in every night for modern takes on Chinese classics such as red-braised pork and shrimp omelette, accompanied by exceptional Australian small producer wines. If you want to take it in a more sedate direction, opt instead for Sydney star import Adam Wolfers’s plant-leaning Middle Eastern share plates at local icon Gerard’s Bistro.

Across the other side of town, Fish Lane is where to head after a show at QPAC or exhibition at QAGOMA. Julius is the late-night Italian superstar here – don’t worry about booking, they’ll just fit you in when they can for classy pasta, restrained mains and Neapolitan-style pizza. For something more wine-focused, head around the corner to Grey Street and find the burgundy stair case that leads to Maeve Wine, a beguiling bistro with small-producer wines and European-inspired share plates.

DRINK HERE
Afternoon
Brisbane’s bar scene had a nice little bounce at the end of 2018 and into 2019, as operators seemed to rediscover the market’s sweet spot after the introduction of ID scanners in mid-2017 (that’s a tip, right there: don’t leave your hotel without your ID, no matter how grey and regal you look).

In the afternoon, spend some time at one of the city’s many brewpubs. Stone & Wood and Felons get the press, but Brewdog’s Dogtap Murarrie taphouse provides a very different, very suburban take on the city’s craft beer scene. Still, while Green Beacon may have recently been bought by Asahi, for now it remains the Brisbane brewpub to beat – sitting beneath the venue’s open roller door on a summer afternoon, with the light reflecting off the brick warehouses opposite, is classic Brisbane.

For something more civilised, head to Hello Gorgeous, a brightly detailed bar with an enormous front deck, perfect for grazing on classy share plates of local seafood helped down by vermouth and Lillet-based cocktails.

Evening
The Valley is where you want to be if you’re keen to kick on. The rule of thumb here is, the closer you get to Brunswick Street the wilder things become. Gerard’s Bar is a good place to start. It’s set next to a James Street car park but don’t let that put you off – the cocktails are delicious, the service precise and the tunes terrific.

If you then want to get gnarly, walk up the hill to the excellent Savile Row or Finney Isles, both of which pour enormous spirit lists late into the night. Otherwise, make for the city to find Alba Bar and Deli, a brilliant rap-inspired pintxos and booze spot from former Masterchef contestant Jamie Fleming, and Super Whatnot, a longstanding laneway favourite that features a clever three-level design.

If you must insist on keeping it civilised, Maker in Fish Lane is the place to go. Your reward for wedging your way into this tiny joint is some of Brisbane’s best barkeeps and laid-back hangs with the post-theatre crowd.

DO THIS
You’re not doing Brisbane properly if you’re not checking out QAGOMA, which sprawls along the riverbank opposite the western side of the CBD. GOMA gets all the press – and it’s no different this summer with its blockbuster Water exhibition, which features Olafur Eliasson’s famous Riverbed (2014) and Cai Guo-Qiang’s brilliant Heritage (2013) waterhole installation – but always make time for QAG, which holds many of the older works from the galleries’ collections.

For something more nature-driven, organise a barbeque at New Farm Park, or picnic at Kangaroo Point Cliffs before taking a stroll towards South Bank. And if you have time, make the trip 10 minutes out of town to the Mt Coot-tha Botanic Gardens – this rambling, hillside parkland is organised around a bunch of different microclimates, meaning the scenery changes dramatically as you wander from one garden to the next.

Finally, if shopping’s more your thing, you have two options – visit the retailers in and around Queen Street Mall, including Double Double and Contra. Otherwise, make a day of it on James Street, which plays host to an enormous collection of classy boutiques and fashion outlets, including Aje, Assembly Label and Gail Sorronda – you’ll need at least a day to have a serious crack at all of them.