A 1970s Blue Mountains Motel Has Been Converted Into a Modern, Pastel-Hued Boutique Hotel

The Kyah’s 46 art deco-styled rooms bring a bit of luxe to the mountains. There are graceful archways, sweeping curves and bar and restaurant Blaq, which you don’t need to be a guest to visit. 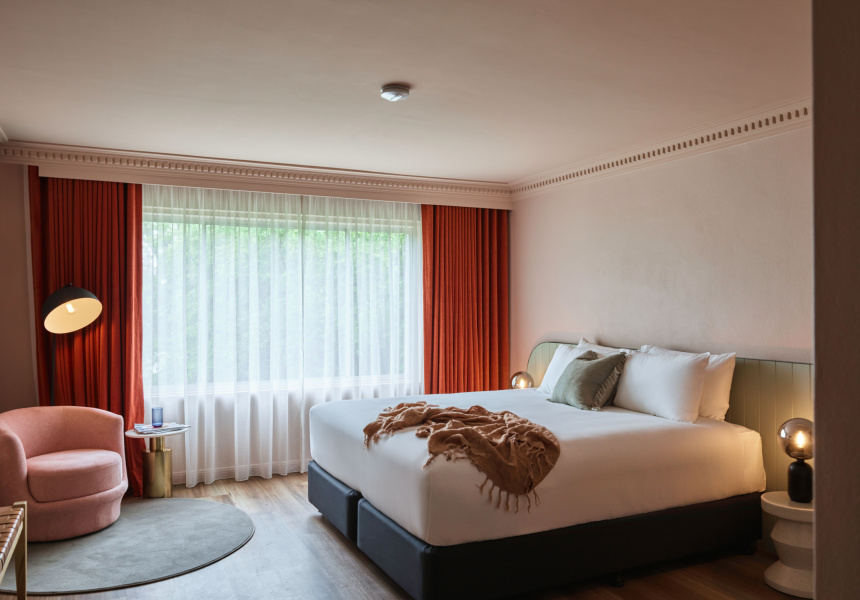 The newest reimagined motel to join that list is Kyah Boutique Hotel. Formerly the Redleaf Resort, it’s located near the highest point of the Blue Mountains in Blackheath and has been recast as a modern, pastel-hued retreat. The hotel’s original bones have been kept, but the interiors now feature graceful archways, sweeping curves, stylish art deco-inspired furnishings and calming, muted tones of blush, blue, earthy olive and rust.

Sydney-based design firm MKD Architects was behind the facelift, while the property is owned by family-run developer Novarum Group (which also owns and operates the Grand Hotel Kiama and Nova Kiama on NSW’s south coast).

Each of the 46 rooms is housed within one of the hotel’s three wings, which are named after the rocky columns – Meehni, Wimlah and Gunnedoo – in the Blue Mountains’ most famous landmark, the Three Sisters. The wings converge at a central lobby, where you’ll also find Blaq restaurant and bar. The two-acre property has a tennis court, a steam room, three fireplaces and a stunning 100-year-old cherry blossom tree you won’t be able to miss.

It’s a classic motel set-up, meaning each room – whether that’s a king suite (which sleeps up to three people), a two-bedroom suite or a family room – has itsown external entry, so there’s no need to go through the lobby.

The room’s minibar is stocked with a selection of locally produced snacks and drinks, including premixed Negronis by Karu Distillery, tinnies by Katoomba brewery Mountain Culture, and cookies from Whisk & Pin. The bathroom has handmade eucalyptus and lavender Castile hand soap by the Snowy Mountains Eucalyptus Oil Company.

You don’t need to be a guest to eat at the restaurant, Blaq. Named for its Blackheath location, it’s helmed by Mate Herceg, who has also worked at the mountain’s most famous hotel, the Hydro Majestic. His menu showcases hyperlocal ingredients sourced mainly from suppliers within an 80-kilometre radius of Kyah and supplemented by the hotel’s vegetable garden.

The bar is riding the indigenous-ingredient trend, with cocktails made with natives such as wattleseed, which appears in its version of an Espresso Martini, and lemon myrtle, in the Flamin’ Galah. Blaq opens daily for breakfast; dinner and drinks are available Wednesday to Sunday; and lunch is served on weekends only. 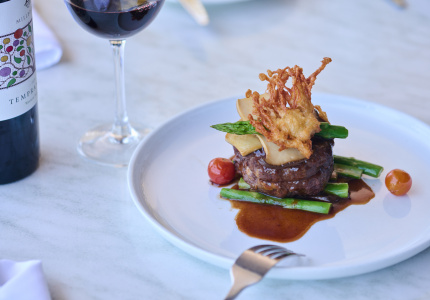