Halal Snack Pack? No, Adelaide’s Version is Called an "AB"

You don't want to know what it stands for. Really. 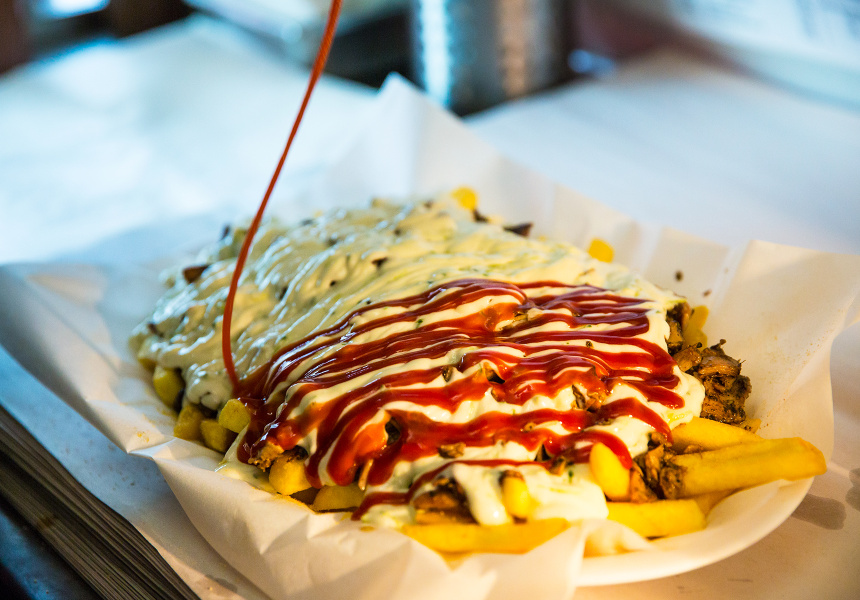 How do you create a cult food sensation? Take layers of hot chips, pile it with kebab meat, top it with garlic, chilli and barbeque sauce, and call it a Halal Snack Pack. Unless you live in Adelaide.

When the eastern states shout the praises of their beloved “HSP”, South Australians scratch their heads. According to locals, they’ve scoffed their own version since as far back as the ’60s. They call it an “AB”.

What does it stand for? We’ll get to that. First, there’s history to dissect.

“I only found out about Halal Snack Packs about a month ago,” says Yanni (John) Delvizis, owner of North Adelaide Burger Bar. “It blew my mind. I couldn’t believe it. I thought ‘this is an AB’.” When he spotted Facebook group the Halal Snack Pack Appreciation Society, his bemusement grew. “I thought, ‘damn, they’ve copied us’.”

The dish causes its own share of passionate commentary in Adelaide. Debate tends to focus on who made the AB first. The spotlight is on two North Adelaide burger joints; Adelaide Burger Bar (aka the Red and White) and the Blue and White Café. They are located a stone’s throw apart on O’Connell Street and the AB origin story differs depending on who you talk to.

“The Blue and White Café started in 1954,” says Tony Formato. “I’ve been here 32 years. That’s a lifetime. It’s pretty well established and a bit of an icon.” The cafe is a favourite with local college students, politicians, judges and everyday people.

“The AB was actually created by us,” Formato says. “It’s something I created with a couple of guys from Lincoln College back in 1989. That’s how it started.

“A bit of experimentation led to the AB. It stemmed from something one of our Theology students used to have; chips and meat with garlic sauce all over it. We pretty much expanded on that and created the infamous meal.”

Back at the Red and White, Delvizis begs to differ. “We were making that dish, without a name, for a very long time,” he says. “For 37 years we’ve been selling the AB.” Delvizis took over the Red and White 11 years ago, before which it was a burger bar since 1950. Recipes were passed on by previous owners.

“Some of these recipes in this shop are 35 to 40 years old,” he says. “We make all the ingredients in the AB ourselves; the chicken salt, the marinades and even the chilli sauce.”

Down the road Formato’s team makes its own garlic sauce, too. Its barbeque and tomato sauces are “good quality” store bought versions, like the good old days when the original AB was made with whatever ingredients were at hand.

Both stores do variations including combination chicken and lamb, optional cheese, onion, and vegetarian versions. Back in the day, both stores served ABs wrapped in butcher’s paper, similar to traditional fish and chips.

The clientele is a fiercely loyal bunch. “One customer came in about a year-and-a-half ago and said he used to come in during the early ’60s and have chips, meat and so forth,” Delvizis says. “I said, ‘Oh my God, you’re one of the first people who used to have ABs’. He said he used to have them all the time. But with no name.” He pauses. “This is where we have the discrepancy between us and the cafe up the road. We started making it first, without a name. They labeled it with a name.”

“The urban legend is that there’s two,” Delvizis says. “I’ll tell you about the nicer one first. That’s “Afterbirth”. You can probably work the other one out.”

For sensitivity’s sake, it was shortened to AB and the abbreviation stuck. Since taking over the Red and White, Delvizis changed the name on his menu board to “Atomic Bomb”.

While the origin of the AB may always be a point of contention, the shop owners agree on a few things. “The only two shops in Adelaide who should be selling ABs are us and the Blue and White,” Delvizis says. In the face of competition, they stand united. “I’m not sure about these Halal Snack Packs,” Formato says. “I just say it’s a derivative of the AB. Adelaide University started doing [ABs] through the early ’90s as well. I’m proud that it’s popular and it’s endorsed in that kind of way. My joke is that I’m going to wait until McDonalds starts doing it and then I’ll hit them with copyrights.”

They also agree on the allure of the meaty mix. “Start with the classic,” Delvizis says. “It’s like an explosion of flavours, the way they all mix together. It’s like euphoria and once you start you can’t stop.”

Formato warns they are not for the faint-hearted. “It really is a meal within a meal.”

“Everyone loves them,” Delvizis says. “All races, creeds, ages, daytime, night. We’ve got people in their twenties, thirties, forties, fifties and sixties coming in. Even 70 year olds who say, ‘We used to come here back in the day when there was no Maccas and no Hungry Jacks'.”

Blue and White staff are devoted to friendships they’ve forged with customers and also have a die-hard following.

“Grandmothers come in with their grandkids to have one,” Formato says. “We’ve got an old couple who have been coming here for 30 years. They’re in their eighties and have [an AB] once a week.”