A Cup Made from Coffee Waste

Its creators have an ambitious aim: to make coffee farming a zero-waste process. 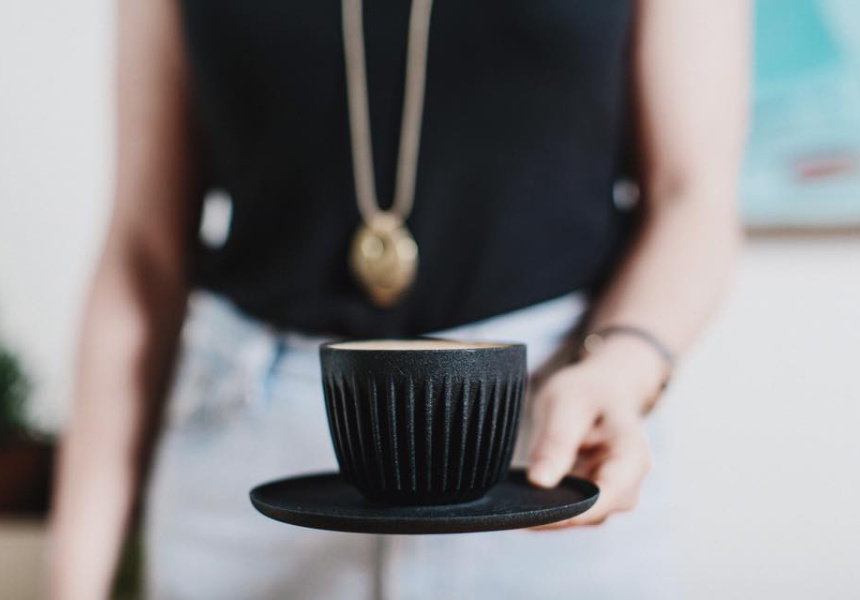 The next step in the reinvention of coffee-drinking vessels is the HuskeeCup. It’s a cup and saucer made from coffee husks (a waste product of the coffee production process) and its designers hope it will replace the traditional ceramic variety used throughout the cafe industry.

The cup, which comes in four-, six-, and 12-ounce sizes, is custom-designed for coffee drinking – contoured for milk integration, with fins for grip and thermal dispersion.

HuskeeCup was borne from the idea of creating products using waste material from coffee production. It was generating by a team of people from the coffee industry: Joshua Jagelman, a coffee grower and director of Yunnan Coffee Traders; Saxon Wright, founder of Pablo and Rusty’s; and Adrian Chen, Michael Chin and Nicole Barnes. They worked with Vert Design’s Andrew Simpson and Edward Ko on the product’s design.

Zero waste is their ultimate goal, says Barnes, the company’s operations manager. They hope a Kickstarter campaign will raise the capital needed to get the project off the ground. The production phase is scheduled to run until November, before distribution commences in December.

When preparing coffee, ripe coffee cherries are harvested and then processed. The next step, milling – where coffee is hulled, polished, graded and sorted – generates the husks. Roasting and brewing complete the process.

To make the cup, coffee husks are blended with other materials such as eco-friendly polymers and dyes. A machine then presses the blended material into the design. The result is durable, dishwasher-friendly and recyclable.

To source the husks, HuskeeCup has partnered with Yunnan Coffee Traders, which is similarly committed to sustainability. The cup will also be manufactured in Yunnan, a high-altitude region that shares borders with Vietnam, Laos and Myanmar, and is the capital of China’s fledgling coffee industry.

HuskeeCup is made from a renewable resource – and a waste material at that. On the other hand, says Barnes, “sourcing the raw materials needed for ceramics often involves large scale, ecologically destructive mining operations”.

“Unlike ceramics, HuskeeCup's moulding process is a one-off event at less than half the temperature of commercial kiln firing,” says Barnes. “Additionally, ceramics often require three separate firings including a glaze firing at extreme temperatures for sustained periods, with huge ecological implications and emissions.”

The team also claims to beat ceramic when it comes to sustainable packaging and transport. “Given HuskeeCup's durability and shape, we are able to stack our cups and ship them in much larger quantities than ceramics. This means we lower our eco-footprint through our minimal use of cardboard, while minimising CO2 emissions in the transportation process, since fewer vehicles are required to transport our product.”

HuskeeCup is not designed to last a lifetime. At this stage, three years is its expected lifespan. “We are still formulating and testing the final material, however based on the lifespan of products made from similar biopolymers, like rice husk, we are confident that three years is a conservative minimum,” she says.

“But what really excites us is that HuskeeCup will far exceed ceramics in its working lifespan, since it isn't prone to chipping or cracking. In a cafe environment where this happens to cups frequently, cafe owners are forced to replace their ceramic cups far sooner than they otherwise would have to if there weren't so many breaks from wear and tear.”

Update on June 21: The Kickstarter campaign is live.