Australian Native Foods: To Forage or Not To Forage?

Two of our hottest food trends – foraging and native food – seem to go hand in hand. But should they? 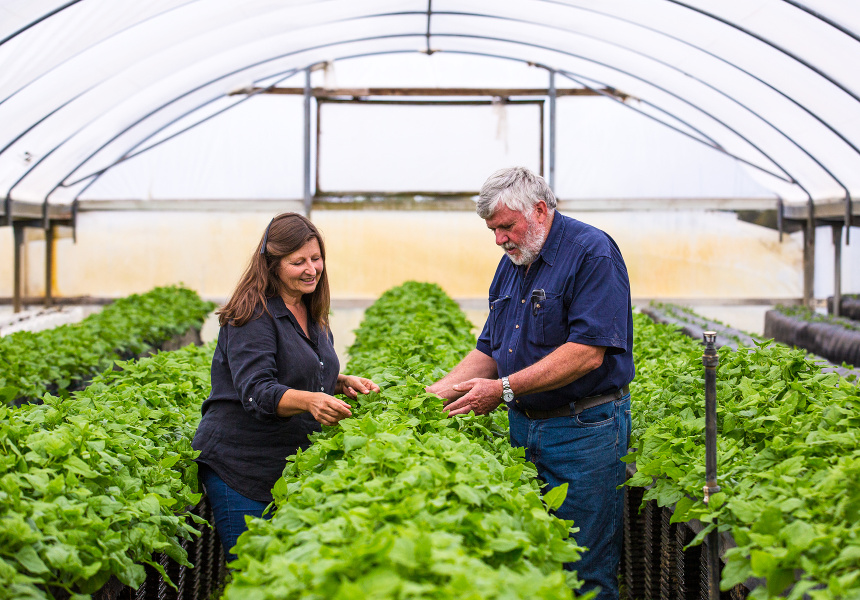 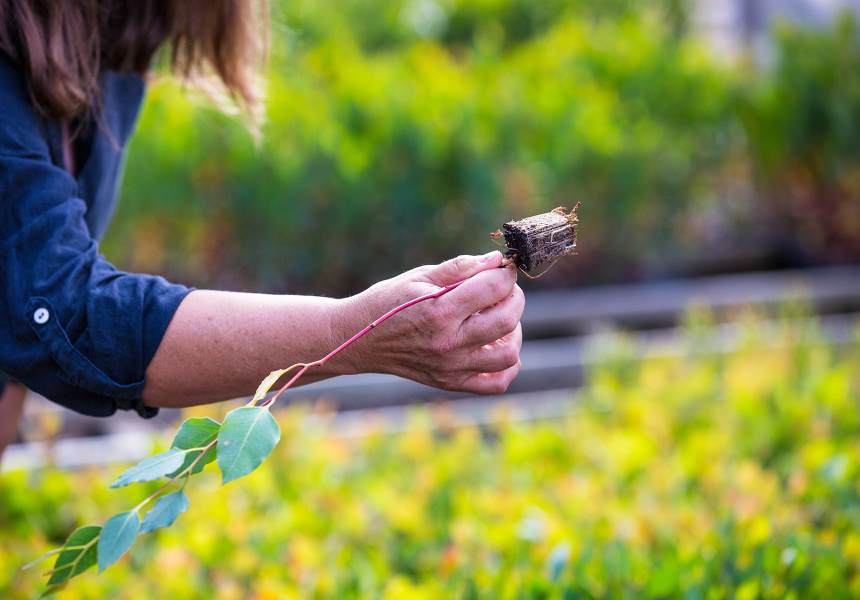 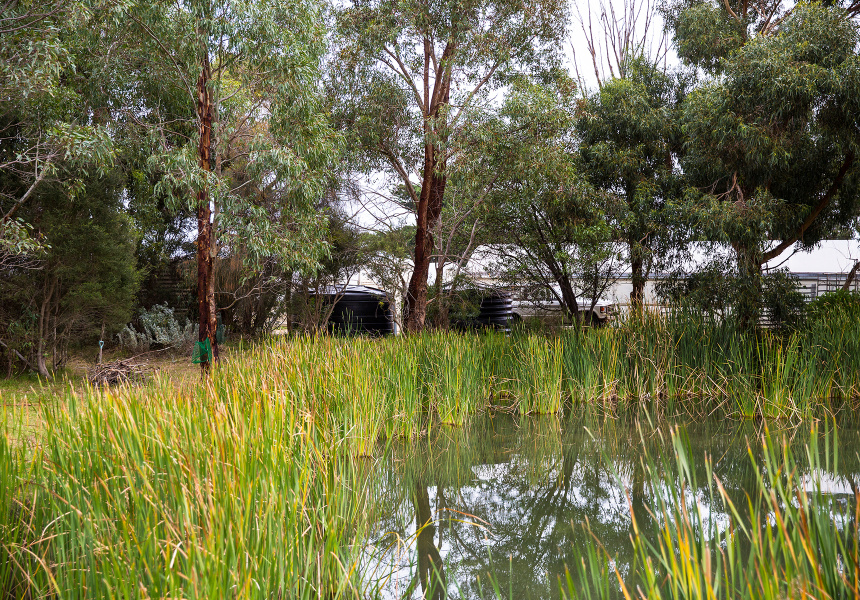 It’s a question many of us have wondered when dining at a top-flight Australian restaurant and presented with a carefully-created, incredibly delicious meal of native ingredients: How on earth do they forage so much in the wild?

The answer is, they don’t. Most of the native produce served at restaurants such as Magill Estate, Quay and Pei Modern, is grown at the Outback Pride nursery at Reedy Creek, South Australia. Broadsheet took a trip to Reedy Creek to meet horticulturalist Mike Quarmby and his wife, artist Gayle Quarmby at the operation that supplies native produce to some of the country’s highest-profile restaurants. The visit was sparked by the intense interest in a piece about the book I wrote on native food, and the questions that were raised when it was published. Should foraging for wild native produce be encouraged? If not, why? And if we opt for cultivated native produce, will it have less nutrients than its wild-grown equivalent? But first, let’s see the farm.

Driving through the flat, dry south-east of South Australia, it’s hard to imagine a horticulturalist coming here for the water. But that’s what drew Mike Quarmby.

Starting in the mid sixties, Mike operated nurseries supplying the cut-flower business. By 1973 he had one of Australia’s largest cut-flower operations. In 1978 he moved to Alice Springs, eventually growing native flowers. That’s where he developed a real interest in native foods.

“The big problem in all the nurseries I’ve had around Australia was water,” says Mike, “and that’s why we moved to the south-east in 1996 and set up Reedy Creek.”

The secret to Reedy Creek is its bore water. There are two bores on the land, the second and deepest one supplying abundant fresh, clean water all the way from Mount Gambier. It’s enough for the Quarmbys to have built and filled 26 greenhouses on six hectares, with more on the way. At first, they propagated grapevines and produced up to four million trees a year for the forestry industry. Then tragedy struck.

The death of their 20-year-old son forced Mike and Gayle to take stock of their lives. In 2001 they decided to start a business that would both recognise and work positively for Indigenous Australia.

Since then, Mike and Gayle have covered 750,000 kilometres, visiting remote communities and heading out with elders to collect wild plants. “They showed us the best plants and we took those plants in cuttings with the roots on them back to those communities,” Gayle explains, adding that they also took samples back to Reedy Creek to propagate.

In addition to the 32 species of native foods planted in the nursery, Outback Pride has planted 500,000 plants in Indigenous communities.

“As it is with flowers and vegies to a certain extent,” Mike says, “it’s better to start with a grafted plant or cuttings.” This process creates a more robust plant. “With the knowledge and the facilities back here at Reedy Creek to do it, we set out to change the native-food industry to use more of an advanced technical practice.”

As we walk through greenhouses bristling with vigorous plants, chewing on savoury saltbush, succulent ice plant and the tart and juicy fruit of the magenta lilly pilly, we talk. Why cultivate native plants? What’s wrong with foraging?

“Foraging, or picking Australian native plants from the wild,” Mike says, “is breaking the law. If you take plants out of the bush, you’re depleting the seed source and the natural regeneration of those things.” It almost seems like sacrilege to say so in this era when the bush is crawling with chefs foraging for fodder, but Mike is right – foraging is illegal unless you have a picker licence, which in NSW includes restrictions such as only being able to pick certain species of plants.

It’s one thing for Indigenous people with a deep understanding of what they’re doing to pick for their own use. Quite another for people to forage without understanding the possible problems of pulling up anything they see. It’s possible they may take a unique and irreplaceable specimen from the wild, and it’s worth remembering that some native plants are poisonous, and some plants appearing on restaurant plates aren’t actually “Australian”.

Given the native-food theme of Noma Australia’s presentation, it seemed off that lantana, a poisonous and non-indigenous weed, appeared on the menu. Mike sees perhaps an even bigger problem there.

“A lot of recent foraging has been led by European people or by people who've gone to Europe and seen it being done. What they’re harvesting in many cases are introduced weeds,” he says. “The problem with that is, by harvesting them as wild food, the whole essence of Australian native food and its links with Indigenous people is watered down and confused to the point where the public will lose interest.”

Simon Bryant, Adelaide chef and creative director of the Tasting Australia festival, is one who chooses not to forage. “I don’t think I have the knowledge, whether it’s because I’m not choosing the best tasting saltbush or because I don’t know if what I see is a rare example,” he says. “Even when I’m taken out on country by someone who understands what they’re picking, I’m just a visitor. I can’t say I’m not tempted, but no, I buy my ingredients. And that puts revenue back into the community.”

Indigenous chef Clayton Donovan (of former restaurant and now catering and event company Jaaning Tree) has a more flexible view. “I don’t think you should throw a blanket over [foraging]. It’s a better idea to educate people,” says Donovan. “On the other hand, you should only take what you need. Don’t rape and pillage the bush. You should be concerned about where you get it from. You can’t just barge into a state forest or a place of heritage.” Clayton admits he has an advantage. “I’ve got a lot of aunties and uncles and I can find out lots from them.”

One chef who does forage is Matt Stone, currently at the Oakridge winery restaurant in Victoria’s Yarra Valley. “I do pick some native ingredients around the valley,” he says. “It’s like any other foraging: it’s a good thing to encourage, as long as it’s done responsibly and respectfully, by which I mean pick only what you need, not taking whole plants.”   Stone’s been doing this for a while, and recently ran a restaurant dinner at which 85 per cent of the ingredients were foraged. He gained his knowledge from reading, and from a local dairy farmer, Jack Holman, who has lived in the area for 20 years, and has himself learnt from local Indigenous people.

For those who decide not to forage, does using cultivated produce adversely affect the famously high level of nutrients contained in our native foods? When asked this question, Mike and Gayle both burst out laughing.

“The varieties of things we grow, virtually all of them have been tested for nutritional values,” says Mike. That testing has been done in conjunction with CSIRO and the Rural Industries Research and Development Corporation. “The results that have come back have been right off the scale,” he says. Certain species, like the Kakadu plum, have jumped out as exceptionally high in nutritional values, as was the case when wild-caught plants were tested.

Research scientist Dr Izabela Konczak, who has spent some years studying the nutritive components of native foods, is a little more cautious. But why would the concentration of nutrients be higher if picked from the wild? Two reasons: soil and climate.

But it’s the climate that has most profoundly influenced native plants. Australia is the world’s second-driest continent – after Antarctica – with an average mean annual rainfall below 600 millimetres over 80 per cent of the country (at time of writing). The average January temperature over most of the country exceeds 30 degrees Celsius, but overnight frosts are common inland, and it gets cold in the south. What has this got to do with plant nutrients? In a word: stress.

With such extremes of climate, plants need to protect themselves. “Plants are stressed a lot,” said Dr Konczak. “The elevated level of compounds in the plants helps plant cells to survive.” And, essentially, more compounds means more nutrients.

“Probably if we cultivate,” she says, “the concentration of nutrients would be lower. But also we might be benefited, because the fruit would be easier to market and what would be left would be plenty, because this food is so rich in nutrients.”

So you can rest assured, as you munch on those muntries or chew on that farmed quandong, they’re not only high in the nutrients you need, but they haven’t been ripped out of a delicate environment.