After Toasta & Co customers began asking how to perfect their toasties at home, owner Rebecca Feingold decided to give them the tool they need. 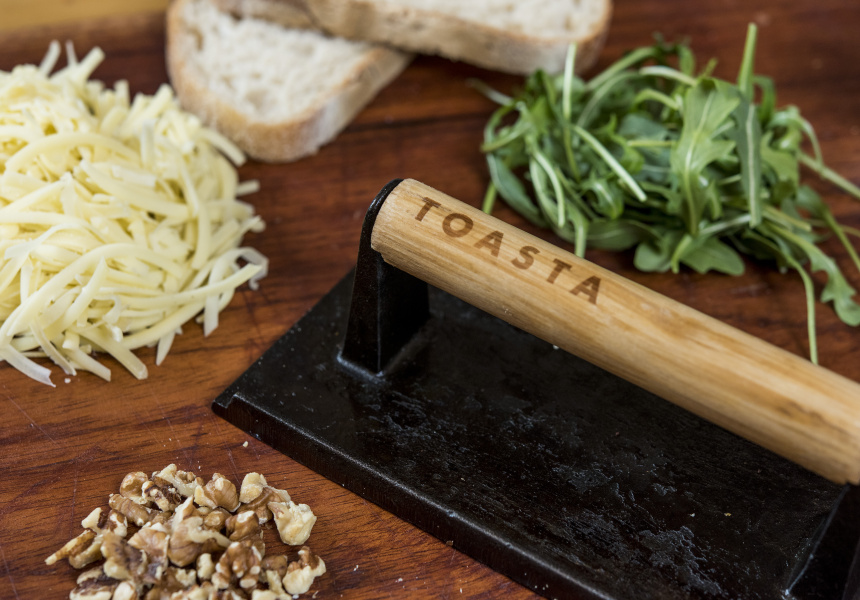 West Melbourne’s Toasta & Co. knows how to make a good toastie. The business started as a food truck before opening a permanent store in 2016.

Owner Rebecca Feingold says half the battle of perfecting her toasties came down to finding the right toaster. Eventually she landed on a different kind of implement: a custom-made cast-iron press that weighs one kilogram.

“It was a lot of trial and error,” says Feingold. “We tried every technique under the sun and we discovered without a doubt that using the cast iron is what helps make our toasties so special.”

The benefit of using cast iron is in its ability to conduct and retain heat, Feingold says.

“Combined with the right amount of pressure with the weight, it manages to give the toasties the perfect melt and crunch. It cooks it low and slow,” she explains. “Even though we put quite a bit in the [toasties], it cooks them really evenly and thoroughly through, without burning the outside. Often with the conventional toastie press you’ll find that the outside won’t go crisp enough once it’s cooked through.”

After customers began asking how they could achieve the Toasta result at home, Feingold decided to sell the presses. If you can’t make it to the Melbourne store, you can buy one online for $40.

“The press is also perfect for cooking burgers, bacon, steaks and other meats,” Feingold says. “They’re compatible with all heat sources, so they work on the open campfire or in the kitchen or on the barbeque.”

Once you have your press, Feingold has a few other tips for upping your toastie game.

“Bread is half the sandwich, so it’s so important to use a beautiful quality bread,” she says. “It’s really important to double layer the cheese ... Our signature three-cheese blend goes in most of our toasties, which is a Swiss, a cheddar and mozzarella.

“People think you can’t really go wrong with a toastie, but it’s the beautiful produce that takes it to the next level.”

But above all, she tells fans to get creative. “It’s all about food that helps you reconnect with your inner child,” she says.