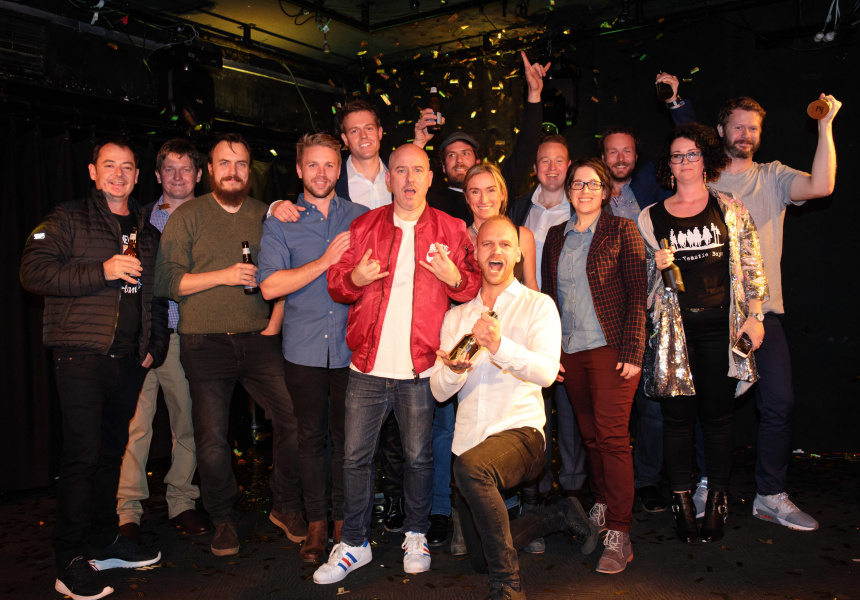 The Young Gun of Wine awards were announced last night in Melbourne, with South Australia’s trailblazing vintners taking out three of the four awards.

After winning the Winemaker’s Choice crown two years running, Murdoch Hill’s Michael Downer has taken out the top honour of 2017 Young Gun of Wine. The Adelaide Hills winemaker was presented his trophy by 2016 winner (and 2017 judge) Josephine Perry of Dormilona in the Margaret River, Western Australia.

“Michael has been building a very strong reputation and catalogue of convincing wines that are both experimental and at the same time really honing traditional fine wines,” says Young Gun of Wine founder and judge Rory Kent.

“He came into the family vineyard a number of years ago and brought all the winemaking in-house when previously it had been outsourced. He’s probably the first winemaker you’d name when you have a conversation about the exciting things happening with pinot meunier [a red grape Kent calls the “poor cousin” of champagne] in Australia the last couple years. That’s been an emerging, fun variety.”

It’s a common theme among this year’s finalists. WA’s tipe.iscariot is notable for “championing” the chenin blanc grape, “which has been considered a bulk wine variety,” Kent says. “They're finding these old vineyards and giving them love and respect and making incredible fine wines out of what has previously been considered inferior material.”

Winemaker’s Choice – voted by the 12 finalists – went to John Hughes of Rieslingfreak in the Clare Valley, and Best New Act was awarded to Rob Mack from micro-label Aphelion in McLaren Vale.

The announcement is a coup for South Australian winemakers, who made up half the national top 12 with finalists Anna Hooper from Cape Jaffa (Limestone Coast), Charlotte Hardy from Charlotte Dalton Wines (Adelaide Hills) and Vanessa Altmann from Switch Organic Wine (Eden Valley).

The People’s Choice went to Peter Dredge (a former South Aussie now based in Tasmania) for his newly launched Meadowbank wines. The vote was cast at two public tasting events held in Sydney and Melbourne.

The four winners were plucked from 200 candidates. A top 50 was announced earlier this year, where the Danger Zone award for “most adventurous wine” was given to Western Australia’s Brave New Wine for its 2016 Wonderland Botanical Riesling infused with native botanicals.