Inside the Mind of Wylie Dufresne

One of America’s most influential chefs is coming to Melbourne. 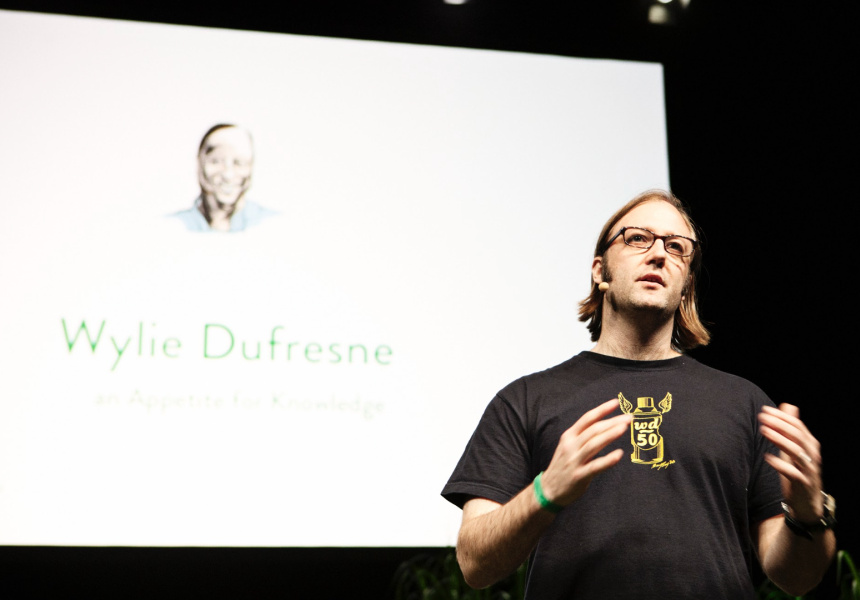 In a 2009 interview with the Huffington Post, Momofuku frontman David Chang called Wylie Dufresne “America’s most under-appreciated chef” before describing his Lower East Side outpost wd-50 “probably the most important restaurant in New York”. Care of his no-stone-unturned approach to food and his zest for transmutative cooking, Dufresne was regularly namechecked in the same sentences and stories as modernist chefs Heston Blumenthal and el Bulli’s hugely influential Ferran Adria. Intriguingly, eggs were the inspiration behind some of his more talked-about dishes, including a coconut and carrot trompe l’oeil and his minimalist, three-part reimagining of Eggs Benedict. Then there’s that incident three years ago when 29 of the world’s most feted chefs snuck into New York to throw Dufresne a surprise dinner party because they heard the much-loved chef was going through a rough patch. (“Imagine if someone did all this for you,” said Attica’s Ben Shewry, one of the chefs involved in the covert operation. “It would be the highlight of your career”).

Although wd-50 is no longer (the restaurant closed in 2014 after thrilling guests for 11 years), the restaurant’s inquisitive spirit lives on in both Dufresne and its alumni, among them Momofuku Seiobo chef de cuisine Paul Carmichael and Dan Hong from the Merivale Group. Come April, count on Dufresne infecting more Australians when he appears at this year’s edition of the Melbourne Food and Wine Festival. Although this will be his first visit to Victoria, Dufresne did make it to Sydney in 2010: between his experiences there and working alongside many an Antipode in New York, he’s got a rough idea of what to expect while he’s here and he’s excited.

“I think you guys have a great energy and enthusiasm,” he tells Broadsheet via phone from New York. “All the Australian people I’ve had the good fortune of running into have been very positive in spirit.”

As you’d expect from someone with a reputation as a deep thinker, Dufresne speaks deliberately and expresses his opinions carefully. He tells me about his newest project, which is in the works, Du’s Doughnuts, a doughnut and coffee store due to open in spring (our autumn) that will apply wd-50’s critical, how-can-we-do-this-better? approach to America’s favourite pick-me-up.

“We’re going to take some traditional flavours and combinations that are out there and look at them through a new lens,” he says. “There’s nothing wrong with the doughnut, we’re just excited about the chance to build a better one.”

Welcome to the world of Wylie Dufresne.

Broadsheet: When people think of Wylie Dufresne and wd-50, they think of taking risks. Tell us about your approach to cooking.
Wylie Dufresne: We were just, and still are, trying to learn things. I don’t think there’s a right or wrong way to poach an egg or cook a piece of fish: there’s just a more or less informed way. I just wanted to make sure we understood as many of the different variables in order to make better decisions about how to achieve a particular result. The exciting thing about cooking is that it’s a never-ending learning curve. You’re never going to learn it all. No matter how hard we try, there’s always going to be more to learn.

BS: Was there a light-bulb moment in your career that led you down this path?
WD: No, I don’t think there was a specific thing. It’s more a matter of my parents encouraging me to ask questions and being sort of a curious mind myself. When it comes to cooking, you do something 99 times and it comes out the same way, but then on the 100th time you suddenly get a different result and you wonder, “why? What did I do wrong? What didn’t I do right? What was the variable that caused it to change?” That’s what it was for me; realising that there was a lot I didn’t know and asking how I could go about learning it.

BS: When wd-50 announced its closure in 2014, a lot of people took the news badly. You’ve have three years to reflect on the restaurant’s story: how would you like wd-50 to be remembered?
WD: I would like it to be remembered for having contributed to the conversation, to the dialogue. That we helped create a bunch of delicious food. That we created some fun and delicious techniques. That it added to and helped enrich the dining culture and scene in New York City. I would hope in some way shape or form, all those people that worked there left the place better than they found it.

BS: When you spoke at Rene Redzepi’s MAD Symposium in 2012, your presentation revolved around your appetite for knowledge. How has not running and owning a restaurant for two years affected that hunger?
WD: I continue to have that hunger for knowledge, it just moves around. Right now it tends to be somewhat doughnut-centric, but that’s where we are for now and not where we’re going to say. Hopefully this is a business we can build and grow and we can find our way back to more traditional restaurants where we can continue building off the body of work that we created. There’s no lack of curiosity and there’s no stopping the asking of questions. That’s going to keep going and going.

BS: Your risk-taking extended to the choice of restaurant location. When it opened in 2003, wd-50 was one of its generation’s first restaurants in the Lower East Side (LES). What was life like at the tip of the spear?
WD: The LES was a little rough and tumble, but none the less very welcoming to me. Like a lot of New York City and the world, it’s changed quite a bit, but the LES has been in a constant state of flux. Before we were there, there was a very heavy Hispanic community and before that it was filled with Orthodox Jews and Irish immigrants. The neighbourhood continues to ebb and flow, much in the same way New York City continues to ebb and flow. I don’t think for better or worse, but for matter of fact.

BS: Like the rest of the world, New York’s food scene has seen plenty of growth in the casual end of the market. Why do you think that is?
WD: I think it’s a combination of a number of things. It’s a result of the changing palate of the dining public. It can also be a function of growing real estate prices and some of those pressures that they can put on restaurants. But I also think chefs are creative, restless people: they want to explore other ways of expressing and thinking about food and rightfully so. That’s what’s exciting. You’re seeing very clever people apply themselves in new ways and different mediums that were, at one time, considered off-limits. Maybe we’re not seeing as many fine-dining restaurants opening as we once did, but that will come back around. It has a cyclical nature and there will always be a place for those restaurants.

BS: Where does Wylie Dufresne like to eat in New York?
WD: Some of my dearest friends are chefs in the city and I like to go see what they’re up to, whether it’s Mark Ladner at Del Posto or seeing what [David] Chang is doing. I like to mix that up with checking in on the newer kids on the block, people like the guys at Olmsted in Brooklyn. There’s a lot going on in this town at any given time and from high to low. Whatever you want to try, there’s an opportunity to scratch that itch.

BS: What do you know about Melbourne?
WD: I’m cooking some meals and doing two classes at the festival, so I’m excited about that. I’m really excited to eat at Attica. I’ve never been but I’ve heard great things and Ben [Shewry] is a great, great man. Right after wd-50 closed, one of my sous chefs [Reggie Soang] went and worked for him. I’ve heard a lot of good stuff from him, plus the world speaks highly of Attica so I can’t wait to see what Ben’s been up to.

BS: When wd-50 was closing, you mentioned there were plans to reopen it in the future. Is that still the case?
WD: I don’t have the answer to that. Its spirit will live on forever and certainly whatever we do will stand on the shoulders of wd-50 but I don’t know if it will come back. If we get enough requests, maybe.

Wylie Dufresne is one of the international guest chefs at the 2017 Melbourne Food and Wine Festival (March 31 to April 9). Tickets to his lunch at The Town Mouse on April 5 are sold out however you can still get tickets to his “Watch and Learn Masterclass” at Deakin Edge on Saturday April 1. Tickets are $35 and available online.