Your first mistake? Not rinsing the noodles in a cool stream. Plus, suggestions for pimping your noodles from experts and aficionados, including Dan Hong. 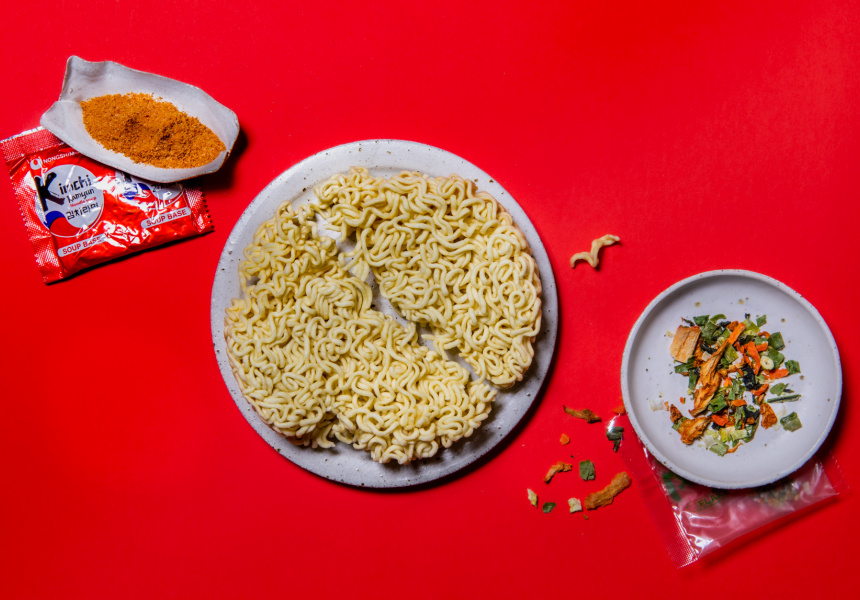 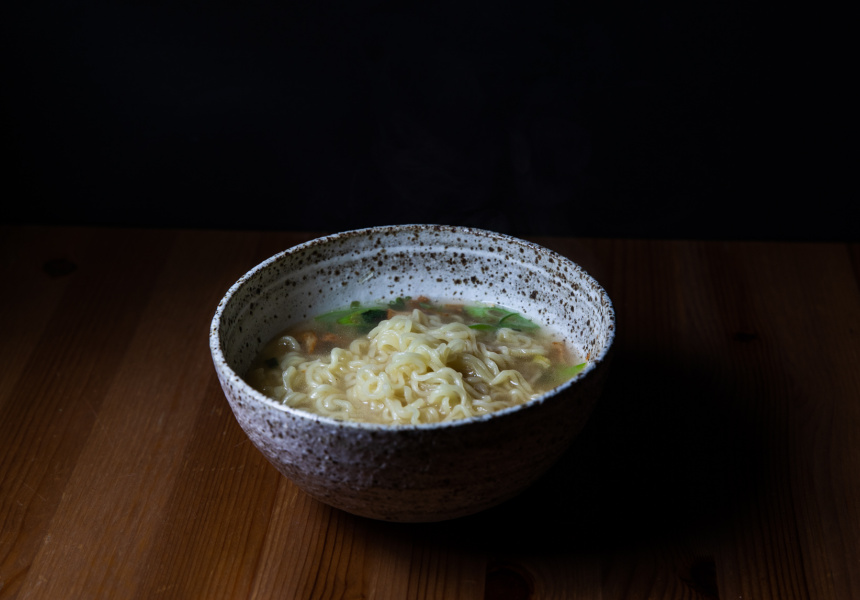 When Arthur Tong first saw his sister-in-law making instant noodles, he was gobsmacked. “She put the raw noodle cake into a bowl and poured boiling water over the top like it was cup noodles. I couldn’t believe it was happening in my own house. I mean, how lazy can you get?”

Tong, whose curated online Asian grocer, Asian Staples, is as much about education as it is about purchasing pantry goods, is very particular about the way he makes noodles. Growing up in a Cantonese family, first in Hong Kong and then Sydney, the sanctity of making and eating noodles extends even to the instant kind.

Tong says the most basic step isn’t even written on the package. “You have to gor lang ho your noodles. In Cantonese it means ‘to rinse in a cool stream’. When you first boil the noodles, the water becomes greasy and yellow from the [processing] oil. Why would you want to drink that?”

According to Tong, the correct method for cooking instant noodles is as follows: bring a saucepan of water to a rolling boil and immerse the noodles. Cooking time varies, but Tong recommends following the packet instructions (usually a couple of minutes). Once cooked, drain and rinse the noodles under a stream of cool water to stop the cooking process and discard the oily boiling water. Boil fresh, clean water to make your soup broth, reintroduce the noodles and packet seasoning, and then add toppings if you want them. This, he says, makes instant noodles just that little bit more healthy.

“Stir-in” or “mixed” instant noodles, where the water is drained and the noodles are eaten dry, is a different story. “They’re in another category, in which Mi Goreng by Indomie reigns supreme,” says Tong. “They already get drained by default, but rather than using cold water, I prefer to run hot water over them to keep the noodles warm. Rinsing is not as essential in the stir-in styles.”

The other important factor in instant-noodle making is cooking time. Tong says you shouldn’t think of the noodles as pasta and aim for al dente. “In Hong Kong, al dente is called dan hao, which means ‘bouncy mouth’. The textural feeling of dan hao – every single person in Hong Kong will know what you mean. It’s when the noodles have a pleasant pushback.

“With instant noodles, you don’t want them dan hao, you want them slightly on the puffy side, but not soggy and flaccid. Instant noodles aren’t made with natural ingredients, so if you under boil them they break and it’s not a pleasant sensation,” Tong says.

Dan Hong, Sydney chef at Mr Wong, Ms G’s and Lotus 2.0, takes a different approach. “Instant noodles are meant to be about convenience,” he tells Broadsheet. “I don’t want to make it so fussy. I just follow the instructions on the packet because the instant-noodle makers know – they invented it.” But Hong does deviate from the instructions for cooking time. “I think you should cook them for a minute less than what they recommend, so what you get is al dente to start. It won’t last long, so eat fast. If you let your noodles sit in soup, they’re going to get soggy.”

Nick Smith, owner of Sydney’s communal motorbike workshop and ramen bar Rising Sun Workshop doesn’t often buy supermarket instant noodles because he has fresh noodles in plentiful supply, but he appreciates their role in bridging cultures. Instant noodles were invented by Nissin Food founder Momofuku Ando in post-WWII Japan as a way to address food shortages. The first version, called Chikin Ramen, came out in 1958, and employed a flash-fried method to preserve the noodles.

“I love that story,” says Smith. “He saw his country in tatters, people needing something in their bellies, and he invented something to help Japan back on its feet. It also has probably done more to spread Asian culture than anything else. I mean, all of a sudden you have people at university in Sydney or Austin, Texas, eating Asian food they never had access to before.”

Although their cooking preferences may vary, Tong, Smith and Hong are united in the belief that there’s a whole universe of noodle-pimping options. “I keep different condiments in the fridge door to use,” Smith says. “A jar of chopped shallots mixed with grated ginger, oil, vinegar and soy, and kimchi or pickled shiitakes.”

A fried egg is also essential. “A boiled egg is nice, but a fried egg’s got crispy bits for texture and if you cook it soft, it’s self-saucing,” he says.

For Hong, instant noodles are an opportunity to use up ingredients on their last legs. “I put in whatever leftover vegetables there are in the fridge, and things like meatballs, sausages, fake crab sticks, whatever,” he says. “Also leftover kimchi, when it starts to go funky and fizzy and sour – that’s the best type of kimchi to flavour the soup.”

Tong isn’t a chef, but the care he takes making instant noodles shows respect for even the most humble ingredients. “Doing instant noodles this way requires little skill but a little bit of effort, and that really appeals to me,” he says. “The fundamental philosophy comes from the desire to make the most basic things – even if they’re bad for you – as good as possible. Making the best out of any situation. Isn’t that what life is about?”