Becoming a notable name in hospitality relies on more than a good idea or a slick fit-out. Every great career is guided by mentorship. In anticipation of the new Broadsheet Kitchen event series, we’re speaking to established industry personnel about the people, ideas and circumstances that helped guide them to success. 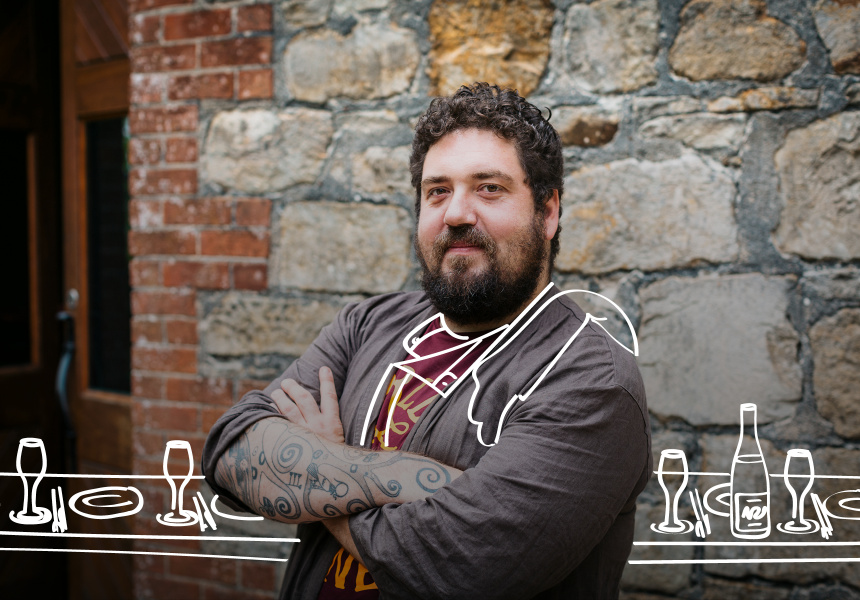 Duncan Welgemoed is a force to be reckoned with. Considered one of Australia’s best (adopted) cooking talents, the South African-born chef has had a far-from-typical career trajectory.

His first “real, proper, getting-the-shit-kicked-out-of-me kind of job” as a chef was at French restaurant La Bouchee in South Kensington, London. From there, he did stints at Fat Duck and Restaurant Gordon Ramsay before moving down under. Today, Welgemoed is head chef and co-owner of Adelaide’s renowned “ugly-delicious” Africola, plays a hand in the newly-established Drink Easy awards, and can often be found putting on a masterclass or feeding the masses at food festivals around the country.

As we launch the new iteration of our Broadsheet Kitchen series, which highlights and assists emerging talent around Australia, we’re focusing on the role mentors play in the hospitality industry. We caught up with Welgemoed to press him about his personal journey and to ask: who told you you were good?

Broadsheet: Did you always plan to become a chef?
Duncan Welgemoed: I didn’t, actually. I planned to become an Egyptologist. I left home when I was 16 [or] 17 [and] moved to London. Pretty much straight off the plane I got robbed at a strip club, lost all my money, and the only thing I knew how to do, mildly, was to hold a frying pan. Because my dad was a chef, so I grew up in hospitality. That was it. It hasn’t stopped since, although I hold the pan a lot less than I used to.

BS: When did you realise you were becoming one?
DW: Probably when we won our first Michelin star at The Greedy Goose in Oxfordshire a few years down the track. It was myself – I think I was 18 or 19 – and Michael North, who was 23. It was the two of us in the kitchen, and eight months into working together we won a Michelin star. That’s when I knew, well, this is pretty serious.

BS: Who first told you you were good?
DW: Fuck knows. It’s one of those things that’s like, “Am I good? I don’t know. Am I shit? I don’t know.” I’ve always been very self-deprecating. The more awards we win, it doesn’t really make any difference. The biggest thing is having a full restaurant.

Marco Pierre White is a really big mentor, one of my greatest friends on the planet, someone I consider family. Norbert Niederkofler has three stars in a restaurant called St. Hubertus at Rosa Alpina in Italy – he’s always been very impressed by my work. [Plus] [Matty Matheson](https://www.broadsheet.com.au/sydney/event/matty-matheson) [and] various rock stars around the world. [But] people vote with their feet and that’s the thing to me. If we weren’t doing a good job, we’d be dead.

BS: Who in the restaurant business did you look up to and why?
DW: I’ve always looked up to Marco Pierre White … in the sense that he is the greatest chef of the 21st century. He changed the face of modern cooking. I’ve always respected his fluidity between his roles as a chef and restaurateur.

The other person I deeply respect in the business of restaurants is my business partner, James Hillier. He’s arguably one of the greatest hospitality minds in the world today. There’s no-one I know that knows more about what chefs are cooking, what trends are happening, what restaurants are doing, what business plans are being created. His finger is so on the pulse. You’ll never hear about him in the press. He’s completely and utterly in the shadows, where he wants to be.

BS: Tell me about an early fail in your career.
DW: Is this professional or personal? [Laughs.] The destruction of my personal relationships. Not finding the balance … I suppose there’s a big conversation between hours versus job. I sit completely outside of that because my job is a lifestyle, it’s not a fucking job. You live, you breathe this, all the time. Your confidence is always muddled with arrogance in people’s perception. It’s the failure to integrate into normal society, and live within those parameters, which I refuse to do.

Realising I’d wasted my time, a good part of eight years, working in Michelin star kitchens with regards to wanting to cook that type of food – that was pretty devastating. I was homesick cooking in those kitchens. Because I wasn’t actually cooking the food I wanted to cook, the food I grew up with. I wasn’t acknowledging my history, what I learned from my parents, in terms of food and cooking and the table. There’s a tunnel vision and you lose the fundamentals of why you do this in the first place. It taught me discipline and technique, but that only goes so far without regurgitating their fucking food.

BS: Once you were on your way, how did you decide what type of career to have?
DW: I’m still figuring that out. I think what I do is quite unique and varied. Obviously my meat and potatoes are in the kitchen as a chef and a cook, but I’m still trying to define what I am. I’m involved in media, I put on events, I do festivals, I work with bands and artists. The big part of what I want to be doing is absolute freedom. If your restaurant is sustainable in business, staffing and mentality, then you’re free to explore. I don’t think anyone should be put into a fucking box.

BS: What excites you about collaborating?
DW: Hanging out with mates, seeing new techniques and styles you wouldn’t be privy to before. More than anything it’s about extending your community. I can go into any city in the world and have friends, because it’s connected with food.

BS: What are the signs in up-and-coming talent that show promise? What advice do you give them?
DW: What I look for is sheer grit and determination, because this industry is fucking hard and brutal. You will be working long hours. Don’t get me wrong, things absolutely need to change. But like in any industry, you have to give it your all. You can always see it in chefs, the pressure in their eyes; they just live for it. You can learn skills, but if you have the right attitude you can achieve anything.

BS: What do you know now that you wish you knew then?
DW: That it’s all disposable. Awards, praise, all that shit. It means nothing. Had I known that 20 years ago, I would have gone out on my own path a lot sooner.