Becoming a notable name in hospitality relies on more than a good idea, seizing the zeitgeist or a slick fit-out. Every great career is guided by mentorship. In anticipation of the new Broadsheet Kitchen event series, we’re speaking to established industry personnel about the people, ideas and circumstances that helped guide them to success. 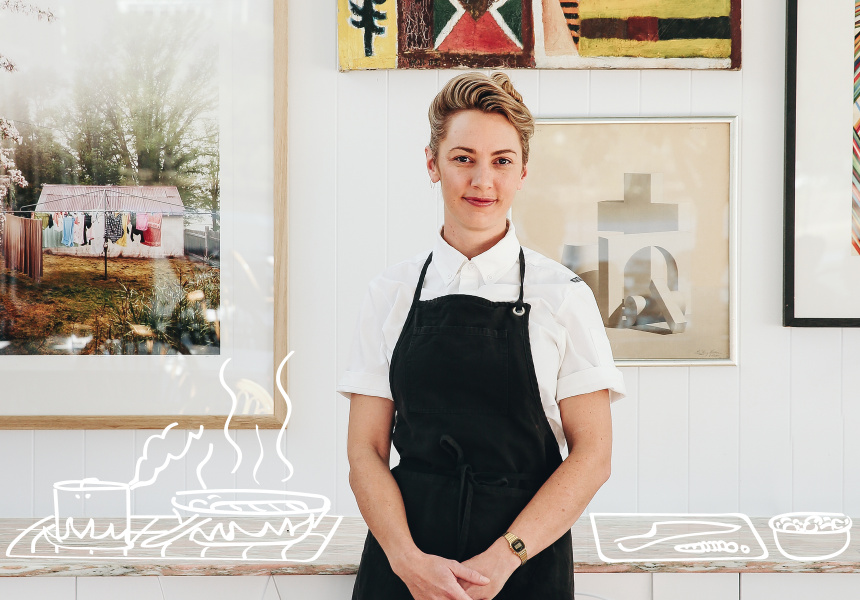 Alanna Sapwell has plied her trade in three different countries, but the globetrotting chef got her actual start in a play kitchen at the age of six. That childhood passion for cooking eventually led to an apprenticeship at The River House in Noosa before stints in Florence, Italy and Hakuba, a village in the Japanese Alps.

Returning to Australia, she joined the team at Brisbane’s degustation-focused Urbane, working her way up to head pastry chef – a position she would next hold at the riverside Aquitaine Brasserie. After two years at Sydney seafood destination Saint Peter, Sapwell returned to her home state to take the top spot in the kitchen at Brisbane’s Arc Dining and Wine Bar at Howard Smith Wharves. But for all the goals she’s kicked over the years, she hasn’t done it alone.

As we launch the new iteration of our Broadsheet Kitchen series, which highlights and assists emerging talent, we’re focusing on the role mentors play in the hospitality industry. We caught up with Sapwell to press her about her personal journey and to ask: who told you you were good?

Broadsheet: Did you always plan to become a chef?
Alanna Sapwell: From the age of six, I knew I wanted to cook. It was as simple as trying a great pizza and wanting to recreate the quality and the level of enjoyment that I got out of it. From then on, while my friends were playing with Barbies, I was in the play kitchen making imaginary food.

BS: When did you realise you were becoming one?
AS: My first creations in the kitchen at home for Mum and Dad weren’t anything to be particularly proud of. In fact, they were terrible. But as soon as I could work, I started as a kitchen hand at what was the best restaurant in a small town, and I started to understand restaurant food. It all built from there. Still to this day, I’m my own biggest critic and I feel very lucky to be part of such an exciting time for Australian food.

BS: Who first told you you were good?
AS: My grandma. She saw my interest in food increase as I grew up and she was there with me every step of the way, from giving me the idea of approaching The River House and David Rayner, to support when I was rejected and went back there three days in a row. Now she’s so excited to see how her contribution has guided me to bigger things.

BS: Who was the first person to challenge you?
AS: Tanielle Manylaws, who was the sous chef at The River House. She was the first woman I worked with in a kitchen. She had the perfect balance of making you not want to disappoint her with mistakes, but also encouraging and praising you when you did something right. She had a country mentality and ran a service like no other. She inspired me to be a strong female chef.

BS: Who in the restaurant business did you look up to and why?
*AS: Josh Niland, the owner of Saint Peter. We worked side-by-side and he did the longest hours and hard yards, but still managed to keep the energy in his creativity. He continually evolves and reassesses to make Saint Peter what it is today.

BS: Describe an early fail in your career.
AS: I tried to climb the ranks too quickly. I realised when I was 24 years old and a head chef in Japan. I just wasn't prepared for it. I knew then that I needed more depth of knowledge if I wanted to produce food that I could be proud of. Everyone around me couldn’t understand it when I took lower positions, but I needed to lay stronger foundations for myself. How can you be a good head chef if you don’t know every position in the kitchen?

BS: Once you were on your way, how did you decide what sort of career to have?
AS: I started as a kitchen hand, did my apprenticeship and then after my falter in Japan, I tried to work in positions that expanded my knowledge and increased my confidence. At some point we all have to realise that creativity isn’t always enough and you need to see a kitchen as a part of a business. I want to make great food that people love and then come back for again and again.

BS: What excites you about collaborating?
AS: Bringing something different to the table. It's exciting – in Australia we have some of the best young talent and a great sense of community. I have a running group message with some great chefs that make me laugh no matter how tough the day is. We all collaborate and share stories. You can be comfortable and happy in your own kitchen and then someone can come in with a new challenge or idea and it changes your perspective.

BS: How do you recognise promise in an up-and-coming talent? What are the signs? What advice do you give them?
AS: Someone who’s happy to do the hard yards as well as the highlights. A chef who has a natural talent but respects the work it takes to get it done and make it happen. There’s no value in trying to climb the ranks too early. No matter what position, I teach my team to lead by example, and that starts from the kitchen hand up. We are all willing to chip in, no matter what the position.

BS: What do you know now that you wish you knew then?
AS: That it’s a marathon and not a sprint.