Some of Australia's Best Cheese Comes From a Tiny Island

Terroir explains why two far-flung Australian producers make some of the country’s most delicious cheese. In partnership with Dairy Australia, we take a trip to the secluded King Island Dairy and Dellendale Creamery. 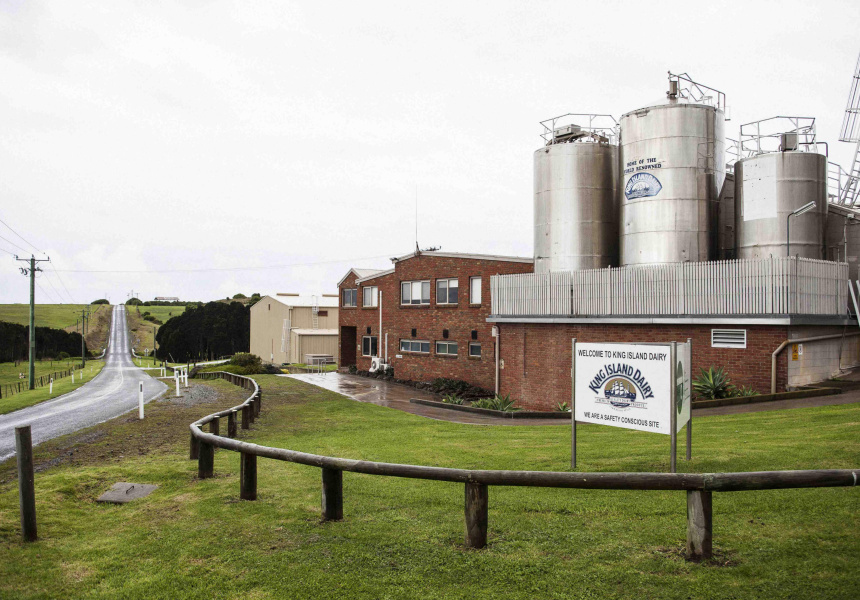 Far from our populous urban centres are remote pockets of farmland that possess precisely the right conditions – or terroir – to create the perfect milk required to make a premium cheese.

Terroir is a French term that describes how environmental factors such as topography, climate and soil composition combine to imbue a product – whether wine or cheese – with unique characteristics and flavour. It’s an alchemy that’s impossible to replicate.

The isolated island is in the path of the Roaring Forties winds that sweep across some southern hemisphere oceans, spraying the island’s verdant pastures with seawater. “The grass is quite salty, and cows just love it,” says Berger, who emigrated to Australia from Switzerland more than 40 years ago. “Salt brings out the sweetness in the milk. I’m a happy man when I see the Roaring Forties blowing.” (The Roaring Forties blue cheese was recently awarded Grand Champion at the Australian Grand Dairy Awards.)

Another vital component of King Island’s terroir is its microclimate. Winters are mild thanks to the warming effect of the surrounding ocean, while sea breezes keep summers cool. These moderate temperatures allow dairy cattle to graze in the paddock year-round. The result is grass-fed milk that is sweet and high in fat – the secret, says Berger, to making good cheese.

“There is very little grain-feeding,” he says. “Grain changes protein quite dramatically. There are 10 or 12 different types of protein in the milk. If cows are grass-fed, we seem to have the right balance. When we grain-feed, the proteins change … which makes the cheese too firm, it doesn’t hold moisture the same way. We’ve seen it a couple of times when we’ve had a very bad drought, which is very rare in our region.”

Like Berger, Chris Vogel from Dellendale Creamery in Western Australia learned the craft of cheesemaking in Switzerland. Vogel, whose Swiss father emigrated to Australia in the ’60s and started a dairy farm in Denmark (WA), travelled to his father’s homeland in 1996. He planned to spend 12 months there learning enough to start making cheese from his dairy herd in Australia. He ended up staying for nearly 10 years, completing an apprenticeship and a degree in cheesemaking.

In 2004, he returned to the family farm at Denmark, located more than 400 kilometres south of Perth on Western Australia’s rugged southern coast. He built a cheese factory on weekends and days off from his day job in the mines and started making cheese in 2011, initially supplying local shops.

Like King Island, Denmark is blessed with terroir suited to producing high-quality milk and cheese. Lush green grass grows throughout winter and spring, and in the drier months of summer farmers feed their herds with silage (‘pickled’ pasture grass) and hay.

Dellendale Creamery – which recently won two nods at the Australian Grand Dairy Awards – sources its milk from a local third-generation dairy farmer who installed a robotic dairy four years ago. “That’s giving us nice, consistent milk coming into the factory to manufacture, as well as we can, a consistent product,” Vogel says. “We don’t have too big of a seasonal variation in the protein and fat in our milk.”

Today, Dellendale produces soft cheeses like camembert and brie, and hard cheeses like the Peaceful Bay Gruyere and Torndirrup Appenzelle. Appenzeller, a specialty Swiss cheese named after a town in Switzerland’s north-east, is a hard cow milk cheese washed with a secret blend of 18 herbs.

“There are only two people in Switzerland who know what that blend is – two guys are assigned with making that product,” says Vogel, who learned to make Appenzeller during his Swiss training. Its aroma, he says, is like a beautiful perfume that infuses the cheese.

Vogel doesn’t want to create a carbon copy of Appenzeller in Australia; instead, he wants to create a distinctly Australian cheese. Dellendale Creamery’s Torndirrup Native Herb is an Appenzeller infused with a blend of three native herbs. “They have amazing flavours and aromas,” he says. “It’s about trying to harness what we have in this country and making something fantastic out of that. That’s really important. The quality of Australian cheese is up there with the rest of the world, and it’s important that we find our own identity.”