Whether it’s rigatoni alla vodka or vodka penne, people are obsessed. It’s the number-one seller at Melbourne’s Capitano (which is made to a controversial recipe), Sydney’s Da Orazio can’t take it off the menu. As it pops up at more places, we explore why it’s beloved – and where to order it. 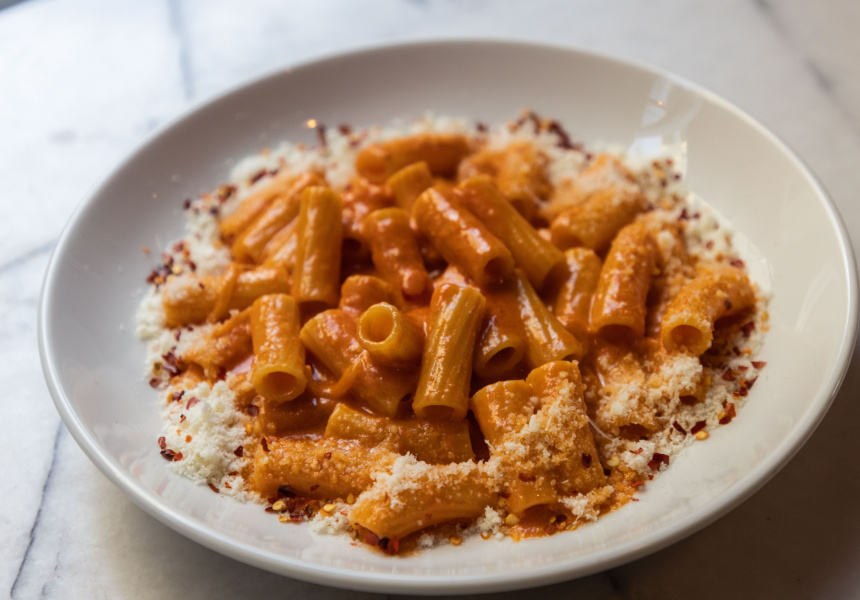 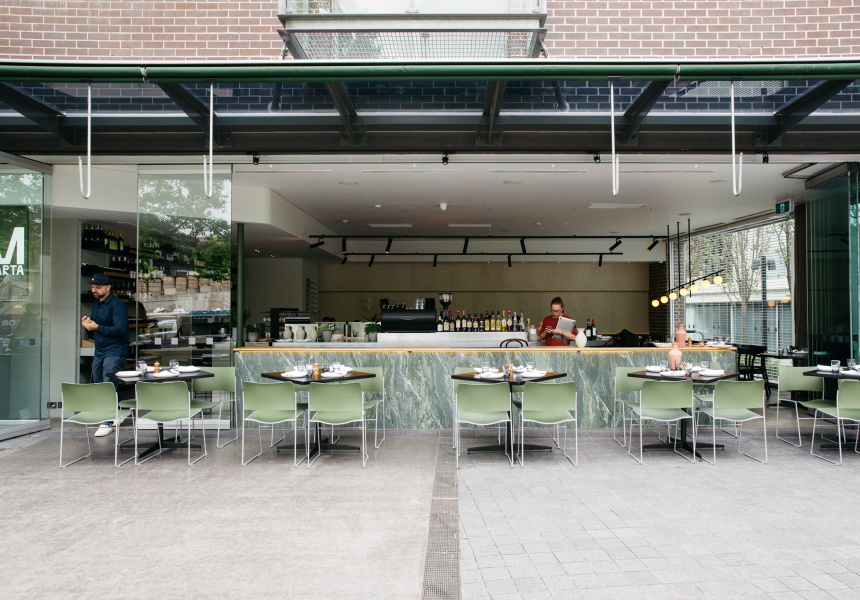 For a home cook, the most intimidating part of cooking vodka pasta is probably the flambé. When chef Orazio D’Elia posted recipes of rigatoni alla vodka on Instagram during Sydney’s first lockdown, he received scores of messages and photos from followers complaining they couldn’t get the vodka to catch alight, or worse, sharing harrowing tales of setting their kitchen on fire.

“When I shared the recipe for rigatoni alla vodka, the engagement was amazing,” he tells Broadsheet. At the time, D’Elia was still involved with Matteo in Sydney’s Double Bay and the CBD, and the recipe posted for home cooks was regularly on the Matteo menu.

“People would email me saying, ‘Chef, how much vodka should I use?’ and ‘Chef, my vodka didn’t flame’. People tagged me in videos of their freaking kitchens on fire, sending me photos of them with bandaids covering their burns.”

Vodka pasta is a simple dish. D’Elia’s version has just nine ingredients: tomato passata, thickened cream, butter, chilli, eschalots, garlic, Parmigiano-Reggiano, vodka and rigatoni (but it could be any pasta shape – vodka pasta can be eaten with whatever you want).

But as is true with all simple recipes, the key is the quality of the ingredients. With only nine components, there’s nowhere to hide the acidity of a cheap passata, or the over-saltiness of Pecorino Romano instead of using a mellower, aged Parmigiano-Reggiano.

The recipe starts with a sofrito of eschalots and chilli, cooked in plenty of butter until soft and golden. About four shots of vodka are added and – this is the dangerous part – the pan is tilted to catch the flame from the gas hob. Once the vodka is mostly cooked off (but not all), the heat is extinguished, and passata and then cream are added. Once the pasta is cooked, it’s combined with the sauce and the mixture is stirred vigorously to coat every noodle. Then comes Parmigiano-Reggiano and more stirring. The result is a dish that is glossy, creamy and utterly comforting.

The origins of vodka rigatoni, which came into popularity in the late 1970s and early ’80s, are uncertain. Some food historians attribute penne alla vodka to a restaurant, called Dante’s, in the northern Italian city of Bologna. Others credit an American for the recipe. There are also variations that suggest Russian origins. Twenty years ago, at a five-star hotel in Milan, D’Elia cooked tagliolini alla perestroika (another version is called penne alla moscovita or muscovite penne), which has a vodka-based sauce and is finished with caviar.

For chef Casey Wall of Melbourne’s Capitano, vodka penne was a fixture of his childhood growing up in North Carolina, eating in Italian-American restaurants. “Vodka sauce was something I loved to eat as a kid. I didn’t have a favourite place to eat it; it was everywhere, and I always got it. It’s really comforting, and I think that’s probably why it’s so popular.”

Wall says Capitano has had pasta with vodka sauce on the menu since opening in 2018 and, although the dish has been around for at least 40 years, it seems to be having a renaissance. It’s popped up on menus at Italian eateries across Australia, from Totti’s in Sydney to Wines of While in Perth.

At Capitano, vodka pasta remains its biggest seller. “We’re not a very big place, and we’ll serve 70 to 100 portions a night. Almost every table will order it.”

For D’Elia, his recipe is so popular there was an uproar when it disappeared from his Instagram story highlights (it’s now back). When he opened his new Sydney restaurant, Bondi’s Da Orazio earlier this year, he knew he had to include it on the menu, even though he’s got a bit of a love-hate relationship with the dish.

“Rigatoni alla vodka – it’s killing my life,” he joked to Broadsheet in March when one of his chefs walked past carrying the key ingredient, vodka. “I used to do it as a special at Matteo, and people loved it so much, when I opened Da Orazio I knew I had to make it. I think I’d get killed if I took it off the menu,” he says, laughing.

But what’s the appeal? Flavio Carnevale from Sydney’s Marta (which is serving it as part of the winter menu) reckons there are two factors. “Firstly, it includes vodka. I think the ‘naughty’ factor of alcohol being in a pasta dish makes it sound fun and makes people curious to try. And then there’s the simplicity of it being pasta, vodka, cream. These are everyday ingredients that are easy to find but result in a delicious end product.”

D’Elia agrees, but has a three-point theory. “One: people just love vodka (if you know me I only drink vodka, fresh lime and soda). Two: I think they love the gimmick of the fire when the vodka is poured into the sauce – it's very theatrical and makes the cooking fun. And three: its enduring appeal is that it’s the perfect combination of spicy and cheesy, and, overall, it’s absolutely delicious.”

That’s definitely the case at Capitano. Many versions of the dish that appear in restaurants or in recipes for home cooks follow the essence of D’Elia’s recipe, but there are more complex versions, such as Wall’s.

“It looks super simple on the plate, but it’s three different sauces to make the one [sauce],” he says. “We start with a lightly cooked, seasoned tomato base, and we have a compound butter we use to emulsify the sauce, and an onion cream we use to build everything together. We slow [the cooking] down, which adds depth to the dish, giving a good umami foundation that balances the sweetness, cream and butter.”

Although the dish is called tortiglioni vodka sauce, Wall – perhaps controversially – doesn’t use any vodka. “When we were doing our research, and tasting it, we didn’t think vodka added anything to the dish. It’s not like anyone drinks vodka because it tastes good; it’s kind of like a nothing spirit. I’m adamant that if you taste ours side by side [with a vodka-based sauce] pasta, ours will have a different depth, and you can’t taste the vodka [in the other] version.”

Some people reckon vodka helps the cream meld with the tomato base, making the sauce a cohesive texture, but if, like Wall, you’re getting that flavour another way, adding the spirit might be unnecessary.

At Totti’s, Mike Eggert says they make their version using fresh egg-dough pasta (for a mix of pasta shapes) and lobster – and it’s always popular. Asked if he has a theory on why it’s so loved, he says, “It’s a real party dish. And I think the vodka adds a fresh cut-through to what might otherwise be a heavy sauce. Except if the vodka is cooked out, which often it is, then that flavour profile is lost. We spritz the pasta at the end with fresh vodka for that mini-face slap.”

Watching D’Elia cook the dish, it seems that the simplest iteration of vodka pasta should be a cinch to make. He’s encouraging of beginners and urges home cooks not to be put off by early failed attempts. “When you cook a recipe, the first time it might not be right, but you need to try again so you get to the point where you’re making a good one. It’s about practice. Never let yourself down by only trying to make a dish once and giving up if it doesn’t come out right.”

Where to eat vodka pasta:

Perth
Wines of While