Winter calls for sippable spirits to warm you from the inside. Here are five to try, including a peach-flavoured aperitif and a Tasmanian coffee liqueur. 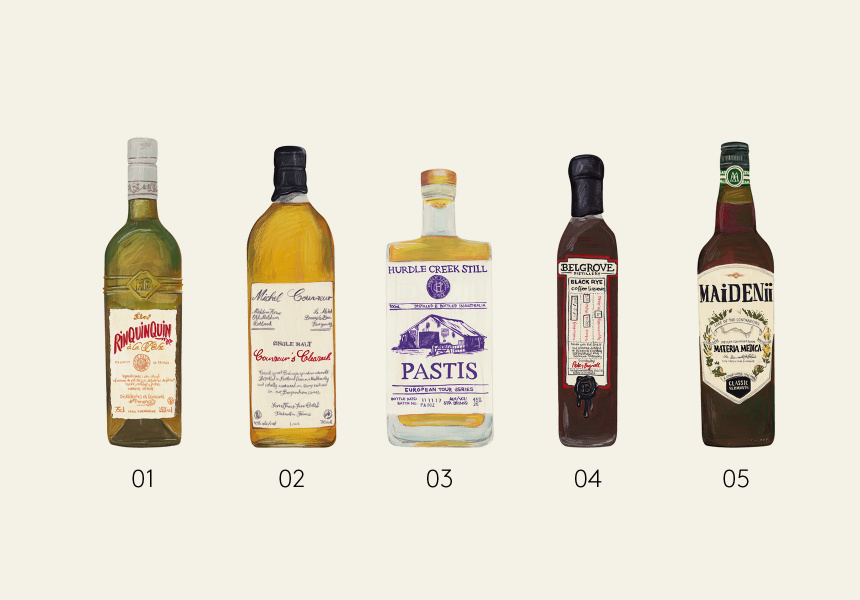 The main question I get asked in my universe of drinks is, “What’s the best wine?” I generally reply, “Well, that depends on time of year, situation, what I’m eating (or not), who I’m with, time of day and what I feel like.” This answers little but does expand the conversation. Perhaps the second most asked question is, “What’s in your liquor cabinet?”, which has an elaborate but more finite answer.

My cabinet is pretty extensive, weird and eclectic, but it does have some solid baselines of classic things just about everyone should keep. There’s a bedrock of gin, from London dry styles to more diverse examples; lots of single malts (a Glaswegian father predetermined that); loads of amaros and vermouths (probably my favourites are herbal/bitter things); a slew of mezcals; some nice bourbons; a few weird things from Eastern Europe (that’s my Slovakian mother’s side); and usually lonely bottles of vodka, triple sec, Chambord and a shitty sweet schnapps (party time!).

That being said, I like to collect high quality and lesser-sung things, the unusual and the curious, with an Australian distillates bent. Here are some of my latest additions and staples:

1. Distillerie Rinquinquin a la pêche, France ($46) – This isn’t anything new, but I’m having a renaissance with it. Made from three kinds of peaches and peach leaves, it’s an insanely refreshing, gently sweet aperitif-style drink best served over rocks. Perpetual summer in a glass.

4. Belgrove Distillery black-rye coffee liqueur, Tasmania ($60) – Belgrove is arguably my top Australian distillery. Its owner is Pete Bignell, one of the cleverest drink producers in the land. Closed-loop production, paddock-to-bottle in some instances and a perfect Kahlua switch-out for my White Russians. What can’t Belgrove do?

5. Maidenii classic vermouth, Victoria ($48) – Okay, so nothing new here – nothing revolutionary per se – but I like the idea of supporting local vermouth (fortified wine with added aromatics), and this classic, from the crew that pretty much put Australian versions on the map, does the job in cocktails and is a wicked sipper on its own. A staple in my cabinet. Fragrant, fresh-feeling, good.