A Guide to Five Traditional Chinese Dishes Worth Tracking Down 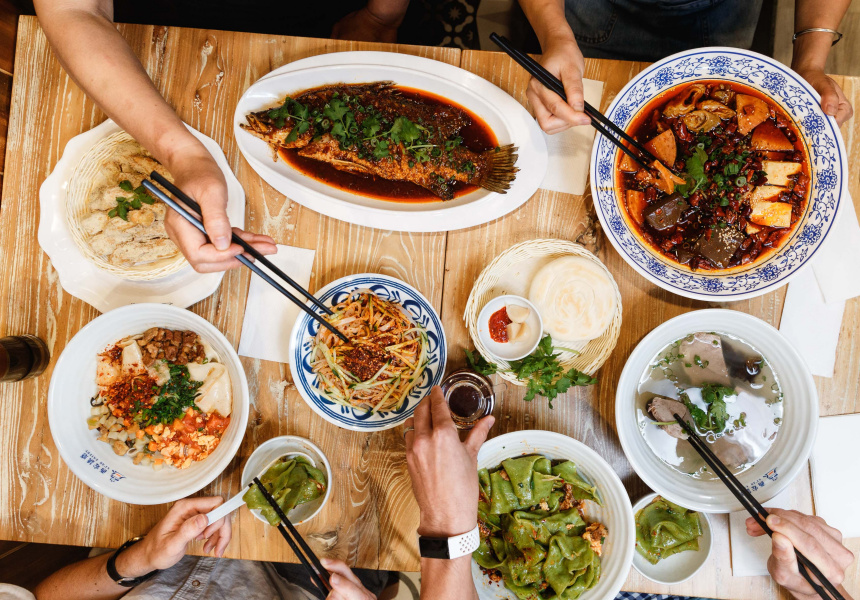 Imagine if all Italian, French and Spanish restaurants in Australia were consolidated and rebranded as “Western European” venues. How would we think about Italian and French food? Well, this is what’s happened to Chinese cuisine in Australia. China is home to more than one billion people, more than 50 ethnic groups, many more languages and a rich history. It is not a country of one cuisine, but many.

The barbecued meats, stir fries, steamed fish and yum chas that have dominated the Australian-Chinese food scene are based on southern styles. Further west in China you’ll find more elaborate recipes full of spice, fermented beans and tongue-numbing peppercorns. In the north-west the fare is heartier and simpler – lots of bread, pulled noodles and influences from Central Asia and the Middle East.

On Wednesday June 24, Uber Eats is celebrating Chinese food and its many iterations, as part of its Your Local Food Fest. Running from June 18 to 30, Your Local Food Fest is offering daily promotions, specials and deals on 13 different cuisines over 13 days, as well as celebrating the venues and talent behind them. All promotions are being funded by Uber Eats to encourage diners to support local businesses.

We put together a guide to some great Chinese options to search for beyond the basics.

Tudou si (stir-fried shredded potatoes)
From the name alone, this may sound simple. Almost every culture has a fried potato dish of some kind. But what makes tudou si so remarkable is the texture. The potatoes are first shredded or julienned, then soaked in cold water, dried and lightly fried with garlic, ginger and – depending on the region – dried chilli or Sichuan peppercorns (or both). The resulting translucent strands are tender but crunchy – it’s a bit like biting into a strand of pickled carrot or a piece of slightly under-ripe melon. You won’t find this on many Cantonese restaurant menus, but it’s pretty much a staple at Sichuan and northern-leaning eateries.

Jian bing (crepes)
According to the dish’s origin story, the third-century military strategist Zhuge Liang worried about his troops being able to feed themselves without woks. So he ordered the cooks to mix water and wheat flour, spread it over a shield and cook it over a flame. The soldiers loved it and won their next battle – so the story goes – and jian bing was born. These days they’re cooked on a grill, topped with pretty much whatever you want, folded a few times and eaten (usually) as a crepe-package on the street. In Beijing, a jian bing hub, it’s an extremely popular breakfast food and can be ordered with a ridiculous amount of toppings – eggs, meat, pickles, herbs, vegies, various sauces, you name it.

Sheng jian bao (pan-fried pork buns)
There are two famous Shanghainese dumplings: silky xiao long bao (which are filled with pork broth) and sheng jian bao – the doughier, crispy-bottomed kind that are pan-fried and typically filled with pork. Somehow, xiao long bao has penetrated public consciousness in Australia, while shen jian bao remains relatively unknown. A shame, as not only is it one of the most beloved dumplings in Shanghai, it’s a textural sensation: intensely crunchy base, slightly doughy exterior and succulent pork filling.

Suan cai yu (Sichuan fish stew)
This is another specialty dish that’s overshadowed by a locally well-known dish, in this case shui zhu yu (water boiled fish) – poached fish served in a spiced broth and seasoned at the last minute with a hot splash of spicy oil. Suan cai yu is much the same, but with a tart broth based on pickled vegetables instead. Likely invented in the ’80s or ’90s, suan cai yu’s lack of fame outside of China can probaly be attributed to its relative youth. But either way, the sour fish stew is incredibly popular – not just in Sichuan but throughout China – and it’s becoming easier to find in Australia.

On Wednesday June 24, Uber Eats celebrates Chinese cuisine as part of its Your Local Food Fest. Running from June 18 to 30, Your Local Food Fest is offering daily promotions, specials and deals on 13 different cuisines over 13 days, as well as celebrating the venues and talent behind them.