Tips, Tricks and Trade Secrets by Top Australian Chefs for Perfecting the Chicken Schnitzel at Home

The route to nailing a schnitty is a series of small, simple decisions, according to our experts. Here’s how to avoid Sog City and get a crunchy golden hue – or, if you prefer to outsource the task, where to eat the best around the country. 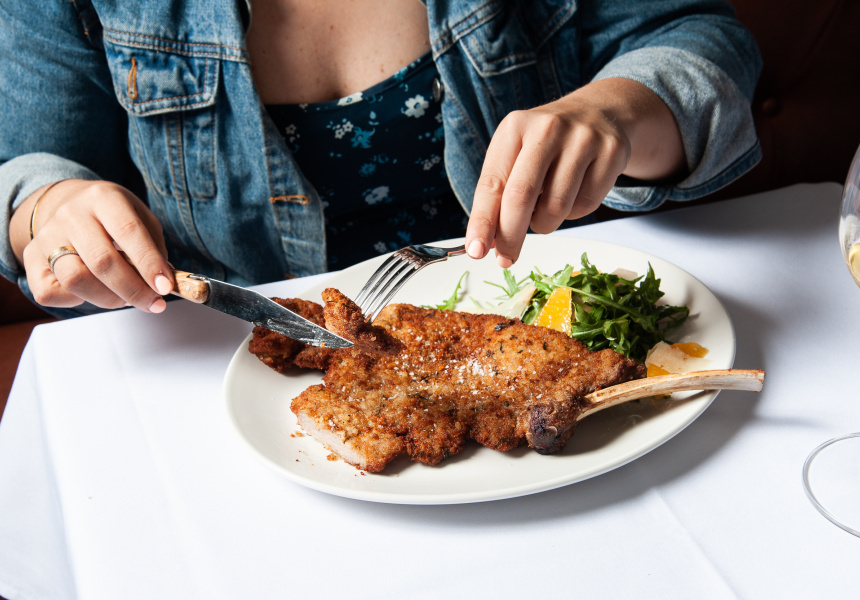 It might present as just a crumbed chicken breast, fried til golden, but for many Australians, the chicken schnitzel is far more than a meal – it’s a part of our national identity.

Though its etymology and origins are European, “getting a schnitty” has become an Australian catchcry and a call-to-arms for a communion at the pub.

So popular is the chicken schnitzel that when Sydney’s Unicorn Hotel reopened after Covid-19 restrictions were lightened, the venue sold 250 of its celebrated schnitzels – which are made using a wing-on chicken supreme cut – in a week, despite being allowed only 10 diners at a time.

Of course, the schnitzel is more than just a pub favourite. The cotoletta, an Italian variation, regularly appears on menus in venues like Alberto’s Lounge in Sydney and Café Di Stasio in Melbourne. Even famed Copenhagen restaurant Noma, during its legendary Sydney pop-up in 2016, included an abalone schnitzel on its degustation menu as a nod to our national dish.

While that breadcrumb crust might conceal any number of proteins or vegetables – veal, pork, eggplant and celeriac are all popular – there’s simply no doubting our love of the chicken schnitty.

And, while it’s available at practically every pub and sandwich shop across the nation, it’s pretty satisfying to nail the dish in your own kitchen. That’s why we asked the people behind two of the country’s most popular chicken schnitzels to share their advice for perfecting this golden-hued poultry treasure at home. These are their top tips.

Brine and bang
“The route to the perfect schnitty is a series of small, simple decisions,” says Jake Smyth, one of the people behind The Unicorn Hotel’s superlative schnitzel. “For example, popping [the chicken breast] into a simple six per cent brine for a few hours will add extra moisture.”

A brine is simply salty water that helps season and flavour the meat and make sure it retains moisture. Lean meat like chicken particularly benefits from this process, as cooking results in moisture evaporation. To make a brine, Smyth suggests mixing one litre of water with 60 grams of salt.

The next step, he says, is to “bang the fucking thing”.

“Whacking at [the chicken fillet] until it’s an even 1.5cm thick,” he explains, “will ensure one part doesn’t overcook while the other retains a terrifying shade of pink.”

Scott Stevenson, whose schnitzel at Melbourne’s Marquis of Lorne is equally legendary, has similar, if gentler advice. “Gently tap the thicker part of the chicken breast with a meat mallet or wine bottle to get an even thickness and cooking time.”

The right crumbs
When it comes to your chicken’s coating, both Smyth and Stevenson recommend using panko breadcrumbs, which are made from white bread without any crust and come in flakes rather than crumbs. “They hold a great texture,” says Stevenson.

“Those golden little crunch bombs create a crust that is not replicable,” Smyth agrees. “Fuck sourdough, and keep those old-school crumbs for a crumbed lamb chop.”

The heat is on
While a home cook is more likely to shallow-fry their schnitty, a pub has a commercial deep-fryer at its disposal, but Smyth says it’s the temperature of the oil rather than the cookware that counts. “One-hundred-and-sixty-five degrees Celsius is the number. Lower and you’re in Sog City. Too high and you’ve got a burnt exterior and that terrifying pink blush that looks good on beef but terrible on chicken.”

Stevenson utilises another common kitchen appliance to help avoid the medium-rare chicken nightmare. “We fry the schnitzel until it’s golden, then finish in an oven at 180 degrees Celsius.”

Sides hustle
“Unless you’re a fucking creep and plan to stick the schnitzel in a sandwich,” Smyth says, “then accoutrements are essential.”

While most pubs offer an obligatory choice of chips and salad or steamed vegetables, The Unicorn leans into the rib-sticking comfort of a couple of winter favourites. “A butter-laden mash and proper gravy are the only sides worth considering.”

Although Stevenson agrees that “the accompaniments are key”, he prefers to serve his schnitzel with a wedge of lemon, a mound of coleslaw and a salsa verde of lime zest, parsley, mint and capers. “I like something fresh and zesty to cut through the richness.”

If you prefer to outsource the task
Easy as this advice may be to follow, there’s no replicating a truly great pub schnitzel. And with restrictions easing across Australia and pubs slowly reopening both their kitchens and their beer gardens, there’s never been a better time to put the call out, rally some mates and grab a schnitty together – whether it’s veal, chicken, pork or vego. Do it for your country.