Soft, bite-sized and weirdly nostalgic, despite their elevated fillings – we can see just why crustless white-bread sandwiches have become so popular in restaurants and wine bars across the country. Here are seven of the best right now. 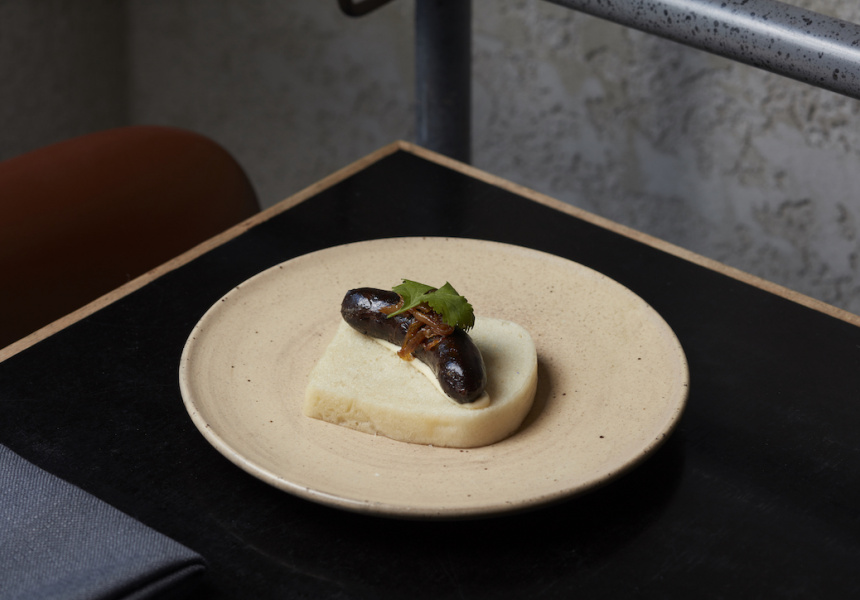 Abalone katsu sandwich, Bulldog sauce
Andrew McConnell, the canny chef who’s been steering Melbourne’s culinary zeitgeist since 2002, has long understood the appeal of the two(ish)-ingredient sandwich. His most famous example is New England lobster on a brioche roll, but this little underdog is catching up. Ironically, the fancy-pants abalone contributes more texture than taste. Ditto for the cabbage. You’re really here for a light slap around the tastebuds courtesy of vinegary, kinda-barbeque-y Bulldog-brand tonkatsu sauce.

Blood sausage sanga
Sorry New South Welshpersons, but you can’t make a sandwich using a single slice of bread. You just can’t. The correct name for this little beauty – according to literally everyone else in Australia – would be “blood sausage in bread”. But beyond the name we can’t fault chef Mat Lindsay’s clever take on the Bunnings bestseller. Part one: a slice of steamed, bao-like white bread. Part two: a woodfired snag of pork-belly mince, pork blood, rice and pine nuts.

Tea sandwich
“Nothing but net” is how Broadsheet’s Max Veenhuyzen once described these slim fingers of roasted chicken skin, flat-leaf parsley and chilli mayo. And that’s without mentioning the little ramekin of roasted peri-peri chicken drippings supplied for your dunking pleasure. Surely even Queen Lizzie would be happy to ditch her cucumber sandwiches for afternoon tea with Africola’s brash South African-born chef, Duncan Welgemoed.

Pig’s head and green mustard sanga
This innocuous-looking sandwich comes with a verbal warning from the staff. Bite into the pig’s head, pork belly and caper croquette too vigorously and you’re liable to cop an eyeful of the steaming chicken jus that’s percolating inside the panko-encrusted ball. The white rounds touched up with peppery green mustard-leaf mayo are mostly here for convenience, protecting even the clumsiest eaters among us from transferring oily fingerprints to their wineglasses.

Mortadella sandwich with red wine vinegar, green olive and herb bath
Ah, Jock Zonfrillo: the Scottish- born, Adelaide-based chef who’s championed our native foods more than any other non- Indigenous person on the planet (yes, even Ben Shewry). And he has proper hand-waving Sicilian heritage, too. We couldn’t make this stuff up. At the casual counterpart to his fine diner Orana, the chef serves Bologna’s famous pink, wobbly, pork-y luncheon meat with a puck- ering vinegar and olive dipping “bath”. It’s less populist than its crumbed and fried peers, but no less delicious.

Katsu sando: pork schnitzel sandwich, coleslaw and kimchi crisps
Thick panko-crumbed pork loin. Kewpie mayo. More of that zingy Bulldog sauce. This sandwich was never not going to make friends with vast swathes of Sydney. And yet, even the team at Paper Bird must be surprised how much it’s taken off. At the end of October the restaurant halted the weekend brunches this sandwich was the star of. Thankfully, that’s not the end of it – it’s simply been transferred to a twice-weekly lunch service on Friday and Saturday. Also, the kimchi chips? Genius.

As of February 15, 2019 this sandwich has been replaced by a chicken katsu version, featuring chicken schnitzel, chips, pickles and salad.

Lobster katsu sando, salted cabbage, dill slaw
Contrast is the crustless sandwich’s whole schtick: bland meets sharp; soft meets firm; highbrow meets low. Chef Nathan Lastevec has extended that idea to aesthetics, too. On a black plate, on a black table, in Hôntô’s dim surrounds, these luminous oblongs are practically a beacon saying, “Eat Me”. The dill slaw adds a herbaceous glow to each mouthful, rather than the vinegar-y twang of the other two katsu numbers.

This article was updated on February 15, 2019. Menu items may have changed since publication.