The Ironclad Pan Company creates sustainable, stylish cookware that’s made to last. And each piece is poured by hand at a foundry in Australia or Aotearoa. 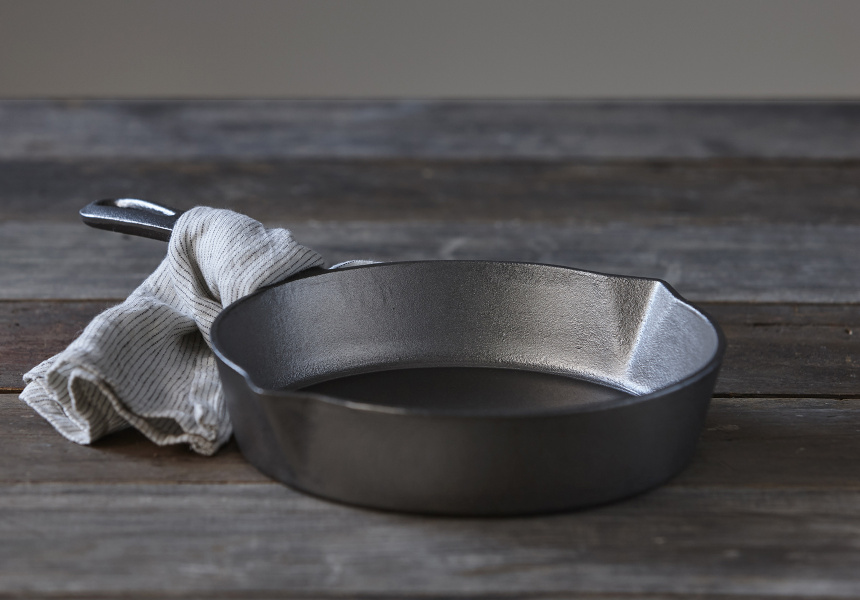 There’s growing support for the “buy less, buy better” approach – and while you’d hope that a new piece of clothing or household purchase would last at least a few years, how about buying something that promises to hold fast for three generations?

That’s the guarantee of cast-iron cookware business The Ironclad Pan Company, which designs its pieces to be used three times a day, every day, for 100 years. It even has a century-long warranty – that promises to replace your pan if it should “warp, crack, or lose its integrity in any way” – cast into the underside of the iron itself.

Originally founded and made in Aotearoa (The Ironclad Pan Co’s pieces are hand-poured at Auckland foundry Skellerns), the company has now launched in Australia – and in keeping with the team’s sustainable, locally made ethos, it works with a Sydney-based foundry for the Australian production line.

The company was launched in 2019 by Auckland’s Kate Slavin, her husband Levi Slavin and their business partner Joe Carter. A graphic designer by trade, Kate met Levi in the advertising world. Being creative-minded people, they were constantly coming up with what she describes as “a lot of un-produced ideas”.

The idea for The Ironclad Pan Co arose – where else? – in the kitchen, while Kate (who loves to cook) was using a set of pans that Levi’s family had handed down to them. “We were like, ‘It would be so fun to build a story around a product and have a go at making something tangible,’” she says.

They also wanted to create a product that was “good for the planet and good for you”. The downsides of non-stick pans have been well-documented, and while cooking with them can seem more convenient, they’re more disposable and worse for the environment.

Cast-iron pans and cookware, when cared for properly, are practically non-stick and can be used between the stovetop and the oven with ease. They also get better over time through repeated use and “seasoning” (a protective layer of oil that becomes baked into the pan’s surface through cooking) – another bonus in a world full of disposable items.

The first pan the company released in 2019, after about six months of development, was the original 28-centimetre Legacy Pan. “It was a pretty soft launch, we weren’t shouting about it to start with”, says Kate. “It was pretty nerve-racking because we were all so new to the world.”

In 2020, the founders’ close friend Felicity Morgan-Rhind joined the company. A film director, Morgan-Rhind also trained as a chef and worked under New Zealand celebrity chef Peter Gordon. She’s in charge of creating the recipes that sit on the website, showing people that using a cast-iron pan is about so much more than frying a steak.

“Because of her inspirational and aspirational abilities, it was really exciting to see things like incredible desserts with roasted pears and chocolate, and all the amazing variety of cuisine that you don’t [traditionally] associate with cast iron.”

Crossing the ditch was a natural progression, as a large customer base in Australia had already been ordering the product. About half the leadership team is Australian, too – Kate’s husband Levi is based in Sydney, and her brother-in-law Nic Bastian (the company’s Australian lead and CFO) is in Perth.

The pans are poured at Ajax Foundry in Sydney, a family-owned iron engineer that has over 80 years of experience in the industry. “In moving to the Australian market, we wanted to make sure that we honoured our sustainability, which is one of the core values. We didn’t want to make a whole bunch of products here [in New Zealand] and not support local [craftspeople]”.

Coming up, the team is focusing on the still-new Australian expansion, and Kate has a list of new products she’s starting to design. The Ironclad Pan Co recently launched a Dutch oven and there are some new accessories to come. “We have a great community and we get a lot of requests for various things. I try to listen to those people, and it looks like we’re going to be making a larger pan – and probably a grill.”

She describes herself as a perfectionist when it comes to every new design. “It has to be right though. Because we stand by the product and put our names to it and want it to last for those generations, it has to be right.”