You can now order Impossible Beef at Grill’d restaurants across the country, plus at Butter in Sydney. Is it the satisfying and delicious substitute for meat we’ve been promised? 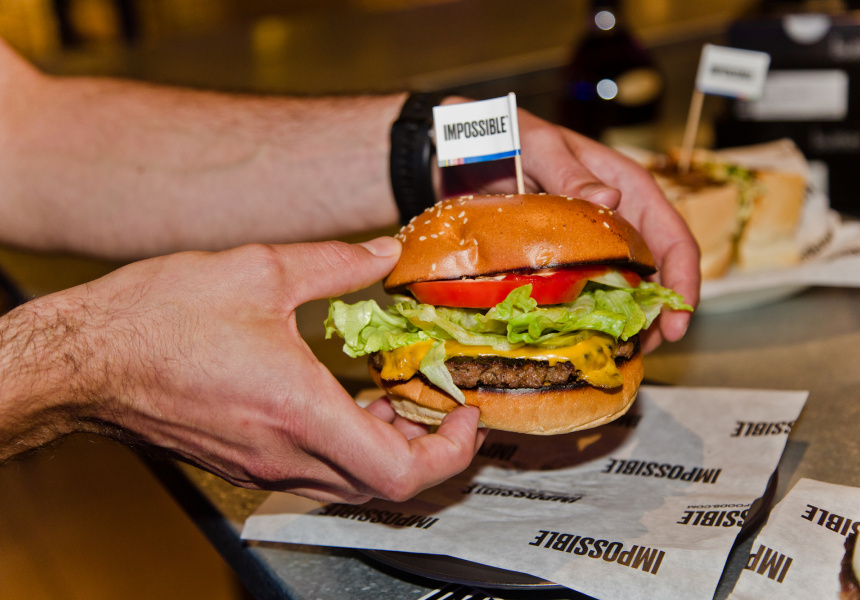 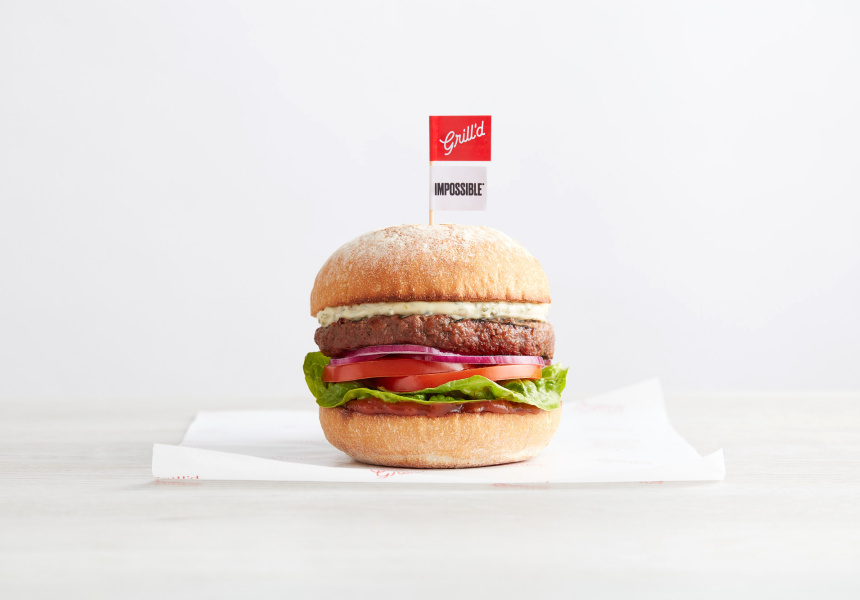 Impossible Beef is made to look, cook and taste like beef. You might know it as the fake meat that bleeds. Or as the highest ranked meatless burger in The New York Times 2019 taste test. Or maybe you’ve come across it via celebrity supporters Katy Perry, Jay Z or Serena Williams, who love it so much they’ve invested in the company’s soy-based, plant-engineered alternative meat. If you haven’t heard of Impossible Foods yet, it’s safe to say you’ll become a lot more familiar with the California company’s name as Impossible has finally launched its flagship product in Australia – available at more than 150 restaurants across the country.

“It’s aimed at meat-eaters. It’s to add to your diet. It’s not aimed at vegos or vegans,” says Julian Cincotta, owner of Butter in Sydney, which has added Impossible Beef to its menu at its Chatswood and Parramatta venues (with an Impossible Foods pop-up in the works for later this month). “It is so damn tasty. It tastes like beef. I’ve tried it on a few buns and it tastes a bit like a Macca’s cheeseburger, but a more gourmet meat product.”

What sets Impossible apart from other veggie patties or vegetable-packed foods is that it uses heme – an essential molecule found in every living plant and animal. It’s a component of an oxygen-carrying molecule also present in blood, which is what makes it taste so much like beef.

“It cooks just like meat; it cooks very quickly,” says Cincotta. “We’re making a medium-sized patty, cooked medium-rare. If you do it thicker it has a bloodiness to it, from the heme, which after it’s fermented looks like blood. People think it’s beetroot juice but it’s not. I’ve used it for bolognese, stir-fried noodles, fried katsu, and I want to make pies with it, too.”

Broadsheet was one of the first offered a bite of an Impossible Cheeseburger at Butter in Chatswood. The patty was seared and caramelised, with a slightly sweet flavour. Biting into it delivered the same fattiness and juicy flavours you’d expect from a beef burger with a truly convincing tender, fall-apart texture. With Butter’s sauce, cheese, pickles, onion, tomato sauce and American mustard, it was also a finger-licking mess that we’d absolutely eat again.

It’s taken years for Impossible, which launched its first burger in the US in 2016, to come to Australia. Its founder Patrick O Brown, a professor of biochemistry at Stanford University, wanted to create morish meat products from plants that could effectively replace the need for farming cows and ultimately reduce the environmental impact of rearing animals for human consumption.

Though its soybean-based heme is fermented with genetically engineered yeast, and the company has been criticised for testing its products on animals, the pinkness of the patty when cooked medium-rare is similar to what you see on a medium-rare steak. Vegans might find other options more appealing, such as mushroom burgers or a patty made from mushrooms, like Fable’s patties, or Beyond Meat’s pea and rice protein variety.

“We take a very different approach than other plant-based meat companies, starting with understanding the basic building blocks of what makes meat so delicious,” says Nick Halla, senior vice president (who was also Impossible Foods’ first employee). “This has enabled us to develop products that allow consumers to have the same experience as when they eat conventional meat from animals, without sacrificing anything they love about meat.”

Halla is overseeing the company’s expansion to Australia and New Zealand – its third international market launch in 14 months. At the moment, you can access Impossible Beef at more than 100 Grill’d restaurants across the country and at two Butter restaurants, with more retail offerings to be confirmed later.

“We balance multiple factors when determining which product to launch first,” says Halla. “Starting with environmental urgency and market fit … We want to roll out products that replace the most urgent threats to our planet’s ecosystems … Beef production has, by far, the biggest environmental impact of all animal products.”

He tells Broadsheet it’s also a meat we use across so many foods in Australia. “Ground beef is entwined in Aussie cooking culture. Beef is versatile and a well-loved ingredient for staple dishes like minces, chilli, burgers and meat pies, and the centrepiece for cultural pastimes like barbeques and roasts.”

Cincotta says his mum has made lasagne with it, and his aunty has made meatballs. He’s also launching a range of at-home meals, including a meatball sub. And later in November, Butter will also open an Impossible Pop-Up in The Rocks, Sydney, featuring a menu made exclusively from Impossible Beef.

Grill’d will be offering four takes on an Impossible Beef burger, which will be added to its already extensive plant-based range. Simon Crowe, founder and managing director of Grill’d, said he was thrilled to be the first national group in Australia to add the faux meat to its menu. “Impossible Beef is the natural next step for Grill’d in our mission to challenge the status quo with innovative, healthy and sustainable products,” he said in a statement.

So, how healthy are they? Each Impossible Beef product contains no animal hormones or antibiotics, and it packs the same protein per serve as if you were eating beef from cows. There’s also 4.2mg of iron in each patty, and mock meat is considered healthier than processed meat, which has been linked to heart disease, cancer and diabetes.

At the moment, Cincotta’s decision to introduce Impossible Beef to his menus comes at a cost. Though it has a far lower environmental footprint than conventional meat – 96 per cent less land, 87 per cent less water and 89 per cent fewer greenhouse gas emissions compared to beef from cows produced in the US – it’s more expensive than beef from cows.

“Right now our product is typically priced slightly higher than conventional ground beef, and typically in line with the price of a premium cut of beef like grass-fed or organic,” Impossible says in a statement.

“Our intention is to continue to lower our prices until we undercut the price of conventional, commodity ground beef from cows.”

So, if you see burgers selling for the same price as beef, you’ll know why. But maybe it’s the price we need to pay to help our planet.

This article was published on November 4, 2021. Some menu items may have changed since publication.