The Taste of Art: Inside the NGV Gala Celebration Menu

Momofuku Seiobo’s superstar chef, Paul Carmichael, is creating a menu fit for Haring and Basquiat at this year’s NGV Gala Celebration. In partnership with NGV, we hear the story behind the menu. 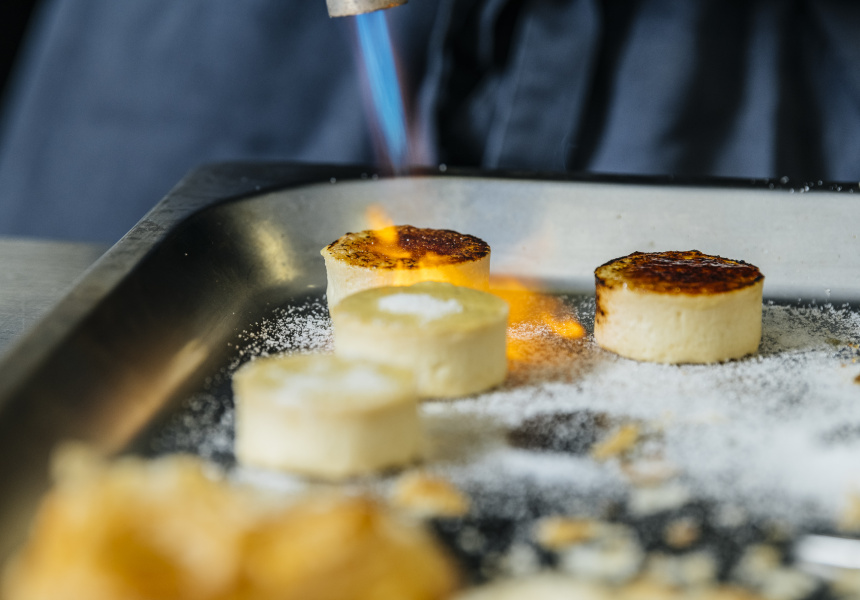 Paul Carmichael, executive chef at Sydney’s Momofuku Seiobo, reckons chefs and artists are naturally drawn to each other. “We’ve got lots of chefs that are definitely attracted to the art world,” he says. “The worlds are both very small and generally, [the] people [from both] tend to connect with one another.”

Carmichael, whose first cooking experiences were in Barbados before moving through world-class kitchens such as Wd-50, Aquavit, Asiate, and the Tasting Room in New York City, has been thinking a lot about the connection between food and art. This year, he’s the main attraction at the NGV Gala Celebration, where he’s creating 15 dishes to accompany the work of Jean-Michel Basquiat and Keith Haring.

When he got the call to create a menu for more than 1000 people, the chef admits he was a little unsettled. “It’s a bit daunting. It’s not like I do this every day,” he says. “I don’t know if you’ve ever cooked for 1500 people? In three days it’s pretty tight. But I wanted to say yes because it was a bit out of my comfort zone. You can learn things from being outside of your comfort zone.”

To ensure his menu hits the mark, Carmichael is tailoring his cuisine to suit the environment. There are two parts to the landmark event: a stand-up gala where the hoi polloi will mingle among the art, and an exclusive sit-down dinner for $2000 a head.

While the extensive menu is still in development, we can tell you what not to expect: Keith Haring-shaped canapés or Basquiat on a plate. “I feel like that would be kitschy and would do a disservice to their art,” Carmichael says, laughing. “The only person who should do a Keith Haring is Keith Haring. His art should live on, but not be copied.”

Instead, Carmichael is taking inspiration from the artists’ milieu: 1980s New York, with a Caribbean inflection. “Basquiat is part-Haitian and part-Puerto Rican. I also lived in New York for a long time, and Haring is Jewish. I think the menu is a mix of things they would have had in New York,” he says. “But I’m still trying to stay true to what we do at Momofuku.”

Carmichael insists that this dinner is not about him. “It’s about people having a good time in that space. That’s all I worry about,” he says. “It’s more about the entire experience of them coming, and the entire production. It’s about being able to be among beautiful art.”

The NGV Gala Celebration is on November 30.