The Spirit of Revolution

Empirical Spirits doesn’t produce whisky, vodka, gin, rum, tequila or any other recognisable type of spirit. The founders – two Noma alumni – are inventing entirely new things. And as of last year, the game-changing range is available in Australia. 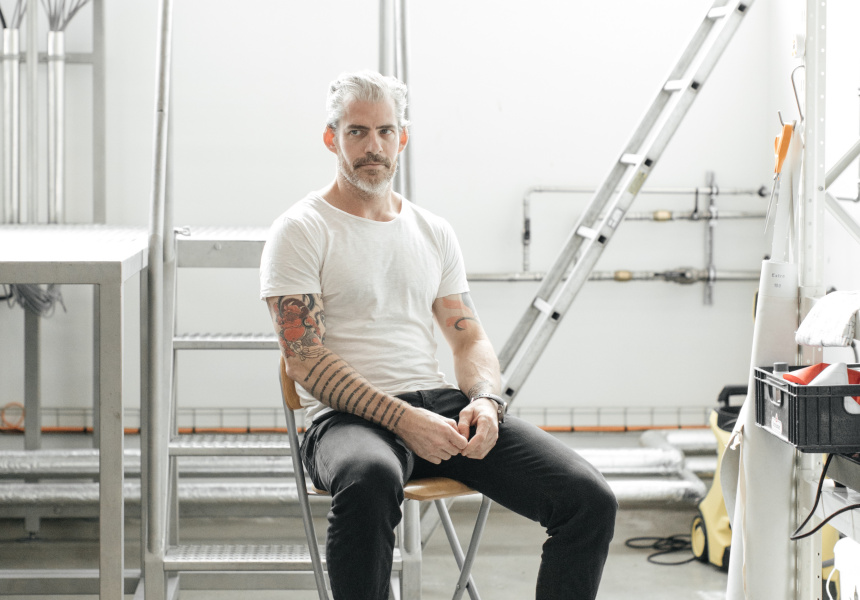 Fuck Trump and His Stupid Fucking Wall. It’s sentiment rich with the spirit of revolution and, thanks to an anarchic distillery in Copenhagen, it’s now a revolutionary spirit too.

Empirical Spirits was founded in 2017 by Lars Williams and Mark Emil Hermansen, who bonded while tinkering with ferments and distillations at Noma’s Nordic Food Lab in Copenhagen.

“I wanted to continue the exploration of flavour,” Williams says of his decision to leave the restaurant after eight years, “so I asked Mark if he wanted to start a distillery. We’d eschewed alcohol fermentations at Noma because it was a whole other beast, so this was a very new endeavour for us.”

The pair, well-trained in avoiding conventional wisdom, began operating out of a 15-square-metre kitchen in Copenhagen’s trendy meatpacking district. They quickly ditched any notions of innovating or reinventing gin, vodka, or any of the other classic spirits, opting to create their own instead. Armed with a batch of koji (the Japanese mould used to ferment sake and soy sauce) and a homemade proof-of-concept pressurised distiller welded together from a pressure cooker, Williams and Hermansen started playing.

What emerged after countless iterations – manipulating grain types, yeast varieties, temperatures, distillation pressures and timeframes – was Helena, Empirical’s mother spirit and a tribute to Lars’s favourite Misfits song. Created by inoculating pearl barley with koji spores, fermenting it again with saison yeast (commonly used to produce Belgian-style beers), then distilling it twice, the 40 per cent ABV spirit contradicts centuries of recognised protocols. Helena has a subtle but distinctly briny, umami character, evoking sake, soju, and soy sauce, and it’s neutral enough to serve as a base for other, more complex, spirits.

The commercial-grade, low-pressure vacuum stills that replaced that prototype pressure cooker allow Empirical to distil at far lower temperatures (five to 30 degrees) than conventional equipment allows, preserving more of the flavour from the grains, yeasts, fruits and other botanicals it uses.

The results, according to Empirical’s Australian distributor, are like nothing anyone’s ever tasted before.

“They’re not comparable to gins or vodkas,” says Ned Brooks of High Hopes. “You have to think really far outside the square to find any comparisons. Nobody’s done anything close to this, because these guys are chefs. They aren’t bound by the same rules.”

Fallen Pony is Helena plus quince skins and black tea. The strained solids are converted into a kombucha, which is added back into the spirit to adjust its ABV down to a restrained 35 per cent. The fruit gives the drink a nostalgic, candy-esque sweetness, and the kombucha a surprising tart sourness.

“I find flavours so compelling for their ability to evoke sense memories in a way your other senses can’t,” Williams says. “When you smell something or taste something you haven’t had since you were five years old, it immediately throws you back into that moment. Success, to me, is when I can share a sense memory even if it’s not a shared memory.

“Every person that tasted Fallen Pony said it tasted like a different candy they had when they were a kid.”

In the golden-hued Ayuuk (43 per cent), smoked pasilla chillies harvested in the Sierra Mixe mountains of Mexico (where they’re called ayuuk) are distilled with kamut, an ancient type of wheat. And the 40 per cent Charlene McGee – a nod to Drew Barrymore’s character in the 1984 movie Firestarter – hums with the flavours and aromas of smoked juniper berries, but tastes nothing like a smoky whisky or a juniper-rich gin.

“The spirits are really well balanced, like a good restaurant dish,” Brooks says. “You’ve got all the things you need for it to be consumable on its own. Acidity, sweetness, texture … they have everything your palate wants.”

Each Empirical product is the result of exhaustive experimentation. The R&D department’s two per cent success rate is a source of pride for Williams.

“If you’re not failing the majority of the time, you’re not really pushing,” he says. “That’s how the creative process works. Sometimes it falls together like manna from the heavens, and sometimes it feels like you’re banging your head against the wall. You just have to keep banging.”

Speaking of walls, there’s that Fuck Trump spirit. Habanero chillies – over a kilogram per bottle – are distilled into the Helena base spirit at 10 degrees, carrying across the floral, fruity aromas and flavours of the fresh chillies, and the eye-wateringly spicy capsaicin component. The relatively low-alcohol spirit (27 per cent ABV) is levelled out with habanero vinegar, resulting in a balanced and entirely unique drink that Brooks says is good with watermelon juice or dribbled over a freshly-shucked oyster.

“Although the spirits are quite intellectual,” Brooks says, “They’re not insisting that they only be blended in cocktails that cost $45 at top bars – you should be able to drink them at home.

“It’s the democratisation of everything they did at Noma.”

The Empirical Spirits range retails for $88–$110 per 500-millilitre bottle.