Specialty Instant Coffee Is Here. How Does That Work, Exactly?

It often tastes like caffeinated gravel and hits you like a faceplant. But Australian roaster St ALi and America’s Voilà have an instant product that promises the flavour of cafe-brewed, filter-style coffee with a just-add-water process. 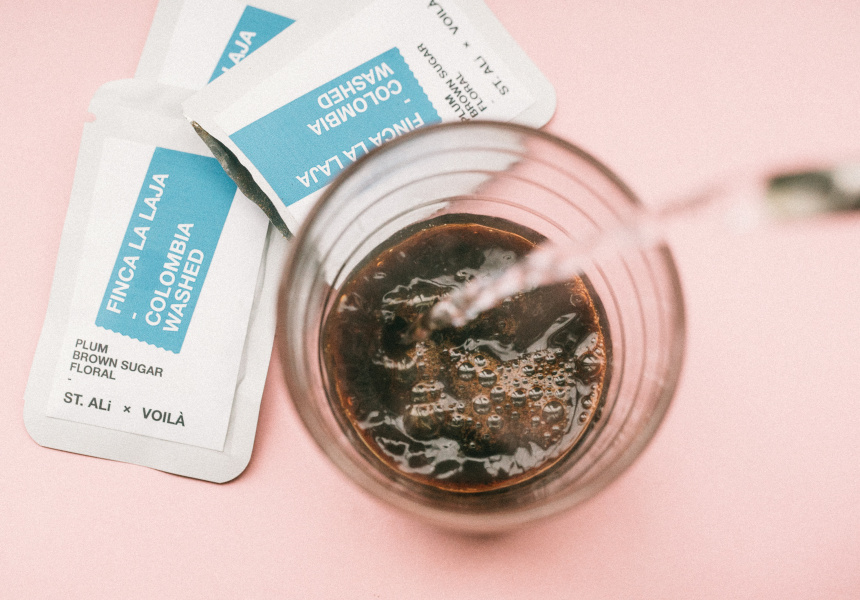 The reason instant coffee often tastes like scrapings from the inside of your oven is it starts out as a poor-quality (read: cheap) raw product. Some companies also introduce additives to augment or simulate flavours. Then there’s the murkiness around sourcing practices and ethics – two contentious keynotes of contemporary coffee discourse – that arises when brands scoop up massive quantities of beans at low prices.

Voilà is doing things differently. It’s an instant-coffee manufacturer using 100 per cent traceable, specialty-grade coffee – beans that score 85-plus points on the SCAA scale, an industry benchmark – from start to finish. The company uses a freeze-drying method, which is one of two common methods in the instant industry.

Founder Kent Sheridan explains it as “pouring brewed (or pre-extracted) coffee onto slabs that are refrigerated to sub-zero temperatures. Then, with the use of a vacuum chamber” and some fancy physics, “the water is slowly removed from the frozen slabs, leaving soluble coffee crystals”. He reckons he’s onto something, and is keeping the all-important brewing recipe under wraps.

Voilà is not a coffee roaster. Instead, it partners with roasters from around America and now, the world. In 2018, Sheridan and Melbourne-based roaster St ALi and its founder Salvatore Malatesta collaborated to release Finca La Laja, a coffee sourced from James Fernandez’s five-hectare plantation in Colombia’s El Tambo region. It presents with tasting notes of plum, brown sugar and florals.

At $16 for 25 grams (five by five-gram sachets), it won’t upend the bulk-buy supermarket competition. But, even at that price point, this first release sold out in just three days.

It marks St ALi’s first foray into a specialty-grade instant coffee. “We’re early adopters of anything we think is new and cool,” Malatesta says. “We decided that a collaboration with those guys was a must.”

“It follows on the molecular movement,” he adds. “Chefs like Heston [Blumenthal] have been dehydrating things for years.” Dehydration intensifies flavour and extends the life of a product.

Broadsheet had to see if the hype was true. We did an in-house flavour comparison, pitting Voilà' Finca La Laja against a couple of the big names in the instant business. It was the clear winner, with a flavour comparable to a pour over, but not quite the game-changer we’d hoped for.

“What you miss out on, what we haven’t replicated yet, is the bouquet,” Malatesta says.

There’s also a quality to the body that's distinctly instant – a flatness that misses out on the juiciness of a filter or espresso. So while Voilà will likely win best on ground against direct competition, a well-made pour-over will beat it for flavour and subtlety every time.

It also looks very, very different to other instant coffee products. But that's a good thing.

“The problem with instant coffee is that it’s ugly – ugly and disgusting,” Malatesta says.

There’s no denying that instant coffee is screaming for an image makeover, and Voilà has given it one with its slick, recyclable packaging and flip-top box.

St ALi has just released its second collaboration with Voilà, the Feel Good Instant coffee. The new product is based on its 100 per cent certified organic Feel Good blend that it has been producing for the past two years. It's available in a 22g box holding five sachets, and retails for $21. It's available online and in-store from July 8.