2020 was a new dawn for alcohol-free beer, which is getting closer and closer to its alcoholic counterpart in terms of taste, body and mouthfeel. Last year we introduced you to 13 great examples. Now try these 16 new entries, spanning strawberry-lime gose, pilsner, hazy IPA, golden ale and more. 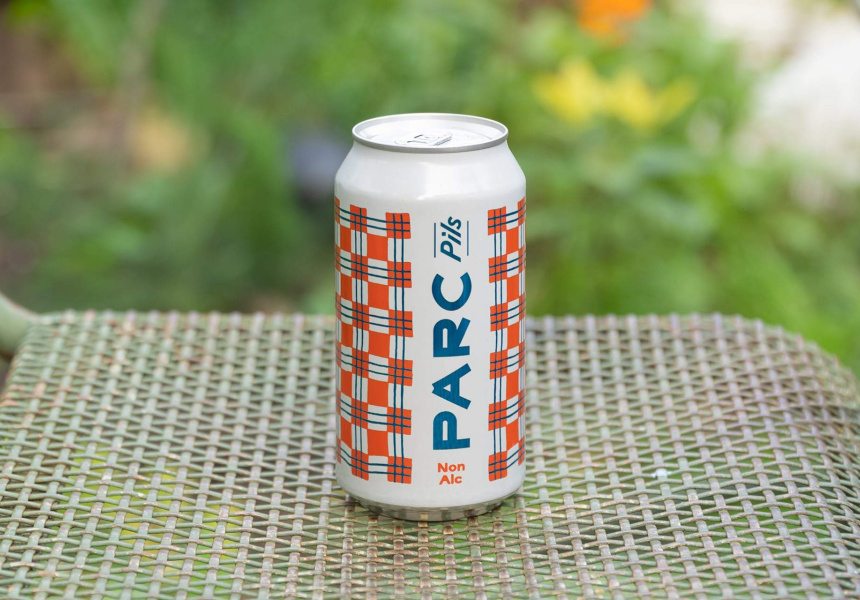 Heard the news? Non-alcoholic beer is actually good now. The first 13 to the craft market showed us alcohol-free beers can have decent body and mouthfeel. They just need a little help from grains such as wheat, rye and oats, and/or non-fermentable sugars like lactose and maltodextrin.

And where the non-alcoholic shelf was once filled with nothing but bland European lagers, there are now sours, IPAs, XPAs, pale ales and stouts to choose from.

Here are 16 great new options, all introduced since our previous article was published. Who knows where we’ll be in another six or 12 months’ time? 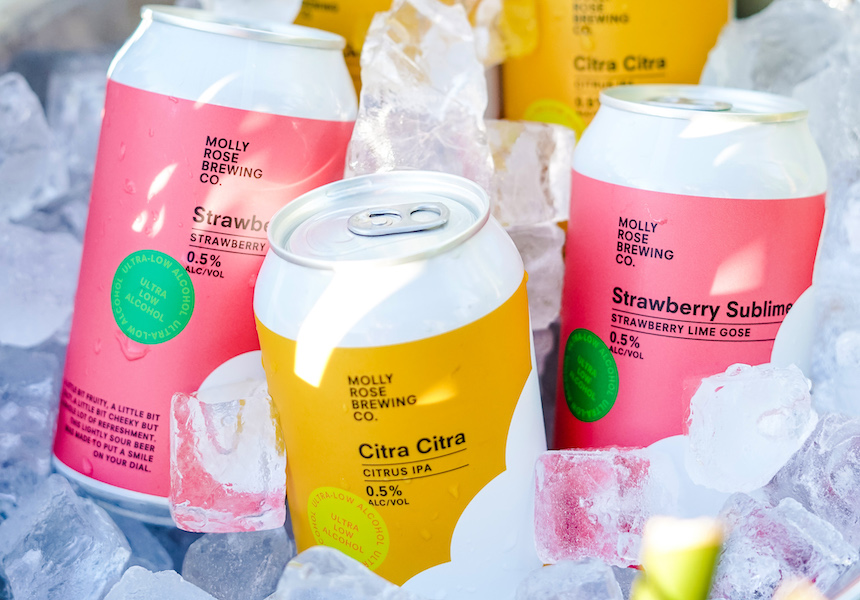 Alongside breweries such as Wildflower and Boatrocker, Melbourne’s Molly Rose makes some of the most interesting and consistent sour beers in the country. So it’s fitting that this delicate strawberry-lime gose, released earlier this month, is Australia’s first non-alcoholic sour. Originating in Germany, gose (which rhymes with dozer) is a drinkable style with a mild, salty-sour finish, like if you added a pinch of salt to yoghurt. This one is balanced with a hint of citrusy sweetness, courtesy of real strawberries and limes.

Molly Rose Citra Citra
Released alongside the Strawberry Sublime, this brew contains real oranges and plenty of Citra, one of the great hop varieties of the modern age. In bitterness and overall vibe it’s an IPA, but that orange-y tang is reminiscent of a Belgian witbier like Hoegaarden, albeit much more drinkable.
Strawberry Sublime and Citra Citra are available online and at independent bottle shops. 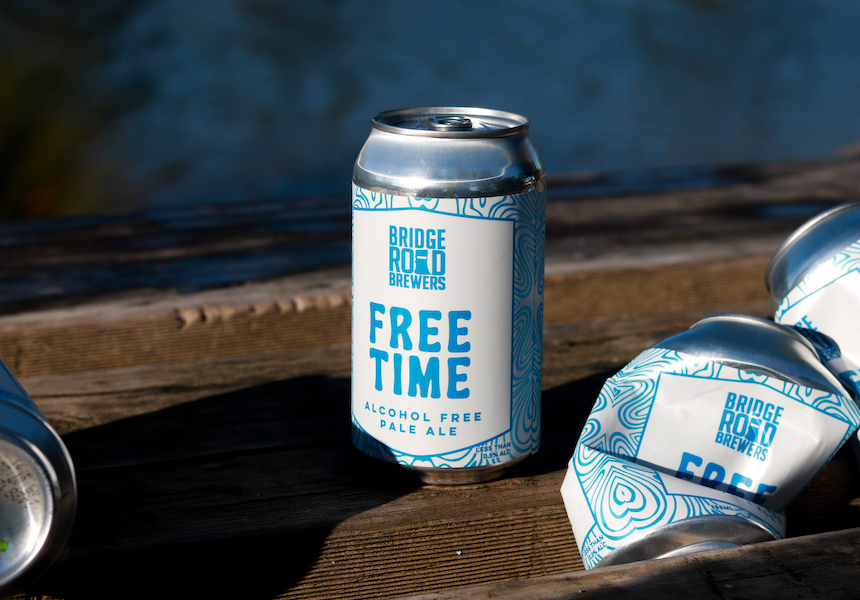 From his Little Bling Session IPA to his Robust Porter, Bridge Road founder Ben Kraus long ago proved he can master any style of beer. This only slightly bitter pale ale – his first alcohol-free release – is no exception. It pours a pleasant straw colour and gives off mild tropical aromas courtesy of Citra, Simcoe and Enigma hops. The finish? Nice and clean.
Available online and at independent bottle shops. 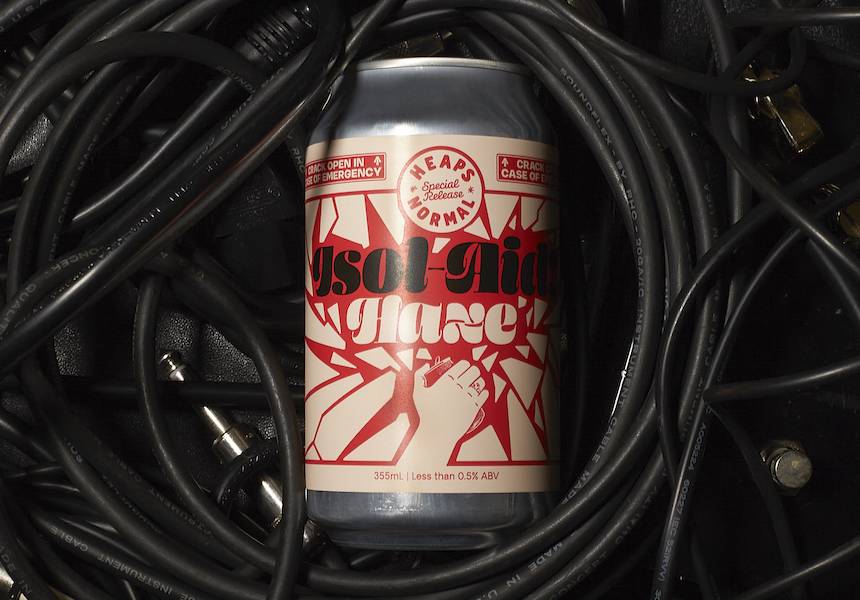 Since launching this time last year, Canberra-based Heaps Normal has made a far, far bigger splash than any other non-alcoholic brewery in the country. Its flagship Quiet XPA is now the bestselling beer of any kind (not just non-alcoholic) at bottle shops across Sydney and Melbourne. The team has nonetheless kept its head pretty low product-wise, releasing only this limited-edition hazy IPA in collaboration with Isol-Aid festival and Melbourne retailer Blackhearts and Sparrows. It’s good. There’s a big, fruit-driven hop nose, and the generous, pillowy mouthfeel that’s made hazy IPAs the most popular craft beer style in the world of late.
Available online and at independent bottle shops. 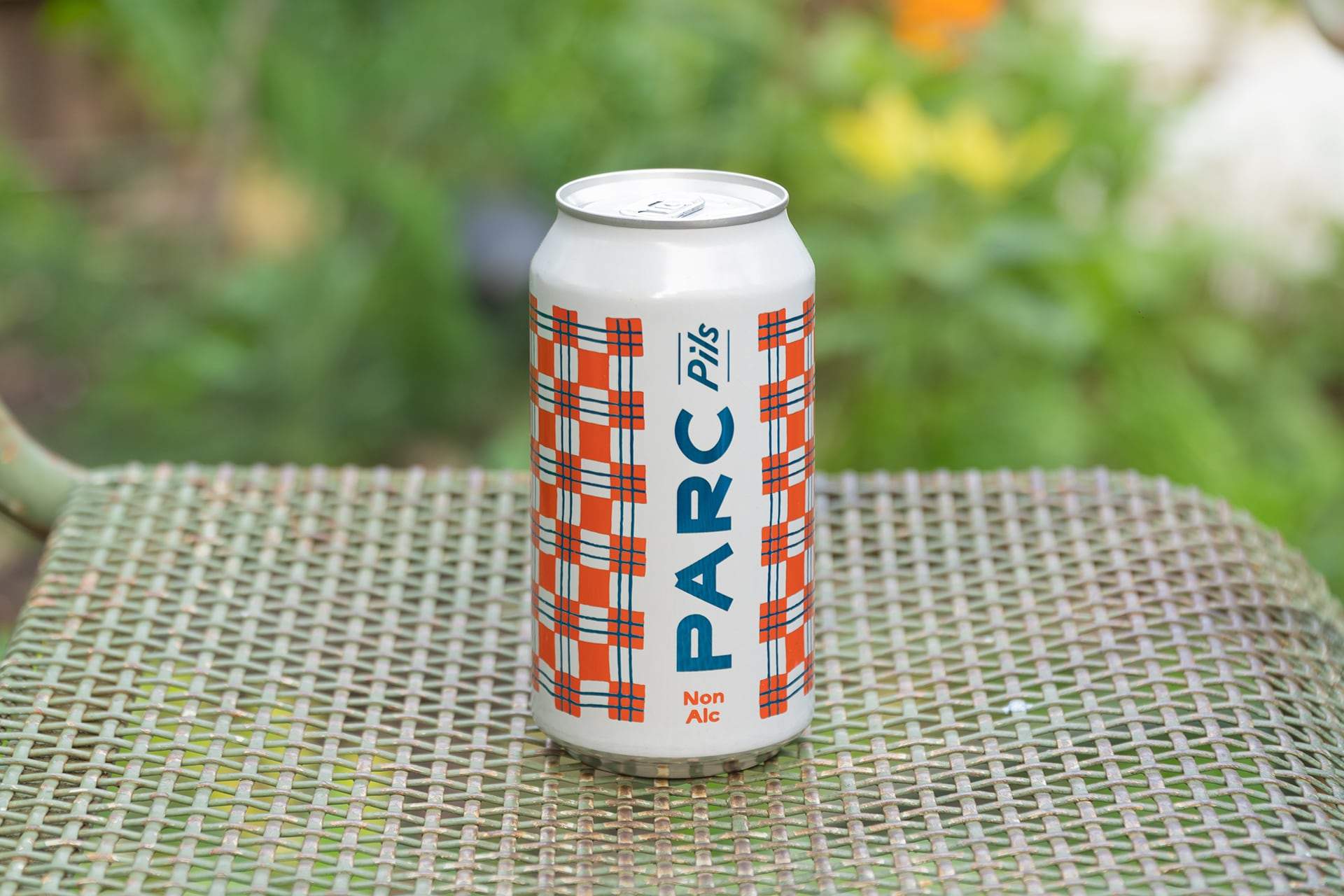 Under the Monceau label, Alan Caras brews some truly excellent pét-nat kombucha (seriously, go and try it – it tastes like fizzy wine, but has less than 1 per cent alcohol). Now the Melburnian has set his sights on non-alcoholic beer, with this new brand dedicated to pilsner. With an ultra-clean taste and the lingering bitterness of Czech Saaz hops, this is as classic and non-craft as they come – apart from the lack of alcohol. Picnics, here we come.
Available online. 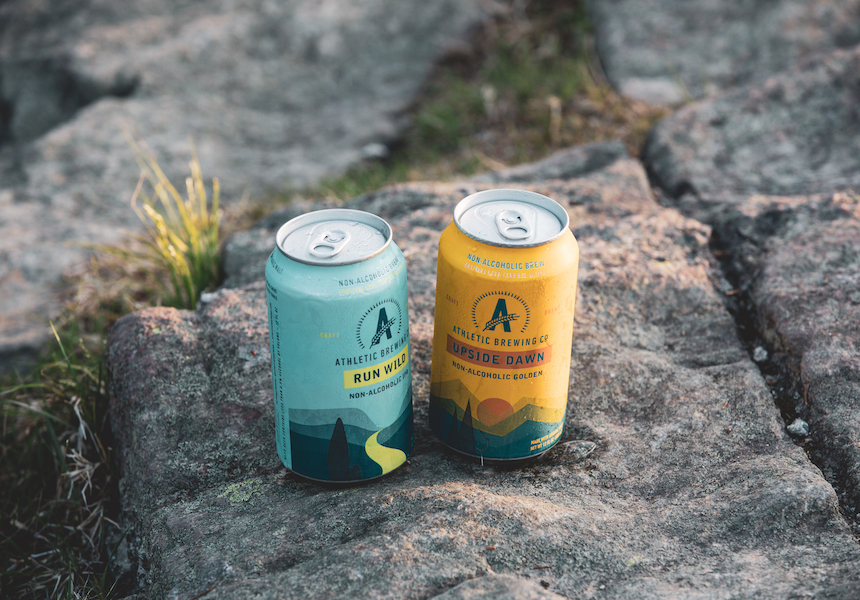 Founded in 2017, Athletic is the United States’ first entirely non-alcoholic brewery. And in all likelihood, the world’s. It launched in Australia in June, with two of its five core beers. This mid-weight golden ale is filled out nicely with the help of oats and wheat, while on the hops front you’ll find a mix of American and English flowers that balance New World exuberance with Old World refinement. Expect notes of citrus and stone fruit.

Athletic Brewing Run Wild IPA
Athletic’s other beer is the one beer nerds will want to form a long-term relationship with. Combining Citra, Mosaic and three other Pacific Northwest hop varieties, this West Coast IPA pops with pine-y, citrusy characters. It’s a match for any other hop bomb on the market, but a certain restraint keeps it sessionable. You’ll easily put away three or four in front of the TV on a Friday night.
Upside Dawn and Run Wild are available online and at selected Woolworths stores. 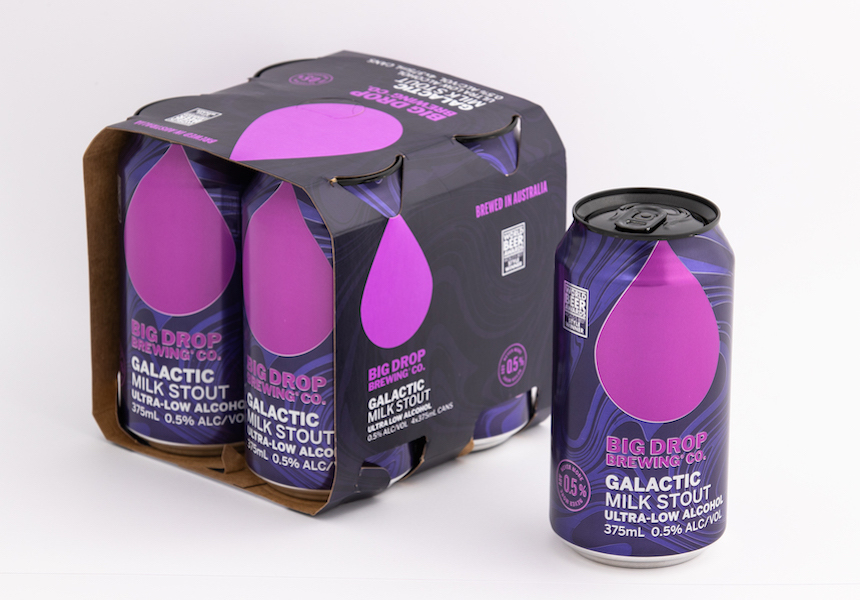 This UK-based entirely non-alcoholic brewery is expanding rapidly across the world, contract-brewing locally in order to cut costs and increase freshness. Its lager and pale ale became available here last year, and this stout followed just in time for winter. It’s only the second alcohol-free stout in Australia, after Upflow’s. Body is the aim of the game here. Barley, oats and rye complete the stacked grain bill, while cocoa nibs and lactose (the “milk” in milk stout) impart a smooth, dark chocolate mouthfeel.
Available online, at Dan Murphy’s and BWS. At the 2018 Winter Olympics German brewery Krombacher sent 3500 litres of non-alcoholic beer to the country’s athletes. Turns out, the stuff contains a whole range of beneficial compounds that aid recovery after exercise. Melbourne’s Upflow has leaned into that angle with two new hypotonic “active” or “sports” beers, which contain sodium, magnesium and potassium salts. Brewed exclusively from wheat, this one is mealier than you might expect from a lager, and finishes with a Citra-driven punch.

Upflow Hypotonic Classic Pale Ale
Only four hop varieties in the world are classed as “noble”. All four originate on the Czech-German border and give the region’s lagers and pilsners their distinctive and oft-revered tastes. Upflow’s second active beer pairs two of these four classic hops with biscuit-y malt for a beer that’s balanced and drinkable, with mild herby, floral notes rather than the out-and-out fruit of New World hops. Chug it down after a run.
Upflow Beers are available online. This active beer company has just one beer for now: this “electrolyte-enhanced” pale ale, brewed at Victoria’s Holgate Brewhouse and directly inspired by similar products in Germany. Made exclusively with Australian hops, it aims to refresh above all. Another one for slamming down post-workout.
Available online. 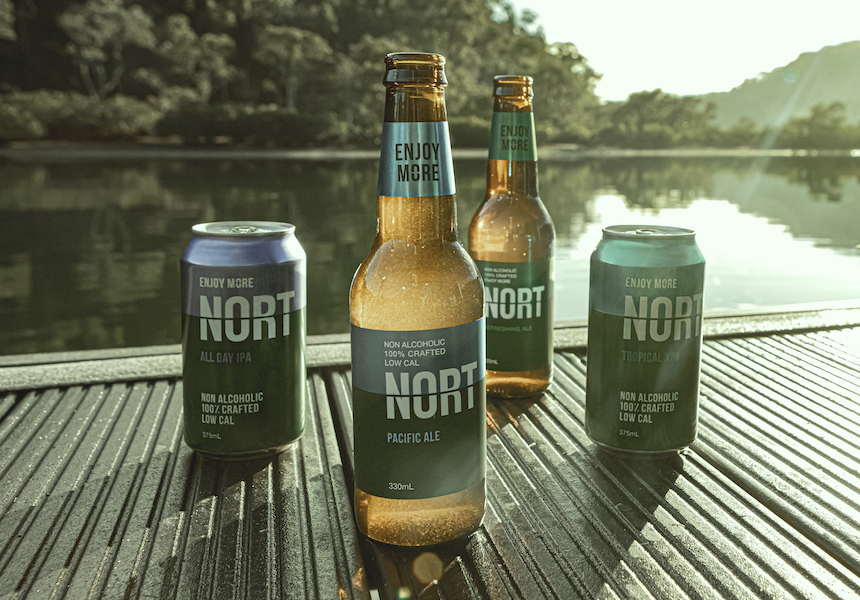 Jaz Wearin is the co-founder of the respected Modus Operandi brewery, on Sydney’s Northern Beaches. Last year she launched a new non-alcoholic label, Nort, with a single crisp ale in the line-up. Now she’s really committed to the cause, with three new beers this year. Like Athletic’s IPA, this one stands up to its alcoholic counterparts, with vivid citrus and grapefruit hop characters.

Nort Pacific Ale
To simplify a long story, pacific ale is an Australian beer style invented by Stone & Wood. It’s characterised by generous use of wheat and late dry-hopping to add buckets of flavour and aroma – tropical, usually – but relatively little bitterness. And that’s what you’re in for here. Sans booze, of course. Perfect for the beach, or a beach-adjacent beer garden.

Nort Tropical XPA
XPA, or extra pale ale, finds the middle ground between the easy-drinking pale ale and the more bitter and heavily hopped India pale ale. This one is redolent of mango, pineapple and citrus and pours with a slight haze.
Nort beers are available online, at Dan Murphy's and BWS. This is touted as an American-style pale ale, but in practice it drinks more like a German kolsch. Like the Parc Pils, it’s super-clean, with only the mildest hop flavour. For maximum satisfaction, drink ice-cold on scorching hot days.
Available online and at independent bottle shops. Tinnies, brewed in Victoria, is Coles’s in-house beer label. There are six beers in the range, including this citrusy, piney pale ale. If you enjoy Australian Sports Brewing Co’s pale ale, this may also be up your alley.
Available at First Choice Liquor. 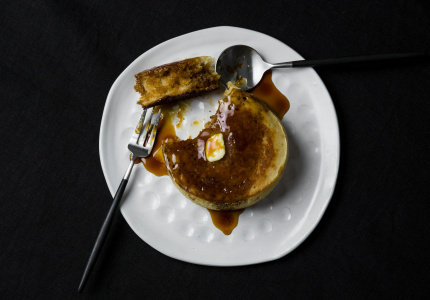 This Vodka Is Flavoured With Two Types Of Native Yam