Produced by Broadsheet in partnership with Diageo World Class.

Want to make cocktails, but missing the basics? Andrea Gualdi has got you covered. In partnership with Diageo World Class, the award-winning bartender behind Sydney’s Maybe Sammy recommends the essential spirits for your cupboard bar – and exactly what you can do with them. We might not be able to retreat to our favourite bars at the moment, but making cocktails at home has never been easier, thanks to mail-order spirits and a wealth of tutorials online. And lockdown means that you don’t have to feel embarrassed about your hotchpotch collection of glassware and insufficient shakers and strainers.

“You can improvise,” says Andrea Gualdi, whose intimate Sydney cocktail haven Maybe Sammy, was the only Australian venue included on last year’s World’s 50 Best Bars list – and was also named the Best Bar in Australasia. “You can shake drinks with a little marmalade jar or whatever you have at home. And if you want to make your own ice, you can fill up a water balloon and leave it in the freezer, then break the plastic off and have this beautiful ice ball for your cocktail.”

That’s right: the Italian-born cocktail master once named the best bartender in all of Australia has just given us the green light to make ice out of water balloons. He’s similarly laidback about glassware, sanctioning any glass available – as long as you heed the proportions of ingredients.

Named after Rat Pack icon Sammy Davis Jr, Maybe Sammy is of course closed to the public at the moment, but the bar’s online shop is still slinging signature cocktails (including The Sammy, The Frank and The Dean) as well as house-roasted coffee personally sourced from a coffee farmer in Costa Rica. As for how Gualdi is spending his newfound time away at him, his partner has been keeping him busy on the bartending front. “My girlfriend forces me to make her a different cocktail every day,” he says with a laugh.

We asked Gualdi to single out six of his favourite base spirits, along with suggestions on what to do with them at home.

Tequila
Whether slinging margaritas or sipping it straight, Gualdi turns to bartender’s favourite Don Julio Blanco, a tequila with notes of vanilla and citrus that’s bottled without being aged. “I’m a fan of the blanco because it’s easy to play with and is clear in flavour,” he says. All you need for a basic margarita is a good tequila, an orange liqueur like Curacao and fresh lime juice. That said, to update this cocktail classic to modern tastes Gualdi recommends adding a dash of agave syrup to soften the citrus kick.

Gin
For his gin and tonics, Gualdi opts for Tanqueray No. Ten, a citrus-spotlighting variation on the classic Tanqueray London Dry gin, while his favoured tonic is Fever-Tree’s dry and versatile Premium Indian Tonic Water.

“If you want a crisp gin and tonic,” he says, “I would go for a proportion that is no more than one part gin to three parts tonic. As a garnish, you can use pretty much whatever citrus you have lying around. Tanqueray No. Ten is normally served with a slice of grapefruit. The garnish is also an ingredient, so make sure you give a little squeeze to the citrus wedge inside the glass.”

Vodka
Gualdi touts the range of vodka, from highballs to espresso martinis. Whatever the use, he recommends the perennial staple Ketel One vodka and suggests making a juicy watermelon punch with it at home. “It’s just vodka with fresh watermelon, lemon, honey, and a dry sherry,” he says.

After keeping the watermelon cold in the fridge or freezer, blend all the ingredients together. Then strain the blended mix and drink as is. Balance-wise, his general rule for cocktails is three parts spirit, two parts citrus, and one part sugar. For a punch like this, he goes with three parts of the non-alcoholic ingredient but says it’s not essential to measure the watermelon exactly.

Scotch
While he’s happy to drink his preferred Johnnie Walker Black Label as a simple whisky highball with soda, Gualdi is an outspoken devotee of the Penicillin, a cocktail created by Australian bartender Sam Ross during his tenure at world famous Milk and Honey bar in New York. This spiced turn on a Whisky Sour combines fresh lemon, honey, and ginger with Scotch and a tiny shot of peated whisky like Talisker, which gives the finished drink its smoky flavour.

“As a bartender you’re used to tasting spirits, and in cocktails you’re looking for a different type of flavour,” he says. “With the honey and ginger it’s amazing.” Mix some sliced or juiced ginger with two parts honey and one part water, and heat the mixture on the stove until it starts boiling. Then make the drink using 15ml of the honey ginger syrup with 25ml of fresh lemon juice, 50ml of Johnnie Walker and 10ml of Talisker.

Rum
As the months turn colder, dark rum comes out to play in seasonal staples like the Dark and Stormy. One of Gualdi’s favourite rums is the oak-aged Ron Zacapa Centenario 23 from Guatemala. “I like to drink it as an Old Fashioned,” he says, “and usually I don’t even add sugar to it. It’s very rounded and complex. I add 60ml of it with a couple dashes of Angostura bitters and a couple dashes of orange bitters. Serve it over ice, with a little zest of orange.” Cocktails don’t come much simpler than that tried-and-true classic.

Baileys
You might not think of Baileys as being particularly versatile, but Gualdi wields the Irish cream-and-whiskey icon for both a chilled after-dinner sipper and a supple ingredient in desserts like tiramisu. But closest to his heart is pouring it in black coffee, with a half-and-half balance. He doesn’t even mind that it’s not exactly the hippest drink in town.

“How I usually drink it at Maybe Sammy – true story – is in coffee. It’s a bit out of fashion in the bartending community,” he says with a laugh, “but it’s my guilty pleasure.”

This article is produced by Broadsheet in partnership with Diageo World Class. Drink responsibly.

Produced by Broadsheet in partnership with Diageo World Class. Learn more about partner content on Broadsheet. 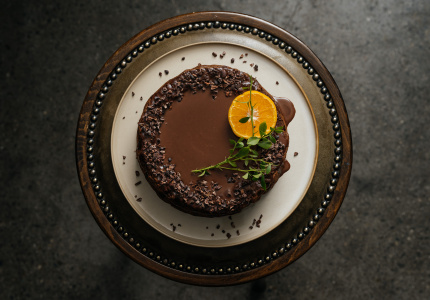 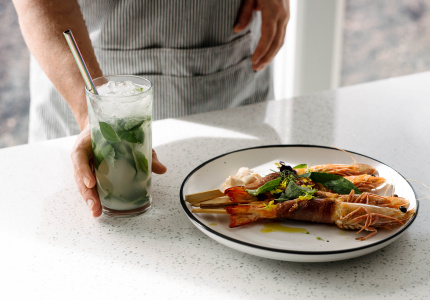