The South Australian population is one of the oldest in the country. I keep hearing the government say that Covid-19 has the potential to overwhelm our nursing homes, hospitals and the health system. The other day, I heard someone say that Meals on Wheels hasn’t had its budget increased for five years, and now they’re under immense amounts of pressure because everyone is self-isolating.

Yesterday, I posted a video on social media suggesting chefs could lend their support to the health system. Thanks to the coronavirus pandemic, there’s a shit ton of chefs all over the country that are ready to volunteer their time. What’s the point of having so many talented young cooks sitting on their hands? Employ us. Give us something to do. I’ve got two restaurants that are currently sitting empty with a bunch of equipment – and a bunch of people who want to help. The chefs of Australia can actually jump in and help.

The government keeps banging on about not wanting to have too many people out of work. Here’s an opportunity to give some people some work, whether its paid or volunteer. I’m happy to volunteer. These [health and aged care] sectors are under so much pressure, surely there’s something people with skills can do.

There are different levels of support. If these places need people to just cut onions and boil carrots, that’s fine. But then you’ve got chefs such as Peter Gilmore (Quay), Dan Hunter (Brae) and Ben Shewry (Attica) – some of the most creative chefs in the country. In the world. Maybe there’s something those people could be doing at a higher level to help design food that’s a little bit more interesting to someone who’s sick. You think about someone that’s got this coronavirus: they’re isolated, they can’t see their family, they’re on their own and they’re eating overcooked corned beef. They could at least be getting some sort of comfort and nutrition through food that’s better than what they’re getting now.

Since posting the video, I’ve received a lot of messages, including lots of emails from chefs saying that if I get this thing off the ground, they’d be happy to help. I also got messages from people saying we should just go to our local nursing home or local Meals on Wheels, but it’s not as simple as just rocking up with a truck full of food. There are dietary requirements. There are health restrictions. There are all sorts of procedures in place to prevent people from getting sick. I’ve had two grandmothers go through nursing homes so I’ve seen this first-hand.

The other aspect to consider is the mental health of those in the hospitality industry. It’s okay at the moment while people are fresh and exhausted from working their arses off for god-knows-how-long and enjoying the rest. But after two weeks of this – especially if restrictions get tighter and tighter – people are going to start going nuts.

You go from a high-intensity industry with a lot of service pressure – chefs and waiters are used to going for beers after work to kill that energy – to basically just doing nothing. There are going to be a lot of people that don’t know what to do. When they don’t know what to do and they’re bored, some pretty dark demons can fester. But a situation where an unemployed chef can take an income from the government in exchange for three days’ of work a week in a nursing home or a hospital: that’s going to give them purpose.

I don’t know what the process would be because I haven’t done this before, but hopefully this message gets sent out far and wide and reaches someone working in a nursing home. Someone who’s a caterer. Someone who’s helping to run Meals on Wheels. Someone who’s a big dog at the government or one of these places that will look at this idea and say: “Alright, yeah, we could use ya. Come on board.” 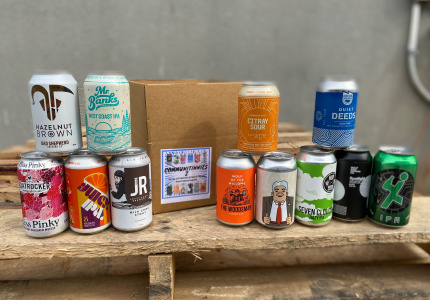