What are they, what do they taste like, and why are they now on menus around Australia? 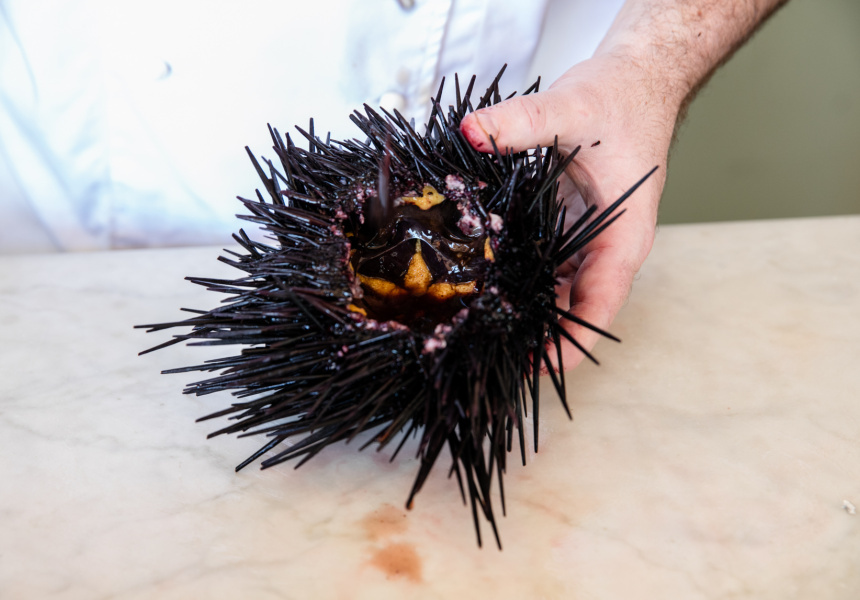 If you’ve ever been diving, you would have most likely seen a sea urchin. The fist-sized, ink-black spheres covered in brightly coloured spines look like exploding stars. Some are as bright as a traffic cone, others a more demure purple and some are as black as their bodies. Either way, they are one of the least edible-looking creatures in the ocean.

But cut one in half and you’ll see five mustard-yellow strands on the inside of its shell, reaching up to the top. These are the creature’s reproductive organs and what you’ll be eating when you order it. If that puts anyone off, read this from John Susman’s Australian Fish and Seafood Cookbook (a biblical text in the Australian food scene): “A freshly shucked sea urchin is one of the great food experiences.” That’s it, no further explanation.

He writes that urchins have been popular in France and Japan (they’re enjoyed in many countries like Italy, Chile and within First Nations communities in New Zealand and the US) for a long time but “in Australia it has only recently become valued as a culinary experience”.

Now urchin is appearing on menus all over Australia under the name urchin roe or uni, its Japanese name (urchin gonads doesn’t quite have the same ring to it). Italian restaurants are stirring them into pasta, fine diners use them in custard, Japanese joints serve as a sashimi dish and one Sydney seafood restaurant simply serves it on a freshly baked crumpet.

That last dish is from Josh Niland, the owner of acclaimed seafood restaurant Saint Peter. “My idea with the sea urchin crumpet is for the urchin to be the butter. It comes with its own sweetness, so [it’s also] the honey.” He serves it raw out of the shell (the flesh is removed, rid of its entrails, cleaned and put back in) with a crumpet and nothing else. The reason he serves it so simply is because urchin is so distinct and enjoyable in both flavour and texture there’s really no point in cooking it, he says. “It's very versatile – anything you can do with butter you can do with sea urchin but when it's raw you get a really true sense of what it actually tastes like.”

Many people describe it like ocean-flavoured butter, rich but not powerful in flavour, creamy but firm and with a distinct briny taste. Niland says, “it's like pure umami, a balance of sweet and savoury, almost like foie gras.”

The quality of an urchin has been traditionally graded on colour, and Susman says the best urchins are “a bright yellow-gold”. For a long time, Australia’s best and brightest urchins were shipped to Japan. Thanks to demand from innovators like Niland, Melbourne-based chefs Andrew McConnell (Supernormal) and Moon Kyung Soo (Kisumé), and many Australian-Japanese chefs, a portion of the bright yellow stars are now reserved for local menus.

To get them at their best, Niland and every other chef committed to serving high-quality urchin needs to receive them live from their supplier. As urchins are shallow-water dwellers and live attached to rocks, coral or the sea floor, you can’t exactly trawl them in and deliver them fresh to the markets. That’s where people like Greg Finn come in. “Basically, I'm a hunter-gatherer in the ocean. I live in Port Stephens with my family and travel most of the NSW coast to work,” he says. “I harvest using a snorkel and surface supplied air (essentially a tube attached to your boat).”

He dives up and down the coast looking for the best abalone and urchins. When he finds them (“consistent quality depends on the ability of the diver to recognise quality feed lines, which support higher yielding urchins – experience is the key”) he detaches them with a hook, bags them and chucks them in a bucket onboard his boat.

As you can imagine, this line of work throws up a few harrowing and incredible experiences. “I have had many highlights as a diver including many glorious sunsets and bitter, terrifying south west wind squalls.” He describes large stingrays attempting to steal abalone, escaping sexual advances from a six-foot carpet shark and seeing a great white eat a baby dolphin whole. “At the end of the day, it is work. It can get repetitive and it’s hard on your body. Some customers don't appreciate this stuff is fresh caught in the ocean.”

Hand-diving and similar practices are the only way to source urchins, so although they’re a sustainable food choice, their availability can be limited. Until the end of July, it’s spawning season and urchins are off the menu but come the end of August and into September they’ll be at their best. Here’s where to try them: 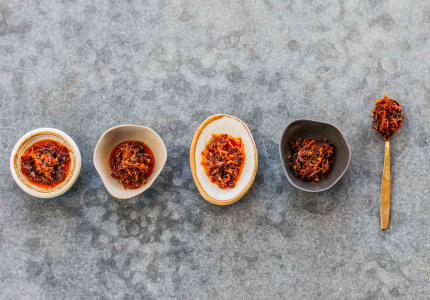