In Her New Cookbook, Rosa Cienfuegos Shares Her Secrets for Making the Perfect Tamale (and Tacos, Snacks and More)

For one thing, never make them when you’re sad, says one of Australia’s top Mexican chefs. Plus discover more goodies in her vibrant 200-page pop art-style book. 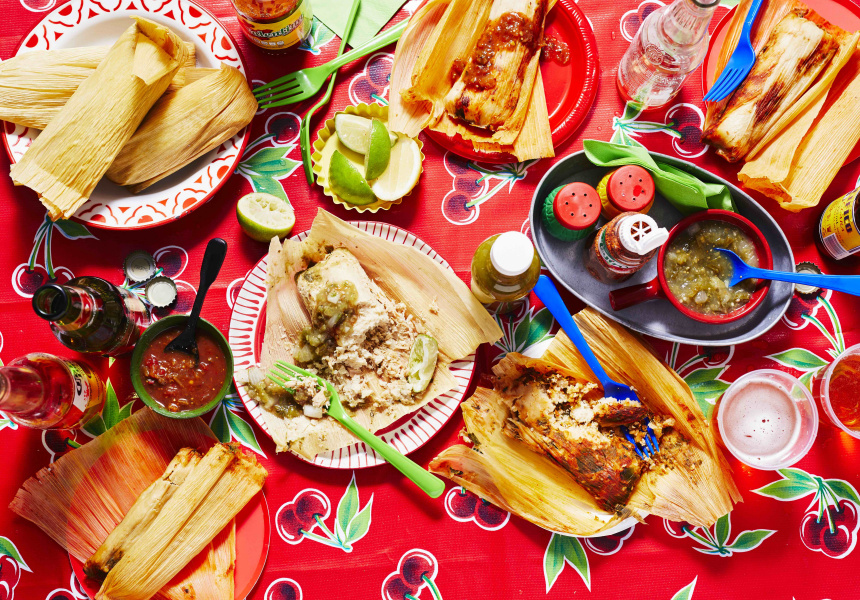 Roasa's dad Julio and Rosa Cienfuegos at her Sydney Tamaleria Mexican legend says you shouldn’t make tamales when you’re feeling sad or tearful, because your masa dough won’t float. And if the tamales are being made by more than one person, no one can leave until the dough is all used up.

“It’s funny, but believe it or not, it’s fucking true,” Rosa Cienfuegos tells Broadsheet. “Every time I have someone making tamales instead of me, my customers know. Even when I make the masa and the filling, and they’re just helping me to wrap, people know.”

It baffles Cienfuegos, and it’s been a point of discussion with her dad, Julio, who taught her how to cook Mexican food. (As for the floating thing: a small dab of dough will float in a glass of water when it's sufficiently aerated and ready to cook.)

It’s as though the tamale is imbued with the essence of the tamale-maker, and if the maker leaves before the process is finished, the essence is lost.

Tamales – filled, maize-based dough pockets that are steamed in corn husks – are a ubiquitous street food in Mexico City, where Cienfuegos grew up. “It’s like a very normal breakfast for Mexico City people,” she says. “It’s quick, cheap and really filling. You can grab one on any corner and it will keep your tummy full for a long time.”

Because they’re inexpensive and readily available, yet complex to make, tamales are rarely made at home, except on special occasions where it’s a communal enterprise involving a whole family. For those game enough to attempt what Cienfuegos says is the hardest recipe in her pretty, colourful new cookbook, Comida Mexicana, she’s given lots of examples.

There are recipes for savoury green tamales, poblano chilli tamales, sweet tamales and pineapple tamales. There are also tamales made with mole, a rich Mexican sauce containing chilli, dried fruits, nuts and lots of spices.

The green tamales are one of the most popular dishes at the Rosa Cienfuegos Tamaleria in Sydney’s Dulwich Hill, which is one of the best places to get authentic Mexican food in the city. It opened three years ago on the day of the local spring festival – a mariachi band played on the footpath (her dad’s band) and Cienfuegos attended to a queue that snaked out the door, handing out tamales and encouraging people to spoon more salsa on their plates from one of the enormous mortars that sat on the counter.

The colourful shop also sells a variety of dried chillis; bundles of corn husks; canned tomatillos; tortillas; and chilli sauces and seasonings such as Tajín (a mixture of salt, chilli and lime that’s delicious on everything from fruit to chicken). There’s also a small eat-in and takeaway menu of Mexican street-food classics. All the ingredients for the recipes in Comida Mexicana can be found at the shop.

Cienfuegos says writing the cookbook was a challenge, because the recipes are in her head – it’s hard to codify something that’s easier demonstrate in person.

For example, when she talks about making tamales, she mimes a patting motion, clapping her hands together and flipping them back and forth as though she’s passing a pat of masa between her palms. “I just know how to do these things. To explain it in English in a way that everyone can understand, that was the hardest thing for me. How do you translate … ?” she says as she holds her hands up and pats them together.

She consulted with her dad on every one of the 85 recipes. Julio left Mexico City 20 years ago to come to Sydney. He opened a restaurant, El Cuervo Cantina, and in 2010 Rosa moved here to help him. Writing the cookbook made Julio wonder how traditional some of the dishes are. For him, chicharrones preparados – large sundried crackers topped with iceberg lettuce, avocado, onion, cheese, cream and chilli sauce – isn’t traditional. In his day, they just put cream and salsa on top. “For my generation this is the thing we’d eat after school. There are many things that are new,” she says.

The book is also full of vignettes about life in Mexico City. Cienfuegos recalls picking up tortas de jamón con queso (ham and cheese bread rolls) on her way to school, and buying her son a jicaleta (sugar-dipped jicama on a stick) and having him smear the rainbow sugar over his face and hands.

It’s imbued with enough of her history, essence and wisdom that, with luck, your first tamale-making attempt might just resemble the neat packets that fly out the door of her shop each day. But if they flop and you’re in Sydney, she has plenty at the Tamaleria for you to take home.