This is a meatless take of a dish made with a “mythical sauce” at a community-run restaurant in Tuscany. You can make it vegan, the day before, and if you can’t be bothered with the layers, serve it with pasta or polenta. 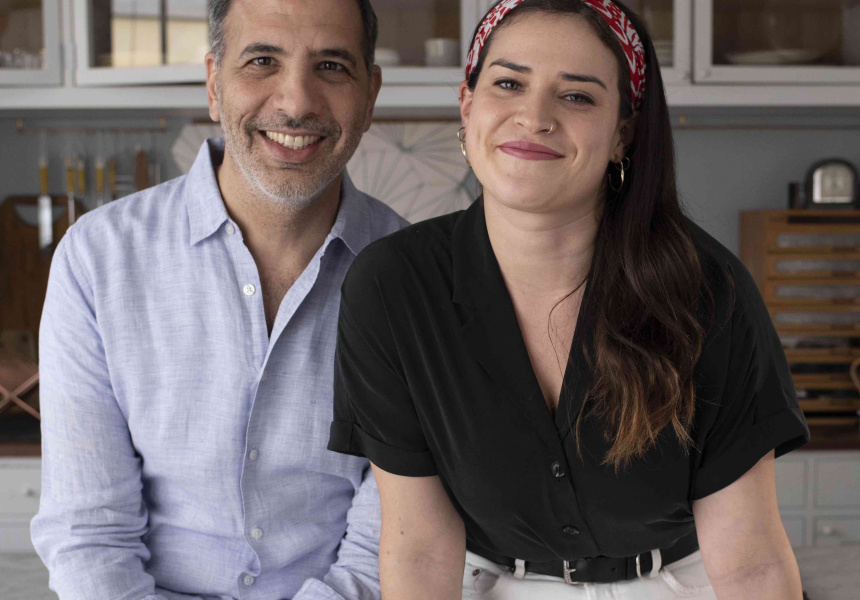 Cher. Madonna. Fabio. Bono. Oprah. Ottolenghi. There aren’t that many people to have joined the mononymous party, but the Jerusalem-born, London-based chef, author and restaurateur is perhaps famous enough to only go by one name. (Jamie and Nigella are probably other chefs on that list too).

Yotam Ottolenghi got that reputation by spearheading a global movement towards vegetable-based meals. In his column for the Guardian he elevated veggies to the main act, and made them with spices and ingredients a lot of the world weren’t familiar with – things such as pomegranate, rosewater, molasses, tahini, sumac and za’tar. (Interestingly, Ottolenghi only started writing vegetarian recipes after being assigned a vegetarian food column in the Guardian newspaper in 2006.) He's published seven cookbooks and his influence has even sparked a phrase: “The Ottolenghi effect”.

His spicy mushroom lasagna recipe comes from Flavour, which he co-wrote with Ixta Belfrage. She worked at Ottolenghi's NOPI restaurant in London, before helping him with his test kitchen and contributing to his columns for the Guardian and the New York Times. The book is the third instalment in Yotam's Plenty series, and is about celebrating the limitless potential of vegetables.

This recipe pays homage to penne all’Aconese, a dish Belfrage fell in love with. “It’s served at Ristorante Pizzeria Acone, a community-run restaurant in the Tuscan village of Acone, perched at the top of the mountain on which she spent her formative childhood years,” writes Ottolenghi in Flavour. “The recipe is a closely guarded secret, but the complex, earthy and deeply umami flavour of dried porcini mushrooms is impossible to miss. This is our meatless take on that mythical sauce.”

He says you can easily make this vegan – you just lose the cream. “It can also be made ahead and refrigerated, ready to be served with pasta or polenta, saving yourself the trouble of constructing the lasagne if you’re short on time.”

If you’re cooking for children you can also reduce the black pepper and not add the chilli. “If you want to get ahead, the lasagne can be assembled, refrigerated and then baked the next day (once it’s come back up to room temperature).”

Method:
Preheat the oven to 230°C fan. Put the chestnut and oyster mushrooms into the large bowl of a food processor in three or four batches and pulse each batch until finely chopped (or finely chop everything by hand).

Toss the chopped mushrooms in a large bowl with 3 tablespoons of oil and 1 teaspoon of salt and spread out on  a large, 40cm x 35cm parchment-lined, rimmed baking tray. Bake for 30 minutes near the top of the oven, stirring three times throughout, until the mushrooms are golden brown; they will have reduced in volume significantly. Set aside. Reduce the oven temperature to 200°C fan.

Meanwhile, combine the dried mushrooms, chillies and hot stock in  a large bowl and set aside to soak for half an hour. Strain the liquid into another bowl, squeezing as much liquid from the mushrooms as possible to get about 340ml: if you have any less, top up with water. Very roughly chop the rehydrated mushrooms (you want some chunks) and finely chop the chillies. Set the stock and mushrooms aside separately.

Put the onion, garlic and carrot into the food processor and pulse until finely chopped (or finely chop everything by hand). Heat 60ml of oil in a large sauté pan or pot on a medium-high heat. Once hot, add the onion mixture and fry for 8 minutes, stirring occasionally, until soft and golden.

Pulse the tomatoes in the food processor until finely chopped (or finely chop by hand), then add to the pan along with the tomato paste, 1 1⁄2 teaspoons of salt and 1 3⁄4 teaspoons of freshly cracked black pepper. Cook for 7 minutes, stirring occasionally. Add the rehydrated mushrooms and chillies and the roasted mushrooms and cook for 9 minutes, resisting the urge to stir: you want the mushrooms to be slightly crisp and browned on the bottom.

Stir in the reserved stock and 800ml of water and, once simmering, reduce the heat to medium and cook for about 25 minutes, stirring occasionally, until you get the consistency of a ragù. Stir in 100ml of the cream and simmer for another 2 minutes, then remove from the heat.

Combine both cheeses and both herbs in a small bowl. To assemble the lasagne, spread one fifth of the sauce in the bottom of a round 28cm baking dish (or a 30cm x 20cm rectangular dish), then top with a fifth of the cheese mixture, followed by a layer of lasagne sheets, broken to where necessary. Repeat these layers three more times in that order, and finish with a final layer of sauce and cheese: that’s five layers of sauce and cheese and four layers of pasta.

Drizzle over 1 tablespoon of cream and 1 tablespoon of oil, then cover with foil and bake for 15 minutes. Remove the foil, increase the temperature to 220°C fan and bake for another 12 minutes, turning the dish round halfway. Turn the oven to the grill setting and grill for a final 2 minutes, until the edges are brown and crisp.

Extracted from Ottolengh Flavour by Yotam Ottolenghi and Ixta Belfrage (Penguin Random House, $55). Spicy mushroom lasagne photo by Lousie Hagger. All other photography by Jonathan Lovekin. You can buy it here.