How do you perfect something as commonplace as fish and chips? In partnership with Yak Brewing, which just wrapped up an exhaustive search for Australia’s best pub meals, we talk to the chef at a harbour-side venue serving more than 1000 orders of fish and chips a week – for good reason. 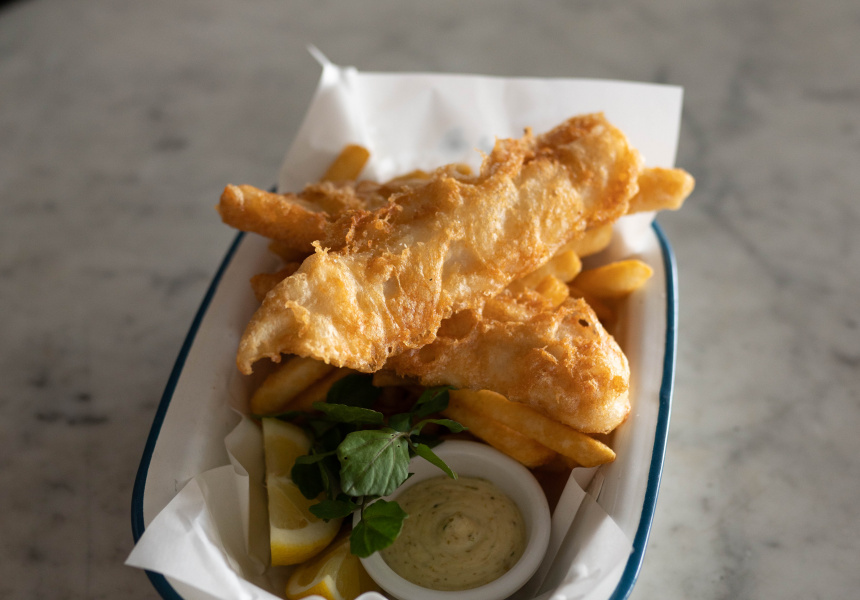 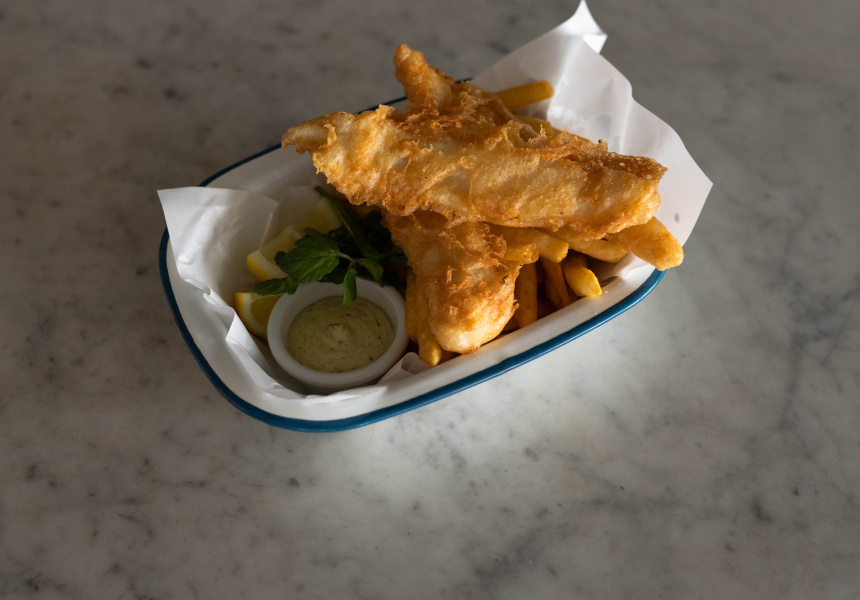 Fish and chips is an Australian staple, widely available all over the country. So what does it take to make people return for one restaurant’s version again and again?

“Consistency is key,” says Richard Slarp, senior head chef at Sydney’s picturesque favourite Watsons Bay Boutique Hotel. Slarp oversees the painstaking creation of more than 1000 plates of fish and chips each week. “Everything is made to order,” he confirms. “It doesn’t exist before the order starts. An area here is purpose built just to put out the fish and chips, so it’s efficient and they’re perfect every time. We have a lot of people coming back for them.” The history of fish and chips at Watsons Bay goes all the way back to 1883, when the original hotel was built and the harbour-side eastern suburb was a nascent fishing village. The hotel’s current take on the dish dates to 2013, when the venue was purchased by Fraser Short (the Sydney Collective) and Arthur Laundy. Demand is now so high the hotel devotes three chefs to making it, with another two for production.

This approach has proven successful, with the dish recently labelled one of the country’s best pub fish and chips by Yak Brewing. The brewer’s nationwide quest crowned champions in five categories: chicken parma or schnitzel, steak, burger, pork ribs, and fish and chips. From October 30 to November 6 in Melbourne, pub fare fans will be able to sample them all at a Melbourne pop-up called The Hungry Yak.

What makes the Watsons Bay iteration so special? It starts with the fish itself, a hoki fillet from New Zealand. “We pick it for its consistency,” says Slarp, who previously served as executive chef at Saké in The Rocks. “It fries well and is extremely sustainable, perfect for the job we need it for.” Next comes the house-made batter, which Slarp thinks is the undisputed hero of the dish. “To achieve that crispiness, we actually do a two-stage frying process,” he says, “first in a cooler fryer and then in the hot fryer to make it really crisp.”

For the chips, Watsons Bay opts for flavoursome 10 millimetre Edgell Supa Crunch. “They’re really crunchy on the outside and fluffy in the middle,” says Slarp. “We’ve played with a few different fries, but that’s the one that works the best.” Having fresh lemons growing right on the hotel’s doorstep is crucial to both the citrus garnish and homemade tartare sauce.

As with every other batch ingredient, that sauce is constantly being sampled for quality-control purposes. “We’re quite strict on it,” says Slarp. “It’s food people can trust. If you lose one element out of a four-component dish, you’ve lost the whole thing. We pride ourselves on doing the best job possible. I think with the repeat customers we have, and the distances they travel for it, we’re a fish-and-chip Mecca.”

Watsons Bay fish and chips is on the menu year-round, ideally paired with a schooner of crisp cider like Lumber Yak. Here’s how to make a version of the dish at home.

Method:
Place flour into mixing bowl. Add half the soda water and half the beer and blend with a stick blender until smooth. Add remaining liquid and stir until combined.

Method:
Place all ingredients into a blender. Pulse until just combined and parsley is still chopped, not blended.

Method:
Fill deep fryer with oil and preheat to 180 degrees. Place plain flour in a bowl, dipping each fillet of hoki and shaking off excess mixture. Place the fish in the bowl of beer batter then put straight into pre-heated deep fryer until golden brown, turning occasionally. Remove fish and drain on paper towel; repeat for all fish fillets. Then season each fillet well with salt.

To serve, add tartare sauce, watercress and a wedge of lemon. Plate with hot chips.

Here are the other shortlisted items from Yak Brewing’s pub meal quest.

Sandstone Point Hotel, QLD: Fish and Chips
The menu on this hotel looking out over Bribie Island, Queensland, is hugely influenced by the fresh seafood available literally on its doorstep. It’s fish and chips heroes beer battered fresh seasonal fish of the day and is served with crispy dill, spring onion, a garden salad and chips.

Fisherman’s Wharf Tavern, QLD: Crumbed Fish and Chips
Perched over the water along Seaworld Drive on the Gold Coast, this old school wharf tavern plates up a huge serve of fish and chips. The crumbed fish is coated in secret herbs and spices for an extra flavour kick.

Bayview Bar, WA: Battered Fish and Chips
This mainstay dish served on the Bunbury waterfront uses red spotted emperor in "triple YAK" beer batter served with Manjimup-steak cut chips and tartare sauce. Fans of “surf and turf” might like to know Bayview’s steak sandwich has twice been voted the best in the state.

This article is produced by Broadsheet in partnership with Yak Brewing. To try these pub meals, book your table at The Hungry Yak Restaurant pop-up at Riverland Bar, running from October 30 to November 6.