Produced by Broadsheet
in partnership with Australian Lamb.

A family lamb meal that holds its own outside the standard roast. In partnership with Australian Lamb, here’s your best chance of impressing the in-laws. Experimenting with new recipes when you’re hosting a family dinner can be tricky. You don’t want to get it wrong, but you don’t want to play it safe. A roast dinner might be an obvious win to impress the folks, but it’s not the only option.

Shane Delia, the chef behind Melbourne’s Maha and Biggie Smalls and host of SBS’s Spice Journey, thinks the traditional roast-lamb dinner is actually “a bit intimidating” for most people.

“I think people need to remove what they think of as the roast dinner and move away from the leg,” he says. “That’s where people [think too much]. ‘Oh, it’s overcooked, it’s undercooked’. So try [something else]. Lamb mince is quick and easy.”

Method: Heat a wok with 1 tbsp oil over high heat. Stir-fry the lamb mince, in 2 batches, until browned. Set mince aside. Reheat the wok over medium–high heat, add the remaining oil, and add the garlic, ginger, onion and celery. Stir-fry for 1 minute. Add the water chestnuts, corn, snow peas and Chinese broccoli, and stir-fry for 30 seconds.

Return the mince to the wok, toss for 1 minute. Pour in the combined plum sauce, soy sauce and 2 tbsp water, stirring as it comes to the boil. Meanwhile, cook the noodles according to packet instructions. Drain and drizzle noodles with the sesame oil. Serve the mince with the noodles, topped with green onions and sesame seeds, and Japanese mayonnaise, if desired.

This article is produced by Broadsheet in partnership with Australian Lamb.

Produced by Broadsheet
in partnership with Australian Lamb. Learn more about partner content on Broadsheet. Win a Lamb Feast for You and Five Friends at Asado 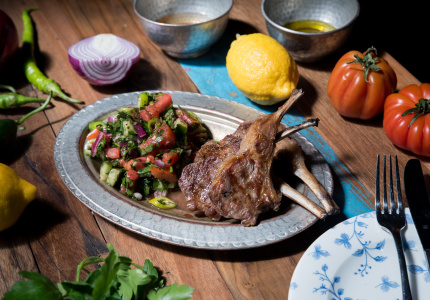