This dish, from the influential Aussie chef’s 18th cookbook, hails from Spain’s north-east. Its robust balance of flavours makes it an impressive crowd-pleaser. 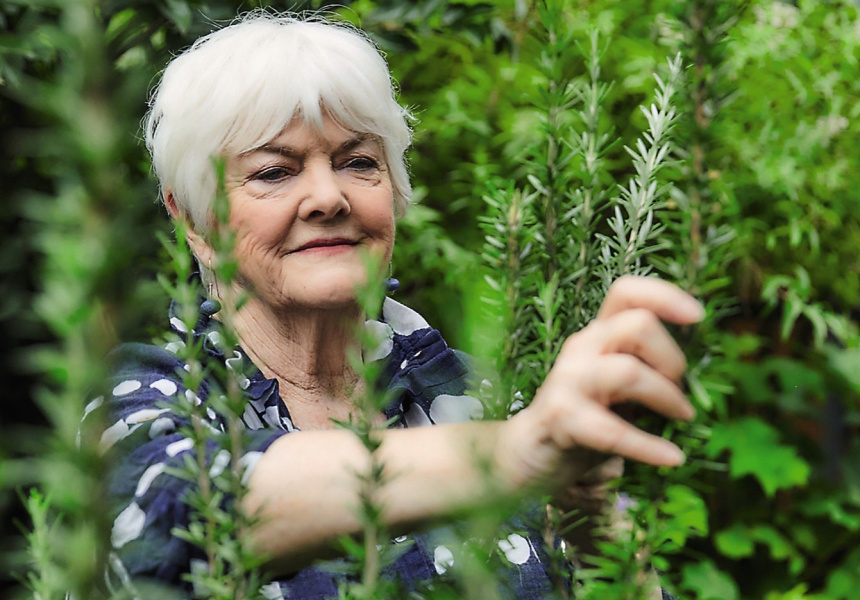 Most Aussie home cooks have a copy of Stephanie Alexander’s hulking The Cook’s Companion. Her fifth cookbook, referred to by many as the kitchen bible, was first released in 1996. Its colourful cover is probably faded (as is mine) and the pages splashed with sauces and spices (so many splashes).

So prolific is the book – and the 80-year-old's work with her Kitchen Garden Foundation – that Alexander has been a significant influence in shaping how Australians cook and eat more than many other people.

Her latest cookbook, Home, is her 18th book, and it might not be as big as that career-defining tome, but it’s got a stack of recipes that could easily feature in your after-work meal rotation or as a labour-of-love feast for an upcoming long lunch.

While Alexander’s basque-style chicken might not be a quick weeknight dinner, it’s most definitely not complex to make. It’s also not an arduous production, yet its robust balance of flavours makes it one to impress guests with.

The Medal of the Order of Australia recipient says it's based on the chicken dishes from Spain’s north-east, and recommends using a Maryland cut (the thigh joined to the drumstick). “For best flavour, the chicken needs to be cooked in the sauce for at least 45 minutes, maybe even for 1 1⁄4 hours, by which time if you had used breast meat it would be overcooked and dry. You could buy thighs only, in which case ensure that they are a generous size, still on the bone and with the skin intact.”

While you might be used to roasting the capsicums first and then peeling them, she suggests you should peel them before because it will result in quite a different textured sauce. She also says, “In keeping with the Spanish origins of the dish, you could substitute [the capsicums with] grilled piquillo peppers.”

“And I serve either steamed Spanish bomba rice (available from specialist food stores) or any other short-grain rice, or, more simply and not at all Spanish, a tangle of buttered pappardelle noodles cooked in the chicory cooking water for extra flavor,” she writes in Home.

Method:
The skin of peppers can be very indigestible. For best results I peel the skin from the peppers when they are raw using a speed (asparagus) peeler. Cut the top from each pepper and empty out the seeds. Cut each pepper into four pieces following the natural grooves. Peel using a relaxed zig-zag motion rather than ripping the peeler straight down each piece, which is likely to damage the flesh. Cut the peeled peppers into a 5mm dice.

Heat half the olive oil over medium-high heat in a heavy-based, deep flameproof casserole dish that has a lid. Add the onion and garlic and cook, stirring from time to time, for about 5 minutes until softened. Now add the peppers, chilli, paprika and bay leaves. Stir well and cover, reduce the heat and cook  for 20 minutes (10 minutes will be enough if you have chosen to use roasted peeled peppers or piquillo peppers). Stir in the tomato sauce and cook, covered, for another 10 minutes. Your sauce should be very moist with plenty of natural juices. Uncover, raise the heat and add the sherry vinegar.

Allow the vinegar to bubble up and evaporate quite quickly. Taste the sauce for spiciness. The chilli can be removed at this point if the sauce is spicy enough for you. If not, leave it in.

Now add the sherry, stock and half the water. Stir together, then cover and simmer for 15–20 minutes. The sauce will be fairly liquid at this point. Taste for salt and pepper. Set aside. You can let the sauce sit for several hours if you want to prepare it ahead.

Lightly season the chicken pieces with salt and pepper and the thyme leaves.  In a heavy-based frying pan, heat the rest of the olive oil over medium heat.  Put the chicken pieces into the pan, skin-side down, and adjust the heat so that there is a sizzle but nothing more than that. You are aiming for well-browned pieces. Do not shake or prod. Check after 6 minutes. If the skin is looking golden brown, turn the chicken and cook for a further 3–4 minutes. Remove the chicken pieces to a plate.

Bake the chicken, covered, for 20 minutes, then uncover and cook for a further  20 minutes. At this point check the sauce is nicely reduced and the chicken is looking golden and crisp-skinned. You can add a spoonful of the remaining water if the sauce is too dry.

While the chicken is baking, drop the prepared chicory into a saucepan of lightly salted boiling water for 2 minutes. Scoop the chicory stems from the water and squeeze any moisture from them with a dry cloth. Push the chicken pieces around in the dish to make room for the chicory. Bake for another 15–30 minutes or until the chicken is quite tender when tested with a skewer. It should slip through the thickest part of the chicken without resistance.

Home is by Stephanie Alexander and is published by Macmillan Australia, RRP $59.99, with photography by Armelle Habib. It comes out this week, from September 28. Buy it here.