Gilmore helms one of Australia’s best restaurants, Quay, but that doesn’t mean his version of this rich, classic dessert is hard to make. In fact, it’s surprisingly simple. 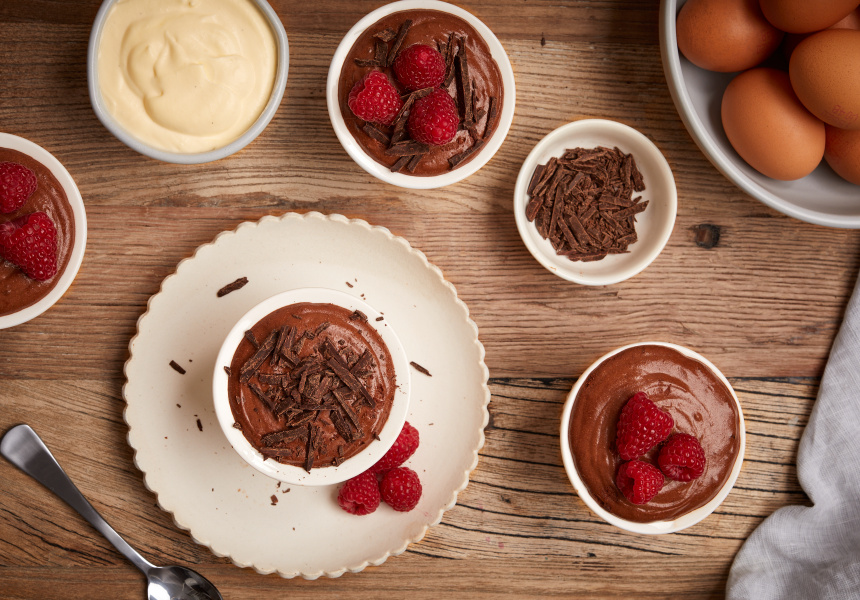 I know what you’re thinking: a chocolate-mousse recipe by Peter Gilmore, one of Australia’s greatest chefs, is going to be fiddly and difficult. After all, he’s the creator of one of the country’s most famous desserts, the Snow Egg, which came to prominence nationwide when it was the final challenge on the second season of Masterchef. But this dish isn’t hard at all.

Sure, it requires you to make a sabayon, but that’s really just a fancy word for beating egg yolks and sugar over simmering water until it thickens. It does take a little stamina, but you can always outsource that task to an electric hand-beater if you’ve got one.

The reason we know this recipe is simple is because we made it alongside Gilmore when he hosted a two-course Zoom cooking class earlier this month. Australian Eggs (an egg-industry advocacy group and website) invited him to show off the versatility of eggs, which he did with his son Joe from their elegant home kitchen. He made two classic egg recipes: a soufflé and this mousse.

Gilmore’s mousse requires way fewer steps than the dishes he serves at his Sydney fine diner, Quay, which is renowned for its luxury and focus on Australian ingredients. A Gilmore mousse you can eat in your own home is a pretty good way to channel that Big Restaurant Energy.

“It’s actually the same mousse recipe that I used in the nine-texture chocolate cake that was developed over 10 years ago at Quay and that we still serve at sister restaurant Bennelong today,” says Gilmore.

Some things to keep in mind when making this: the recipe says it’s good for four people, but it is very rich, so you could even stretch it to eight people. Gilmore suggests serving it in glasses – a champagne saucer would be perfect – but whatever you have in the house will be fine. Once we finished preparing the mousse we poured it straight into the glasses and put it into the fridge to set, but you can always set in a bowl and spoon it onto individual dishes if you want to serve it that way.

“You can eat it after an hour in the fridge if you want to, but I find it’s best when it’s had at least four hours of refrigeration,” says Gilmore.

Finely chop the chocolate and melt it over a double boiler to keep warm. Whip the cream until soft peaks form.

Make a sabayon by combining the egg yolks, sugar and vanilla bean. Cook over a double boiler, whisking continuously until the egg yolks become thick and glossy, then remove the sabayon from the heat. Have the whipped cream ready nearby.

Pour all of the melted chocolate into the warm sabayon and, with a large hand-whisk, beat as fast as you can to incorporate all the chocolate. The chocolate will begin to seize – at that point you’ll need to add 1 large kitchen tablespoon of whipped cream.

Continue to whisk. The cream will help soften the mixture. Add another large spoonful of cream and whisk vigorously for another minute. The chocolate, egg and cream mixture will now be more workable and relatively stable. You should have half the whipped cream left.

Immediately whisk the egg whites until soft peaks form. Place the whisked egg whites and the remaining cream on top of the chocolate mixture and gently fold through until well incorporated.

Place the mousse in the refrigerator for a minimum of 4 hours before serving. Once the mousse has set, serve with fresh raspberries.