Thailand’s national dish is beloved in Australia. Here the restaurateur-turned-farmer makes a version you’ll have on the table in under 30 minutes. 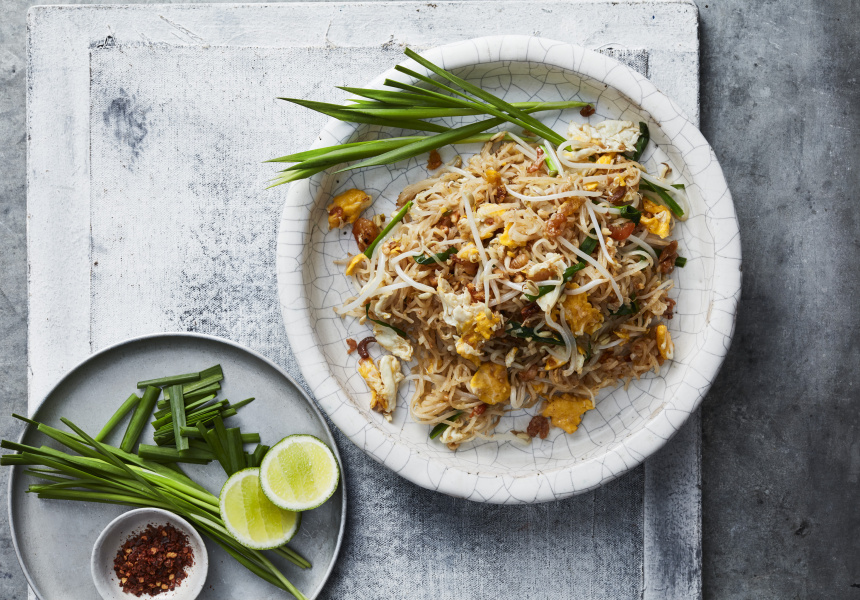 Palisa Anderson and her husband Matt live in Byron Bay’s lush hinterland at Boon Luck Farm, where they grow Asian produce you can’t often find elsewhere in Australia – think peanut butter fruit, jujubes, miracle fruit and much more. They supply local restaurants and top eateries in the big cities, as well the Chat Thai group of restaurants in Sydney, which was established in 1989 by her pioneering restaurateur mum Amy Chanta.

Anderson helped expand the empire as well as create the family-run Thai grocer Jarern Chai and Boon Cafe, a fusion cafe by day, and traditional Isan eatery by night, in Sydney’s Haymarket. She is a weekly contributor in the food and gardening section of The Guardian, and now also adds TV host to her resume.

Palisa Anderson’s Water Heart Food is a five-part series on SBS where Anderson travels across Australia chatting to, and cooking with, chefs, such as Barbados-born Paul Carmichael of Sydney’s Momofuku Seiōbo and Josh Lewis of Fleet, in NSW’s Brunswick Heads. She goes foraging for native ingredients with Minyangbal woman Arabella Douglas, who supplies restaurants with wild delicacies, and shares food memories with her friend and singer-songwriter Mahalia Barnes (daughter of Jimmy Barnes).

This is one of the dishes she makes on the show and Anderson tells Broadsheet pad thai is something she’s always eaten. “My mother taught me how to make it and now my children always ask for it when they come into the restaurant. Pad thai is a quick noodle dish that was traditionally a worker’s lunch and there have been so many ways that it’s been made to be fancy,” she says.

She says in Thailand you would never see it made with protein, which is why she prefers hers with tofu. “It’s a middle Thai region dish [made] with bean sprouts, garlic chives and dried shrimp that pulls from all the regions of Southeast Asia. It was made not to be spicy so everyone could eat it. But if you get it in Thailand, there would be dry chilli powder on the side.”

And while it might seem like something that’s been around for centuries, Thailand’s national dish was invented in the 1940s because the government wanted to encourage patriotism.

“But even in this seemingly very patriotic Thai recipe there are remnants of the whole region, which I find just fascinating. The rice noodles are actually Vietnamese influenced (the type of rice noodle they use has rice and tapioca). And the pickled turnips are a very Chinese ingredient,” she says.

Anderson offers a couple of different options for ingredients depending on what you have in your pantry, one of which is light soy sauce or a gluten-free liquid protein concentrate, Braggs Aminos, made from soybeans.

And like all food cooked in a wok – preparation is essential because once the cooking starts, it all happens quickly.

Method:
Make the seasoning by combining the Braggs Aminos (or light soy sauce), dark soy (or kecap manis sauce), tamarind puree and coconut nectar (or palm sugar) in a bowl and mixing until well incorporated. Set next to the stove.

Heat 1 tbsp of oil in wok on high heat, until it starts to smoke a little, add beaten egg. Stir occasionally. After it’s cooked, around 1 minute, remove and set aside. Into the same wok add 1 tbsp of oil and again heat til slightly smoking, add tofu. Stir and cook evenly until brown.

Add noodles and seasoning. Keep on high heat and stir or toss until noodles are evenly coated and the sauce has evaporated. Add the pickled turnips, peanuts, egg, garlic chives and bean sprouts. Toss and stir through till all ingredients are well distributed. Turn off heat, serve immediately with lime wedge.

Palisa Anderson’s Water Heart Food is now showing on SBS on Sundays at 7pm, or on SBS On Demand.